The property of a magnetic circuit that opposes magnetic lines of force is known as reluctance.

The magnetic material's reluctance varies with flux density.  The unit for magnetic reluctance is ampere-turns / Weber (AT / Wb) or inverse Henry (H-1). Reluctance in magnetic circuits is similar to resistance in electrical circuits. Reluctance is calculated by applying the following formula:

Example: What is the reluctance in a circuit with a magnetic flux of 1 mWb and a total circuit mmf of 1750 ampere-turns? 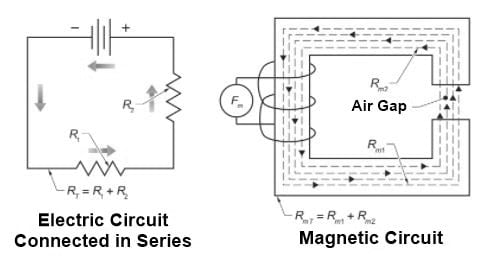 Figure 1. In a magnetic circuit, reluctances add together in the same way as resistance in an electric circuit connected in series does.

Reluctance in a magnetic circuit with several paths in series can be calculated by applying the following formula:

1.       Calculate magnetomotive force (mmf). The mmf is calculated by applying the following formula:

2.       Calculate the intensity of magnetizing force.

\(H\) = intensity of magnetizing force in ampere-turns per meter

Example: What is the intensity of magnetizing force for a conductor carrying 100 mA with 1000 turns over a 10 cm length?

Calculate the intensity of the magnetizing force.

Example: What is the magnetic field intensity (in Oersted) at a distance of 15 cm from the center of a straight conductor carrying 2.25 A?

Magnetic field intensity at the center of a flat circular coil with current flowing through it is calculated by applying the following formula:

Example: What is the magnetic field intensity at the center of a flat circular coil of 500 turns that is 20 cm in diameter and carries 3 A?

A gauss is equal to one line of force per square centimeter. Gauss (G) measures the amount of density for magnetic lines of force (flux density). The Earth's flux density is about 1 G at the surface. Flux density is calculated by applying the following formula:

The above equation assumes that the surface with area A is perpendicular to the field lines and the field is uniform over this area.

Example: What is the flux density of a cube that has lengths of 10 cm and magnetic lines of force of 1×10-8 Wb?

Variation in the intensity of the magnetizing force (H) applied to nonmagnetic substances results in a proportional increase or decrease in the flux density (B) and shows a linear relationship between B and H.

This relationship is not true for magnetic substances. The density of the magnetic lines of force of a magnetic substance depends on the permeability of the substance and the amount of ampere-turns per unit length. The permeability curve of a ferromagnetic material is nonlinear. Figure 2 shows the magnetization curves for three different types of material. The flux density rises quickly at the beginning of the magnetizing process and at a greatly reduced rate afterward. At some point, a magnetic saturation occurs. Magnetic saturation is the point at which a further increase in current does not cause a further increase in the number of magnetic lines of force. 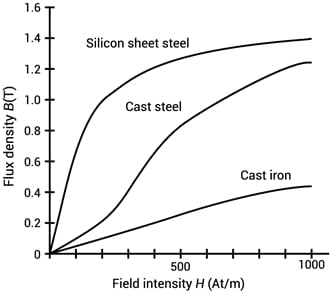 Example: What is the permeability of a substance that has a field intensity of 2000 ampere-turns per meter and a flux density of 12.5 T?