To check a circuit, two of the factors that should be taken into account are continuity and resistance. The test required determines the type of testing device to be used.

Low-value resistance testers can range from elementary to quite complex. The choice often depends on the degree of accuracy required.

For simple continuity testers, all that is required is a low-voltage source of power and an indicator, for example, a 6V battery and a 6V lamp or buzzer. Two test leads, the lamp, and the battery are connected in series and, when testing a circuit, the continuity of a conductor is indicated when the lamp lights.

This type of tester has the advantage of being simple, easily made up when required, and inexpensive. The disadvantages are that regular battery replacement is required, and the low voltage may not provide sufficient power to give a positive indication when the circuit is complete but contains an appreciable amount of resistance. In this case, the lamp may not light and falsely indicate an open circuit.

Whenever circuits and test equipment indicate a possible fault is present, further testing is necessary. More sophisticated equipment might have to be used to indicate the extent and type of the problem. It may well be that resistance is present in the circuit, giving a doubtful indication. The fault might be more extensive than that, of course, and that is the purpose of the testing function.

One attempt to get around this problem was the introduction of small hand-cranked generating sets used in conjunction with a suitable bell. When the crank was turned, and the test leads touched together, the bell would ring.

The voltage was often around 150V but was also AC. Costlier than a battery and a buzzer, the system was rugged, still relatively simple to use, and operated on low resistances. Excellent for checking out multiple conductors in a new installation, it also had one big disadvantage. Since it worked on AC, its indication was subject to high inductances in the circuit path. No indication would be given under some circumstances.

There are two basic types of ohmmeter circuits—series and parallel. The name relates to the position of the unknown resistance in the circuit. A series circuit has the unknown resistor connected in series with the meter. A parallel ohmmeter circuit has the unknown resistor connected in parallel with the meter. Each connection has its own advantages. Both circuits can give continuity checks as well as indicate relative values of resistance. Unlike the continuity testers mentioned above, no audible or visual indication is given. A meter scale has to be read.

The series circuit is the most common and is shown in Figure 1(a). It consists of a battery, a fixed resistor, and an adjustable resistor. The fixed resistor is a current-limiting resistor to provide some form of protection for the meter. It is often called a ballast resistor. 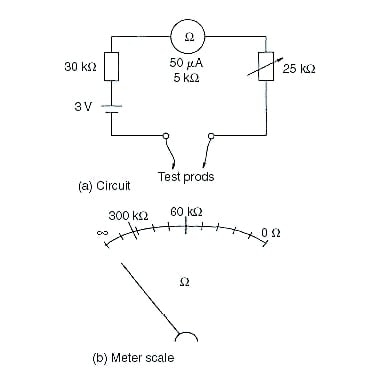 Figure 1(b) shows that the meter scale is the reverse of that of a normal scale. Zero ohms (0Ω) is indicated at full-scale deflection and infinity at the zero ends. It should also be noted that the scale is non-linear.

A typical circuit for a parallel ohmmeter is shown in Figure 2(a). It includes a switch to ensure that the battery is not left on when the meter is not in use. This is usually done with some type of trigger or finger-operated switch. The idea is that when the leads are put down, the battery is automatically switched off. 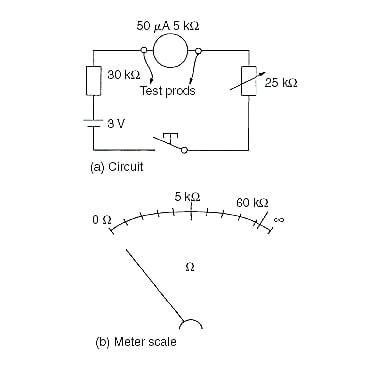 The meter scale is shown in Figure 2(b). It is also non-linear, but the values progress across the scale in a normal manner. For comparison purposes, the indicated position for the 60 kΩ resistors is marked on the scale at a position corresponding to 46 μA. Half-scale or 25 μA then corresponds to 5kΩ.

The 300kΩ position is not shown but corresponds to a current of 49.2μA. This would be indistinguishable from a full-scale reading. If the two half-scale values are compared, it can be seen that the parallel-type circuit is better suited to lower values of resistance than the series-type circuit.