Analogue and serial output IC temperature sensors may be accurate at room temperature, but at hot or cold extremes the accuracy can decrease nonlinearly. Normally, that nonlinearity has a parabolic shape, which means an equation can be derived to describe the typical nonlinear characteristics of the sensor. This, in turn, can be used to determine compensation for the sensor's accuracy error over a specified range of operating temperatures.

Silicon characterisation data can be used to determine the nonlinear sensor characteristics. From these data, an equation can be derived that describes the typical performance of a sensor. When the corresponding coefficients for the equation are determined, the coefficients can be used to compute the compensation for the typical sensor’s nonlinearity. 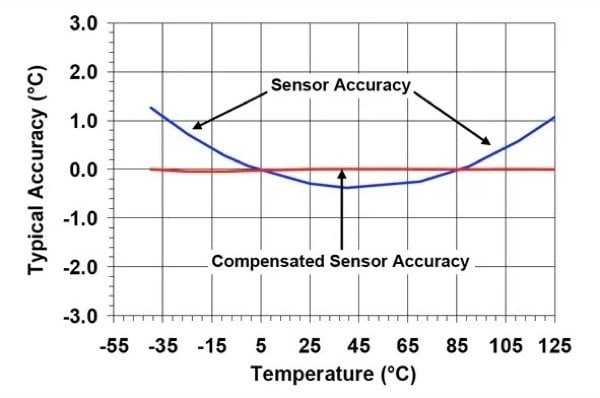 Figure 1: Typical sensor accuracy before and after compensation

The typical sensor accuracy over the operating temperature range has an accuracy error curve. At hot and cold temperatures, the magnitude of the error increases exponentially, resulting in a parabolic-shaped error curve.

To reduce dependency on the saturation current, two diodes were used. If both diodes are biased with constant forward currents of IF1 and IF2, and the currents have a ratio of N (IF2/IF1 = N), the difference between the forward voltages (∆VF) has no dependency on the saturation currents of the two diodes; ∆VF is also called voltage proportional to absolute temperature (VPTAT).

VPTAT provides a linear voltage change. The voltage is either amplified for analogue output sensors or is interfaced to an analogue-to-digital converter for digital sensors.

The accuracy of VPTAT over the specified temperature range depends on the matching of both forward current and saturation current of the two sensors. Any mismatch in these variables creates inaccuracy in the temperature measurement. The mismatch contributes to the temperature error or nonlinearity. The nonlinearity can be described using a second-order polynomial equation.

Once the error slope is calculated, the corresponding offset can be determined at cold by adjusting the error at cold temperature.

To capture the parabolic-shaped accuracy error between the temperature extremes, a second-order term and the corresponding coefficient must be computed. 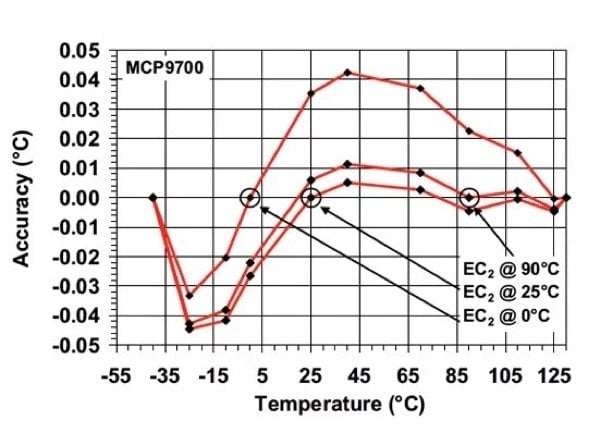 Calibration of individual IC sensors at a single temperature provides superior accuracy for high-performance, embedded-system applications. If the MCP9700 is calibrated at +25˚C and the second-order error compensation is implemented, the typical sensor accuracy becomes ±0.5˚C over the operating temperature range.

A PIC MCU can implement the second-order accuracy error compensation for embedded temperature-monitoring systems. The equation is relatively easy to implement in a 16bit core MCU since built-in maths functions are readily available. However, 12 and 14bit cores require firmware implementation of some maths functions, such as 16bit add, subtract, multiply and divide. Figure 3 shows the firmware flowchart. 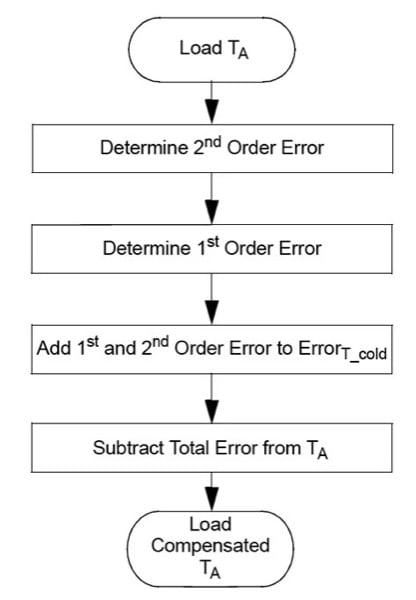 MCP9800 and MCP9700 demo boards (MCP9800DM-PCTL and MCP9700DM-PCTL, respectively) were used to evaluate the compensation firmware. A constant temperature airstream was applied directly to the temperature sensors. A thermocouple was used to measure the air stream temperature and compare the sensor outputs.

The nonlinear accuracy characteristics of a temperature sensor were compensated for higher-accuracy embedded systems. The nonlinear accuracy curve has a parabolic shape that was described using a second-order polynomial equation. Once the equation was determined, it was used to compensate the sensor output. On average, the accuracy improvement using compensation is ±2˚C for all tested devices over the operating temperature range.

The compensation also improves the wide temperature accuracy specification limits at hot and cold temperature extremes. A PIC MCU can compute the equation and compensate the sensor output using firmware.

Ezana Haile works as the Principal Applications Engineer and New Product Architect at Microchip Technology. He is responsible for supporting thermal management products such as temperature sensors, resistance temperature detector or RTD solutions, thermocouple solutions including firmware, hardware or software development. He is particularly skilled in the field of integrated circuits, embedded systems and mixed signals. He is a graduate from St. Mary's University located in San Antonio, Texas, USA.