How Long will Your System Last A Discrete IGBT Reliability Study

How Long will Your System Last A Discrete IGBT Reliability Study

High quality and reliability are among the key aspects in the design of a power semiconductor. The influence of these parameters is evident since they

High quality and reliability are among the key aspects in the design of a power semiconductor. The influence of these parameters is evident since they not only affect the lifetime and location of the application, but also the reliable operation under maximum power and high-load current levels.

To evaluate the performance of advanced chip, bonding and packaging technologies, the power-cycling test is a good practice. Models for power semiconductors were introduced in the late 1990s, which could predict the lifetime of the product, however, the focus of such tests was on power modules. In the last few years, applications for discrete packaged IGBTs have increased. Such applications as UPS (Uninterruptible Power Supplies), solar inverters, low-power industrial drives, induction cooking, and EV chargers have emerged, where designers require more information on the reliability and lifetime of their power system.

For the test runs, a set of eleven devices from Infineon’s broad spectrum of 1200 V, 650 V and 600 V IGBTs in TO247 packages were chosen to cover all identified aspects that could influence the power-cycling capability. The main aspects included the IGBT voltage class and the nominal device current (Figure 1). These parameters have a direct relation to the device area via static power losses, and to the bonding scheme via specified device current. In all runs, the bill of material for the TO247 package remained unchanged. All devices under test were assembled with the same mold compound and the same bond-wire diameter. 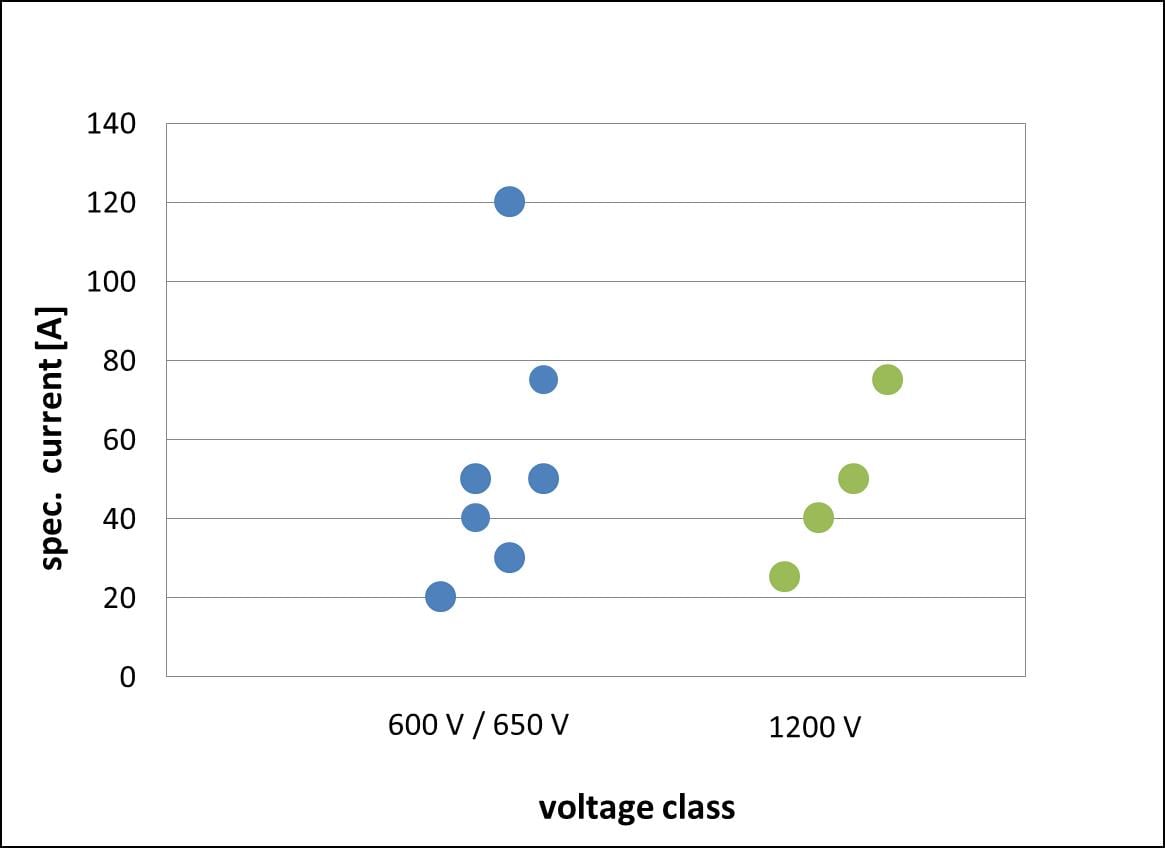 The aim of this first run was to identify the main contributors to the power-cycling capability besides the Coffin-Manson law and temperature dependence as described in Ref. [2]. Therefore, the tests were performed under similar conditions, a temperature swing of ∆Tj ~ 90°C, a mean junction temperature Tjm ~ 105°C, and load pulse on duration ton = 2 s and load pulse off duration toff = 4 s. This parameter set covers the standard applications for these IGBT families and has the advantage of performing the tests close to the specified device current.

The chip temperature was measured via the Vce(T) method. Based on the test concept, the maximal junction temperature cannot be measured directly at switch-off; for a reliable measurement, the delay was set at 500 µs. The finite element simulation (FEM) shows that the devices used in this test run cool down for about 1.1°C in 500 µs at a power loss of 1 W/mm2 per active area as shown in Figure 2. 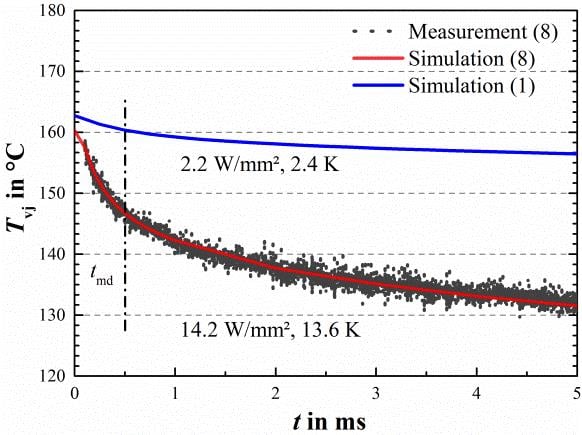 For data evaluation, the measured junction temperatures were corrected accordingly, and then in a second step, normalized to the same test conditions ∆Tj = 90°C and Tjmean = 105°C. This was done using a Coffin-Manson exponent of α = -3.56 and an activation energy Ea = 0.168 eV. The Coffin-Manson exponent and the activation energy were determined in the second run of experiments using a device with single-bond wire and single-bond foot. Details of the parameter extraction are described in Ref. [3]. To analyze the end-of-life failure mode, all parts were examined via a scanning acoustic microscope (SAM).

No degradation of the solder chip interface was found. However, a strong degradation of the interface between the bond foot and the IGBT chip surface was discovered, as shown in Figure 3. The nonstressed bond foot of the diode remains dark (chip on the right); the stressed bond foot of the IGBT becomes bright. Furthermore, some end-of-life (EOL) stressed devices were opened to inspect the bond wire. For complete bright contact areas seen in the SAM, bond lift-off as end-of-life failure mode could be confirmed (Figure 4); for SAM pictures with remaining dark areas, bond-wire heel cracks were observed (Figure 5). 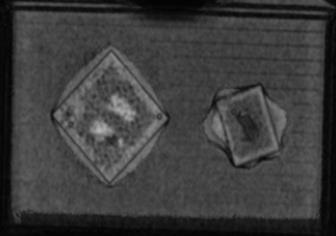 Figure 3: SAM picture of the chip, front side: Non-disturbed bond wire foot remains black for the diode; the complete bright area for the upper IGBT bond wire foot indicates bond wire lift-off. This is in confirmed after removal of the mold compound (decap), Figure 4. 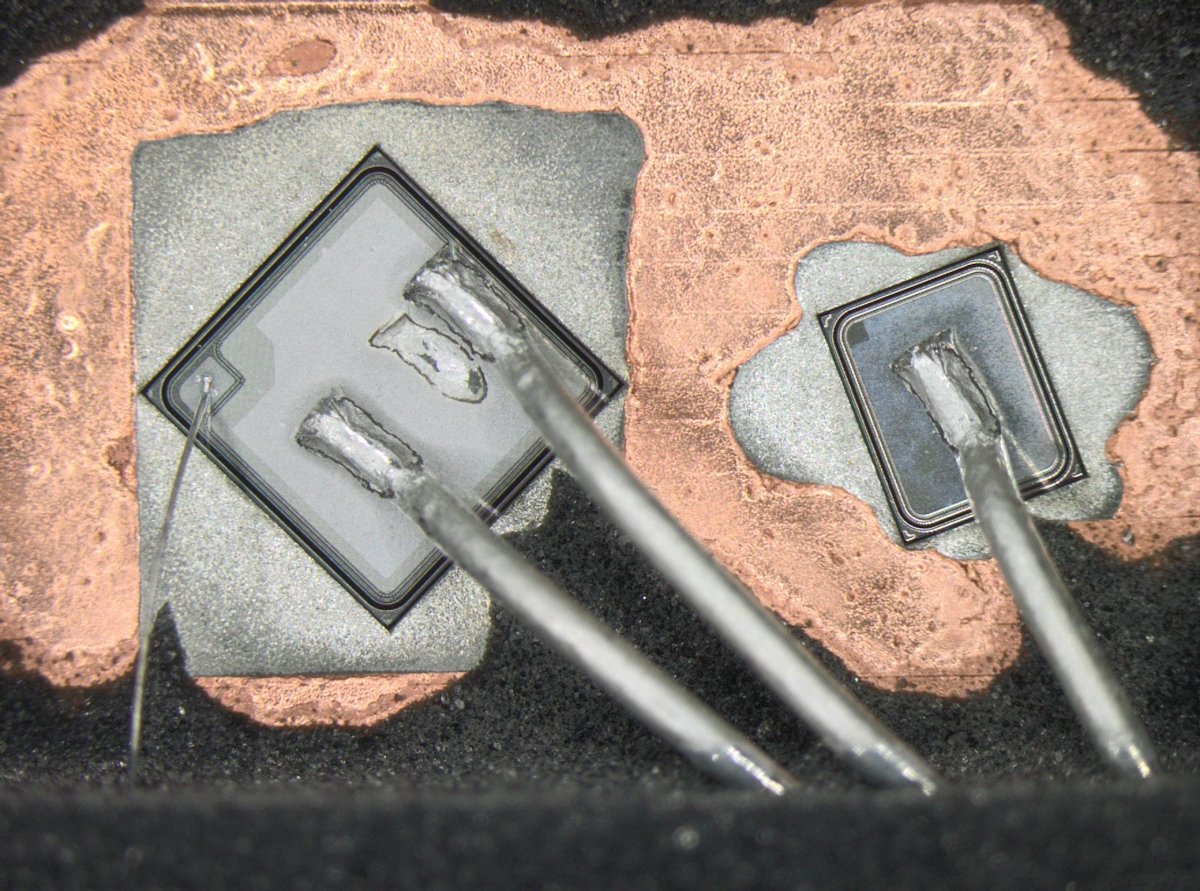 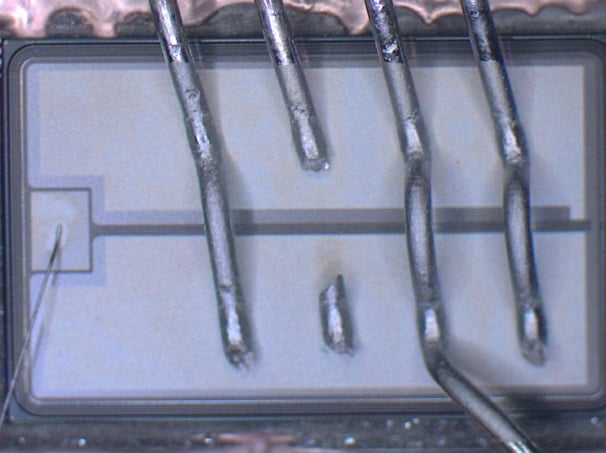 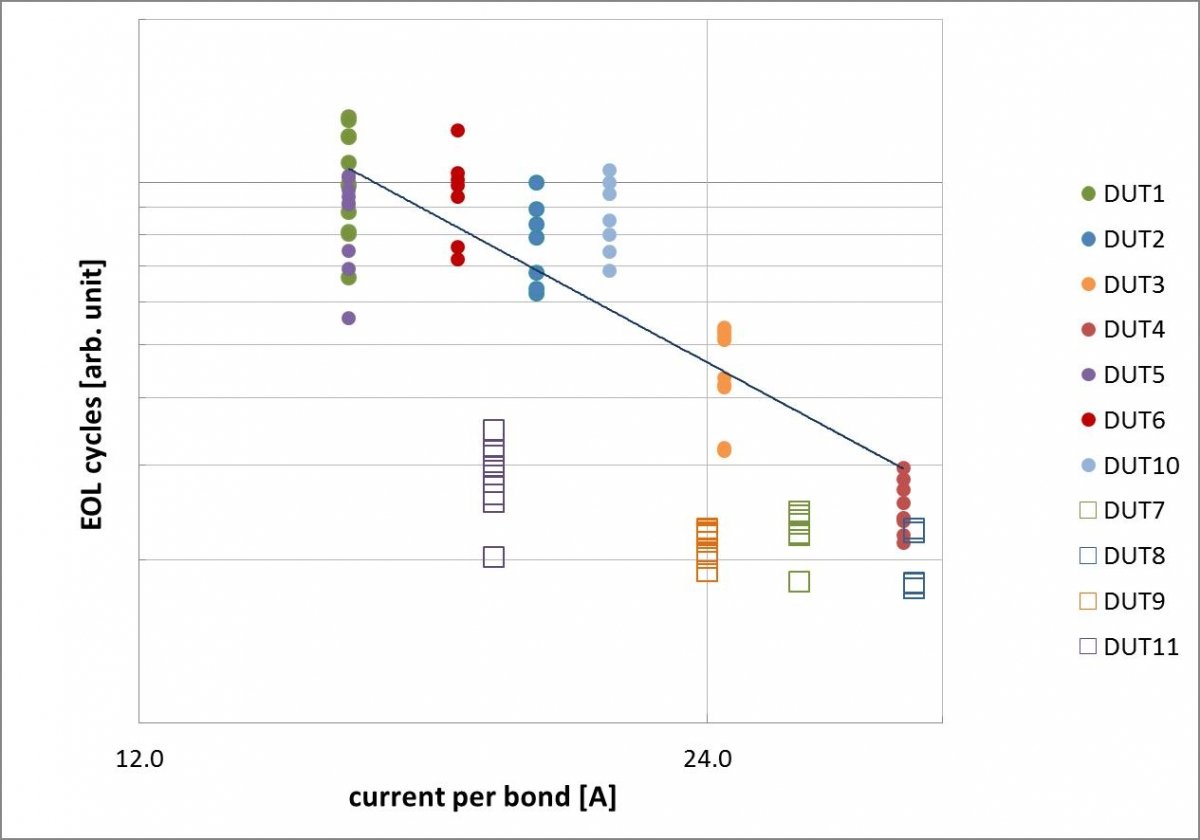 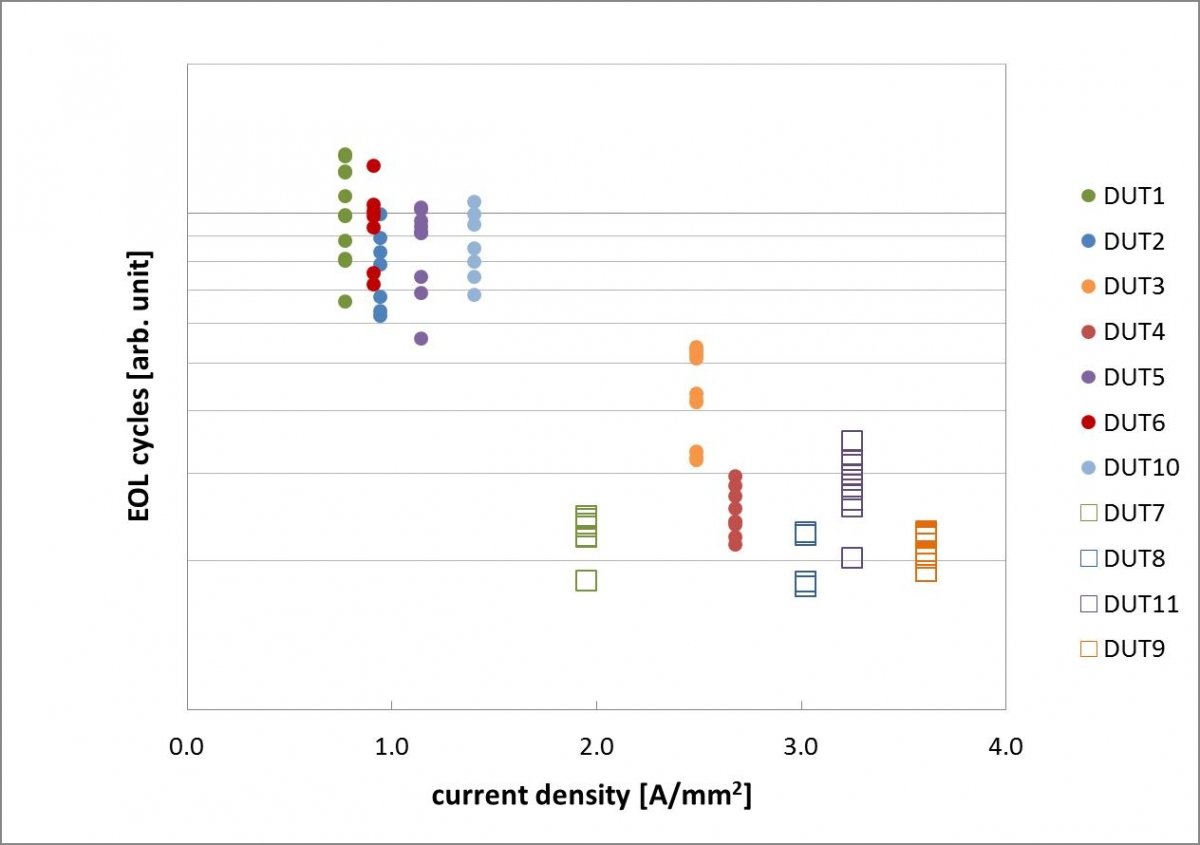 Figure 7: EOL cycles for the tested devices depending on current density.

At comparable power densities, 600 V / 650 V IGBTs achieve higher current densities than 1200 V IGBTs (Figure 8) caused by the higher Vce saturation voltage for these IGBTs. Our data show that testing in the higher current density regime tends to promote wire lift off as a failure mechanism that limits cycle number before heel crack may set in. A model to understand this correlation has still to be developed.

To provide a power cycle curve for Infineon’s 600 V / 650 V IGBTs, all groups with bond lift-off, marked in Figures 5 and 6 as squares, were taken into account, and no corrections for e.g. current density or current per bond wire were made. Figure 7 shows the corresponding accumulated Weibull distribution of the achieved cycles. The overall linear behavior indicates that no additional parameter influences the power cycle capability. Using the data from the linear fit, we can deduce the power cycle diagram for Infineon’s 600 V / 650 V IGBT devices in TO247, as shown in Figure 10. Depending on the temperature swing, three different EOL percentage curves for a Tjmean = 80°C temperature are plotted. They are valid for pulse durations of < 10 s. For much longer pulse times, it is expected that the EOL cycle number will be limited to solder fatigue of the chip backside solder, but this was not proven in the study. 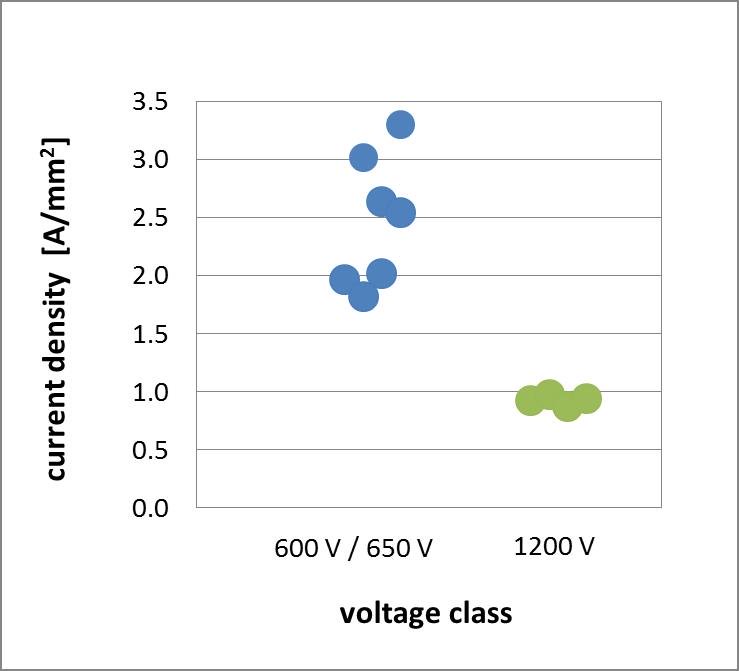 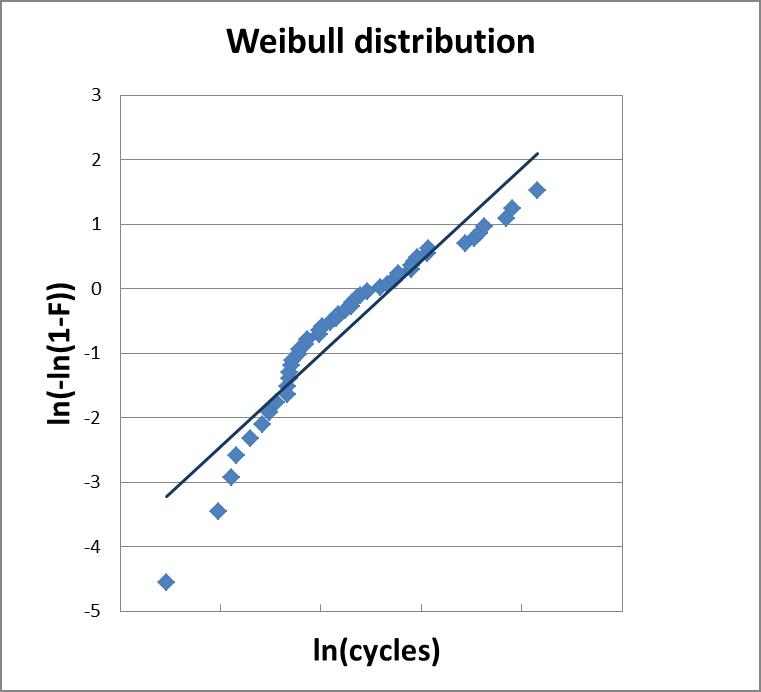 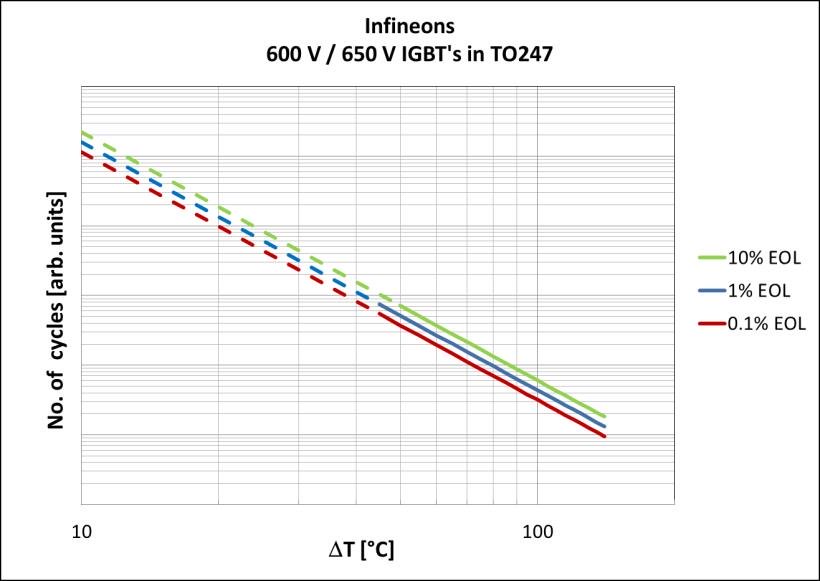 In this work, two series of power cycling tests were performed on eleven different device types in TO-247 package and more than 110 devices were tested until end of life. The devices have failed during the power cycling tests with bond wire failure. In the first test series the load current per bond or load current density was found to have a great impact on the power cycling capability of TO-247 package. In the second test series the dependency of lifetime on junction temperature swing ∆Tj and mean junction temperature Tjm was investigated and the deduced model for Infineon’s 600 V / 650 V IGBT in TO247 is available on request to provide users with the power-cycling capability for different application conditions. A similar model for Infineon’s 1200 V devices In TO247 will follow soon.

The authors gratefully thank Oliver Wenzel and Prof. Josef Lutz from the Technical University of Chemnitz for their support and discussions during the experiments, and further Karina Rott and Herbert Hopfgartner from Infineon Technologies for their support in organizing and running the project.