This article discusses the concept of universal inductive energy transmission and its possible applications and implications.

With the development of a universal inductive charging system, Finepower GmbH near Munich underpins its leading position in power electronics and battery charging. After numerous developments of off- and onboard chargers in the fields of industry and electric mobility, Finepower is now focusing on improving the charging technology of tomorrow.

EPCOS AG, a manufacturer of transceiver and receiver coils for inductive charging systems, is involved as a partner. Special attention is paid to the electromagnetic compatibility (EMC) of universal systems. In addition, the Technical University of Munich (TUM), Department of Energy Conversion Technology, and the Kempten University of Applied Sciences, as well as the Technology Network Allgäu (TNA), are providing fundamental research support.

One of the main objectives in the development of a universal inductive charging system is to allow the highest possible tolerance in the vehicle position. If different vehicle types are to be charged wirelessly, different positioning of the coils on the station side and on the vehicle side cannot be avoided due to the vehicle dimensions alone, but above all also due to the different receiver coil geometries and configurations.

Another reason for the highest possible positioning tolerance is the fact that it is often not possible—especially due to parking and waiting restrictions at public charging points—to position the vehicle exactly right in order to enable optimum energy transmission, either by means of an electronic parking positioning system or manual maneuvering.

A system for parking positioning causes additional costs when purchasing an electrically powered vehicle. In addition, such a positioning system can fail, which could lead to a considerable waste of time for the driver or completely prevent an inductive charging process.

By implementing the above-mentioned objectives, it is conceivable to use such a charging station at conventional filling stations, public places such as multistory car parks in shopping centers, airports, railway stations, but also for short-term intermediate charging, for example at red traffic lights or motorway service stations. In such cases, due to the short duration of the energy transfer, full charging of the battery storage is not possible, but nevertheless, this increases the range of the vehicles without any additional expenditure of time for the driver, since all these downtimes occur independently of the charging requirement of the vehicle.

Since complete charging is not possible due to the limited length of stay, it is particularly important to start the charging process as quickly and straightforwardly as possible, even if this could represent a loss of performance in inductive transmission.

Motorway Service Stations will Gain Importance for Mobility in the Future

The following rough calculation is intended to illustrate the power transmission that can be expected with short downtimes and poor positioning: A vehicle stands on a highway service area. The parking time should amount to 10 minutes. For example, if a charging station with a nominal capacity of 22 kW is provided and the vehicle stops offset from the transmitting coil, it should be assumed that a charging capacity of 10 kW is still possible. This results in an energy input of approx. 1.7 kWh into the vehicle for the assumed downtime. Taking a total capacity of a typical vehicle battery of 30 kWh into account, this corresponds to about 5.7 % recharging; assuming a total range of 150 km, this would amount to about 8.5 km. However, if the vehicle comes to an optimum stop, recharging of 11.4 % or 17 km would be possible. 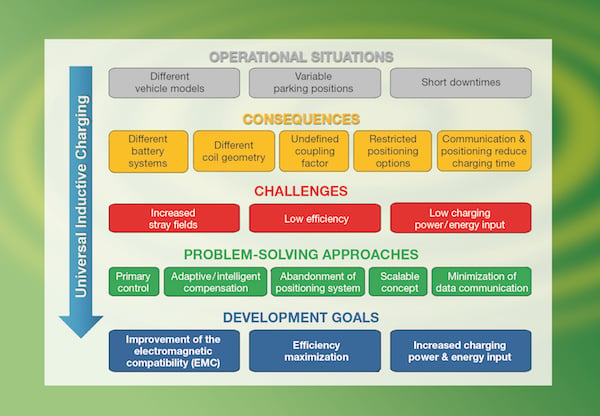 Figure 1. The operating situations and challenges of inductive charging as well as the approaches and objectives of the joint project.

From a technical point of view, there is no reason not to install even higher charging capacities. The downtime in other cases, such as when shopping or doing similar things, is even considerably longer and ranges from 30 minutes to several hours, so that, according to the above example, recharging quantities of 17.1% (30 minutes) to 68.4% (2 hours) respectively 25 km (30 minutes) to 100 km would be achieved in a bad parking position. The basic idea is that the driver does not have to carry out any additional tasks other than finding a suitable parking space, and that one and the same charging station can be used for a variety of different vehicle types.

In order to compensate for or to avoid the variance of the positioning elaborate methods have been used up to now in order to always keep the coil positions relative to each other as optimal and constant as possible. Just to mention the keywords “loading above number plate” or “positioning system”. Even if certain position tolerances were permitted in these cases, the result was a considerable loss of performance.

The following objectives, approaches, and characteristics of this research project represent a significant difference and progress compared to the previous approaches:

In summary, it can be concluded that with adaptive compensation the electromagnetic interference emission can be kept low, thus enabling power transmission without precise positioning measures or significantly increasing power transmission while complying with the EMC limits, even if, for example, a vehicle is not parked optimally.

On the one hand, these features enable a high utilization and thus also an economically sensible operation of the planned system; on the other hand, the costs for communication, positioning and shielding measures can be kept low by the planned electronic compensation and control strategies.

Up to now, Finepower has constructed the prototype of an inductive charging system and carried out first comparative measurements with and without adaptive compensation. As shown in Figure 3, the measured degree of efficiency is plotted for different power outputs depending on the positional offset. The measurements examined in this project can increase the efficiency at full charge by approximately 1%, or considerably more as the charge decreases. In the case of extreme offset, these measurements alone allow an appreciable operation. 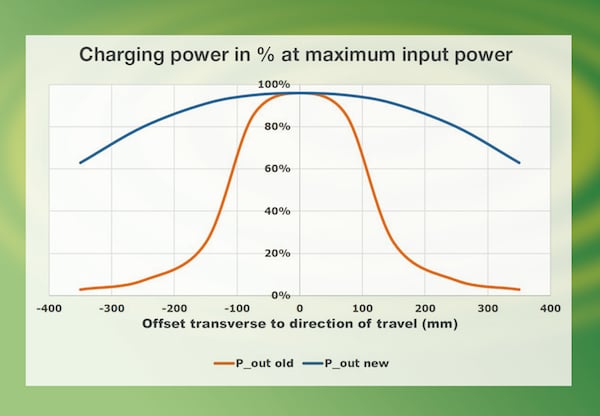 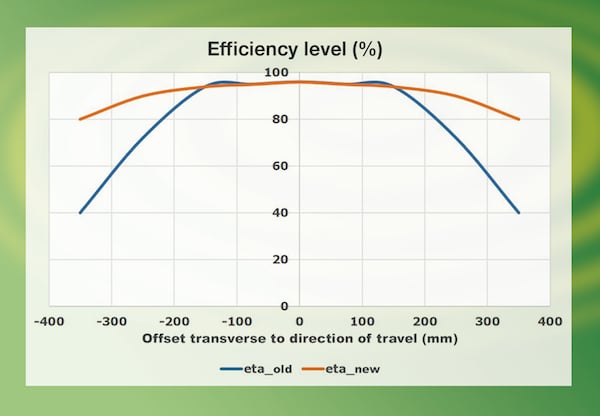 Figure 3. Increase of efficiency in the offset range

Finepower has already confirmed the basic functionality and the technical improvement goals with the help of first measurement results. In the further course of the project, the adaptive compensation and the primary coil design will be revised so that, on the one hand, energy can be transmitted at all even in the event of extreme positional offset and, on the other hand, a further increase in efficiency can be achieved in rated operation.

The concept of universal inductive energy transmission is not limited to the field of automotive or electric mobility, but can also be used for industrial purposes, especially in the production process, for example for contactless charging of commercial vehicles such as forklifts or small transport units.

In the context of industrial areas, it is crucially important to achieve the most efficient, rapid, and straightforward charging of the energy storage devices since electricity consumption essentially determines the operating costs, possibly leading to an increase in manufacturing and sales prices of the respective company's products.

Peter Lutter is a Graduate Engineer in Physics and Semiconductor Electronics at Chemnitz University of Technology. He currently works as the General Manager at Finepower GmbH since January 2002.