Frequency Control in a Power System

Frequency Control in a Power System

Learn about the primary, secondary and tertiary frequency control in a power system.

In order to keep the expected operating conditions and supply energy to all the users (loads) connected, it is important to control these two parameters within predefined limits, to avoid unexpected disturbances that can create problems to the connected loads or even cause the system to fail.

The most commonly used nominal frequency (Fn) in power systems is 50 Hz (Europe and most of Asia) and 60 Hz (North America). The reasons for this choice are based on technical compromises and historical situations.

Generally, when the system operates in a range of frequency Fn±0.1 Hz, it is in the standard conditions, while when the frequency ranges from 47.5 to 51.5 Hz (in 50 Hz network for example), it is called emergency condition or restoration condition. These values can change from country to country.

Frequency variations in a power system occur because of an imbalance between generation and load. When the frequency value of a power system reaches the emergency condition, the control strategy is initiated.

The primary control (or frequency response control) is an automatic function and it is the fastest among the three levels, as its response period is a few seconds.

When an imbalance between generation and load occurs, the frequency of the power system changes.

For example, with a load increase, the generated power doesn’t immediately change, so the energy to compensate for this load increase arrives from the kinetic energy of the rotating generators that start decreasing the velocity (this is called the inertial response). After this moment, the speed controller (called the “governor”) of each generator acts to increase the generation power in order to recover this speed decreasing and try to clear the imbalance.

Generally, in about 30 seconds, each generation unit shall be able to generate the required additional power and then keep it for at least 15 minutes (this timing depends on the requirements of the transmission system operator, or TSO).

All the generation plants connected in the HV power system are called to supply this service, except the renewable energy source (RES) not schedulable (ie. wind, solar, biogas, hydraulic flow water), so, for this reason each generation unit shall have a dedicated and proper “reserve” power in order to accomplish this regulation when active.

The purpose of the primary regulation is to clear the unbalance between generation and loads, in order to take the system to a stable condition. This service is mandatory for all the generators entitled to provide it and not remunerated.

Regarding the not schedulable RES, these generators must be able to work with a defined P(f) function, in order to modulate their power according to the frequency value. This is easier in case of over-frequency, which requires power decrease. However, it could be really complex (almost impossible) in case of under-frequency, which would require a power increase, not always possible (even with a reserve power) due to the volatility of the primary resource itself.

The continuous growth of RES implies the reduction of thermoelectric plants in operation, with consequent difficulties to perform this frequency regulation, for the reasons explained above. There are already different solutions under analysis and some of them already in place in several power systems (battery energy storage systems are one of the most promising). This is one of the main challenges to the massive deployment of RES in the power systems.

Once the primary regulation accomplished its target, the frequency value it’s different from the nominal one, the reserve margins of each generator have been used (or partially used) and also the power exchange between the interconnected power systems is different from the predefined one. So, it’s necessary to restore the nominal value of the frequency, the reserve of each generator previously used, and the power exchange among the power systems. This is the purpose of the secondary control.

In order to perform this task, there are some generators entitled to perform the secondary control, through a dedicated reserve power. This reserve depends on the requirement of each TSO and usually, it’s a percentage of the maximum power available, with a predefined minimum value to guarantee independently from the maximum power of each generator.

The secondary control is usually performed in an automatic way, by all the generators that participate to this regulation, through specific “set-point” sent by a central controller.

Figure 1 shows an example of the first two levels of control after a frequency event in the system. The green line and the red-dashed  line show two different responses according to the inertia level of the system (power systems with low generation produced by rotating machines will have low inertia level). 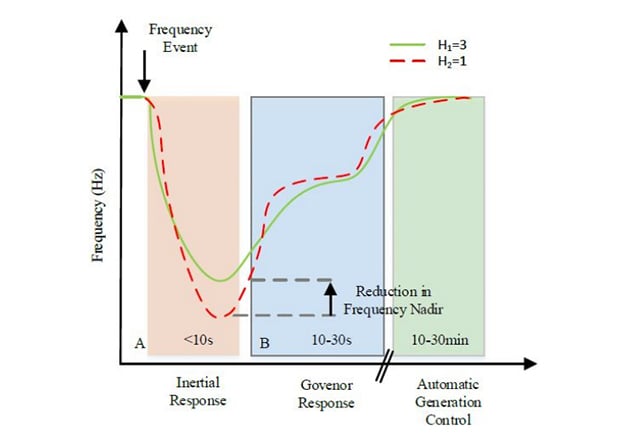 This service is usually remunerated according to the negotiation condition in each energy service market.

After secondary control is completed, the reserve margin used for this control shall be restored too and this is the purpose of the tertiary control (or replacement reserve) the last level of frequency control.

In order to perform this restoring, the TSO calls send single producers (even the ones not involved in the secondary control) the operating prescriptions related to power variation for the generators already in operation and if needed asking start-up generators not operating at that moment.

This control level is not automatic but it’s executed upon request from the grid operator, and its remuneration follows the same rules of the secondary control.

A Review of the Three Regulation Levels

The table below shows a brief summary of the three regulation levels and the main features of each.