Constant improvements in power semiconductor technology enable even more efficient and compact power converters. Silicon Carbide CoolSiC™ MOSFETs can be considered as a new trend in electrical drive applications due to their superior efficiency, especially at partial load [1]. Even fanless designs can be realized resulting in more integrated and reliable converters [2].

However, this trend is accompanied by lower short-circuit robustness of those power devices. CoolSiC™ MOSFETs, for example, are specified for a short circuit pulse duration of 2-3 µs [5]. Such small short-circuit times represent a challenge for typical detection methods.

In industrial drives, the following state-of-the-art methods are common:

Each method has its pros and cons. Gate drivers with “DESAT” function can detect both bridge shoot-through faults as well as faults at the inverter output side. However, the gate driver is more complex and, in case of IGBTs, a blanking time of several µs is needed due to the conductivity modulation induced voltage tail. Shunts feature high bandwidth and linearity but also add power losses. Moreover, while AC shunts require separate digital isolation ICs with special data streams DC shunts cannot detect all ground faults.

This article focuses on a new digitally-based AC current sensor. It features galvanic isolation and fast short-circuit detection which complies with the industrial drives standard IEC 61800-5-1. In this context, phase-to-phase and phase-to-earth faults must be handled. However, it should be noted that, by nature, bridge shootthrough faults cannot be detected by AC current sensors. However, those faults are very rare, and can be caused, for example, by cosmic-ray induced failures of single devices. This kind of protection might only be required for large inverters with long bus bars in order to prevent consequential damage.

Finally, it will be demonstrated that short-circuit detection times below 1 µs are possible. This allows a safe operation of CoolSiC™ MOSFET and more efficient IGBTs.

The TLI4971 is a high-precision miniature coreless magnetic current sensor with analog interface and two fast over-current detection outputs (block diagram in Figure 1). Infineon's well-established and robust monolithic Hall technology enables accurate and highly linear measurement of currents with a full scale up to ±120 A. Nominal currents of 25 A, 50 A, 75 and 120 A are available. All user-programmable parameters such as OCD thresholds, blanking times and output configuration modes are stored in an embedded EEPROM memory. The overcurrent detection threshold can be adjusted between 0.5 and 2.5 times the nominal current. Further, the response time is below 1 µs and can be increased in steps of 500 ns according to the setting of the EEPROM.

Due to its unique package design (Fig. 1), the TLI4971 achieved an outstanding low impedance of 220 µΩ in its integrated current rail and has a parasitic inductance of less than 1 nH, which additionally would enable the use in the DC-link connection of wide bandgap devices

To demonstrate the fast reaction time of the TLI4971 in combination with CoolSiC™ MOSFET, a test up was built up (Figure 2). One half bridge of the FS45MR12W1M1 power module was used and its output terminal was connected to a TLI4971 “MS2GO” evaluation board. For normal operation an inductive load was used in a double pulse test. For short-circuit operation the terminals A and B were connected through a very short cable. 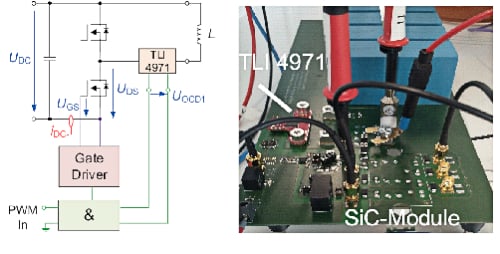 As there are no additional functions necessary on the gate driver level, such as DESAT functionality, a simple and compact 8-pin gate driver (1EDI60N12AF) could be used.

The FS45MR12W1M1 has a nominal current of ID = 25 A. The overcurrent level (OCD1) of the TLI 4971 was set to four times the nominal current, i.e. 100 A to ensure appropriate safety margin. As mentioned before, this level is flexible and can be programmed during the design phase. As the output signal of the OCD1 overcurrent pin and the input pulse signal were connected to an AND logic gate, the gate driver will turn off immediately in case of an overcurrent/ short-circuit event.

At first, normal operation was tested using a short lab cable and an 80 m long motor cable to connect the inductive load. The device current was measured in the DC- path with a 200 MHz Pearson probe (model 2877) and a current transformer [3]. The gate resistors were adjusted so that the dv/dt was limited to 5 kV/µs at worst-case conditions (low current turn-on, high current turn-off). As expected, Figure 3 shows a much higher turn-on current due to the capacitive charging of the motor cable. However, no false triggering of the OCD1 pin was observed. 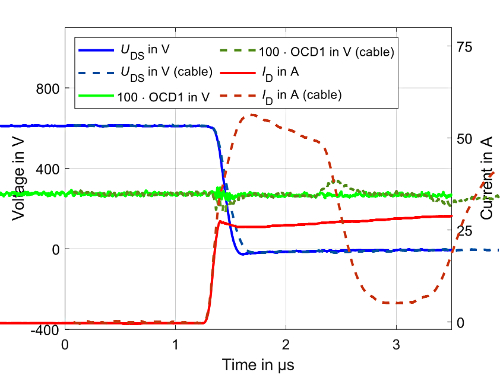 In a second step, the inductive load was removed and the terminals were bypassed. Afterwards a short circuit I (hard switching fault) was provoked. As can be seen in Figure 4, the current is detected and turned off in approx. 950 ns. It should be noted that the OCD1 has a delay of approx. some hundred ns after the overcurrent level of 100 A is exceeded. Since the SiC-MOSFET has no intrinsic current limitation, the current reaches a peak of about 300 A. After this peak, the current would slightly decrease on its own due to the reduction in carrier mobility and JFET effect with temperature increase and self-heating [6]. In this case, turn-off is so fast that this effect is barely visible. The turn-off voltage peak is still moderate and only 50 V above the DC-link voltage, thanks to a low-inductive DC-link path and module layout. 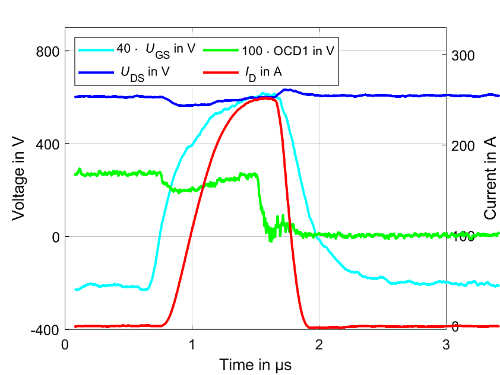 In another short circuit test an 80 m long motor cable was used. As can be seen in Figure 5, the current slope is much slower. The peak current is only slightly above 100 A. 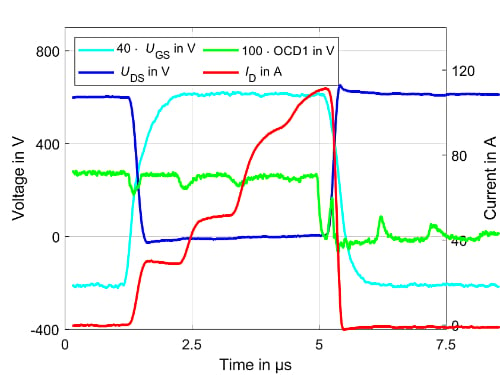 While very fast short circuit protection is mandatory for all SiCMOSFETs in drive applications, modern IGBTs have more moderate short-circuit requirements. TRENCHSTOP™ IGBT7, for instance, allows 8 µs (industrial drives @150°C) and EDT2 IGBTs (automotive drive train) requires 3 µs (@175°C). This raises the question of what could be the benefit for today’s IGBTs using the TLI4971 and its even faster short-circuit protection?

It is well known that by increasing the gate voltage, the saturation voltage decreases as well as power losses. However, as a drawback, this goes along with a short circuit derating as described in [4]. For example, increasing the gate voltage to 18 V, lowers the short-circuit time by 30% to approx. 5.6 µs. The TLI4971 can still handle this short-circuit time competently. Looking at the output characteristic as shown in Figure 5 as an example, it becomes obvious that the benefit is significant especially at higher currents. At twice the nominal current, the saturation voltage decreases by 1.4 V or 37% applying a gate voltage of 19 V. 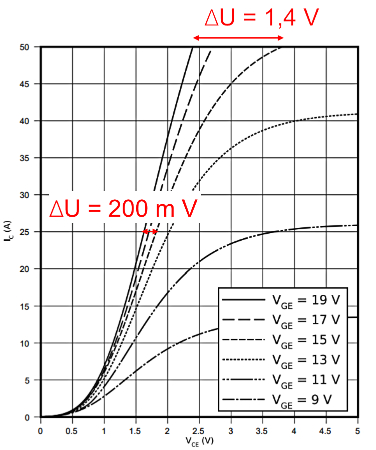 Using the XENSIV™ TLI4971 current sensor from Infineon, it was shown that short-circuit protection of the latest CoolSiC™ MOSFET technology is possible. This simplifies the use of CoolSiC™ MOSFETs in applications such as industrial drives, where a certain robustness against short circuits is required. The use of CoolSiC™ MOSFETs leads to a more efficient drive inverter, which can help to reduce the energy costs over lifetime. In addition, the CoolSiC™ MOSFET enables inverter integration into the motor, which is challenging with state-of-the-art IGBTs. Furthermore, fast short-circuit protec - tion can also help to increase the efficiency of an IGBT-based in - verter by increasing the gate voltage. Hence a lower VCE is obtained for a given current.