This article discusses the benefits of double-sided silver-sintering technology and demonstrate the superiority over conventional solder.

The pressure on reliability requirements for high-power components in smaller packages is increasing as the development of electric and hybrid vehicles is evolving, as has the pressure on manufacturers with the environmental requirements to remove lead from electronics such as the European Union’s Restriction of Hazardous Substances Directive (ROHS).

Some lead-free technologies have been widely investigated [1–3]. Several technologies have been developed over the past decade to produce high-temperature power modules (175 °C and beyond junction temperatures), some without lead, while providing high reliability, such as gold-tin (AuSn) alloys, self-gripping assemblies similar to the gecko’s use of Van der Waals forces, electrically conductive adhesives, transient liquid-phase bonding, tin-antimony alloys, high-lead solder, tin-silver-copper (SAC) systems, and silver sintering.

However, commercializing these technologies has been a complex process. Silver sintering has attracted interest as a promising technology because it fulfills the reliability requirements of electronics devices. Alpha silver-sintering paste and film technologies enable a fast (<2 min), low-pressure (5–10 MPa) die-attach process in a wide range of applications including power modules, power discretes, thyristors, high-power LEDs, and power RF devices. Recently, researchers from Alpha Assembly Solutions, Rogers Germany, Renesas, and Mentor Graphics [4] worked together to evaluate the effects of using double-sided silver sintering as the die- and clip-attach technology on the thermo-mechanical performances of power modules (IGBTs).

Double-sided silver sintering enables further miniaturization and significantly reduces parasitic-inductance–related losses. It also improves the thermal management of power modules because heat dissipation is possible from both sides of the die. The researchers conducted an internal simulation study which demonstrated that IGBT junction temperature decreased approximately 33% when silver sintering is used as the die-attach material instead of conventional solders (Figure 1).

They evaluated the effects of Si3N4 AMB substrates with three different metallization: raw copper, spot silver, and full electroless silver when exposed to thermal shock and power cycling. They used thermal impedance measurements throughout power and thermal cycling tests to characterize the thermomechanical behavior of the sintered modules. Metallographic and scanning acoustic microscopy (CSAM) analysis were used to correlate failures to a defect inside the assembly. 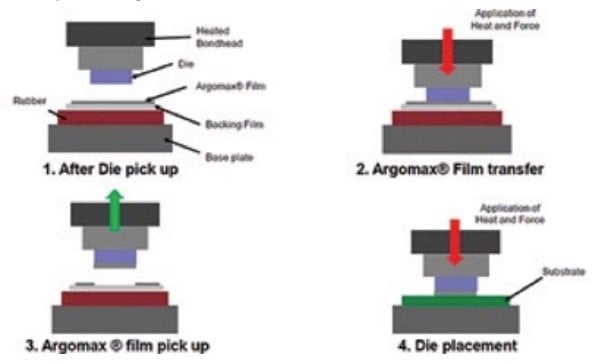 The silver film technology from Alpha Assembly Solutions (Argomax® 8020) was used for the die-attach process on electroless silver and spot silver finish substrates; whereas, another film from Alpha that is specifically developed for copper finishes (Argomax® 8050) was used for attachment on the raw copper substrates. Copper clips also were attached to the die and substrates using the film. The clip replaced the wire bond that is usually used as the connection to the Mentor Graphics MicReD 1500A Power Tester electrical interface for power cycling and thermal impedance measurements (Figure 3).

Nine modules were used for power cycling tests, nine for thermal shock tests, and the remaining one for baseline metallographic analysis. One of the modules used in power and thermal cycling tests was analyzed optically for any failure occurring in the assembly. CSAM analysis was completed on all sintered modules to detect delamination throughout the tests.

The Power Tester measured the variation in VCE (voltage between collector and emitter of the IGBT) during each relaxation period (cooling period), and calculated the variation in the thermal resistance to help indicate if the die- or clip-attach interfaces of the assembly were failing. The devices were continually subjected to 200 A for 5 s and then to 10 s relaxation (causing a delta TJ = 100 °C). The double-sided sintered modules were placed on the cooling sink with a thermal grease (G751 from ShinEtsu Group), filled with silver particles to improve the thermal path. A torque wrench and consistent application of thermal grease was used to ensure that the same pressure was placed on all modules to the cooler sink.

The cooling liquid was kept at 30 °C at all-times throughout the tests. When carrying 200 A, the maximum junction temperature was 130 °C with little variation in function of the finish observed temperature. Junction temperature reached 125.5 °C for the raw copper substrates. Three soldered pieces with wire bonding used as the electrical connection for the top face were also cycled under the same conditions to create a comparison baseline.

Thermal impedance measurements were taken throughout the experiment because thermo-mechanical failures in power modules are typically caused by cracks between the attachment interfaces. Coefficient of thermal expansion (CTE) mismatches between the different layers of a power module contributes to the expansion and shrinkage phenomena created during thermal variations (Table 1); especially between the substrates materials and the dies (silicon), as well as the die-attach layer.

Thermal dissipation performance in a power module becomes compromised when the ratio of cracking becomes too high in the module layers. Therefore, thermal impedance measurements, taken throughout power cycling, are used to find the failure in power modules.

The researchers conducted continuous measurements throughout the power cycling tests with the same equipment. An increase of 15% of the thermal resistance or maximum delta T °C or on the VCE (voltage between collector and emitter) of the module was defined as the failure criteria. Optical analysis using CSAM and metallographic analysis were conducted after initial processing the parts (time, t = 0) and at the end of the power cycling tests to correlate any failure to the sintered modules.

Nine sintered modules were submitted to liquid-to-liquid thermal cycling (three for each substrate metallization). The tests were conducted for 1,000 cycles between -55 °C and +165 °C with a 3-min dwell time. Liquid-to-liquid equipment was used to ensure fast transition between the extreme temperatures. The thermal impedance variations for all tested sintered modules were below the failure criteria, which was a 15% increase from the initial measurements (Table 2). This result illustrated the encouraging properties of sintered modules (Figure 4).

Table 2: Average thermal impedance variation throughout thermal cycling for the three types of substrates metallization; three modules were tested for each substrates configuration. 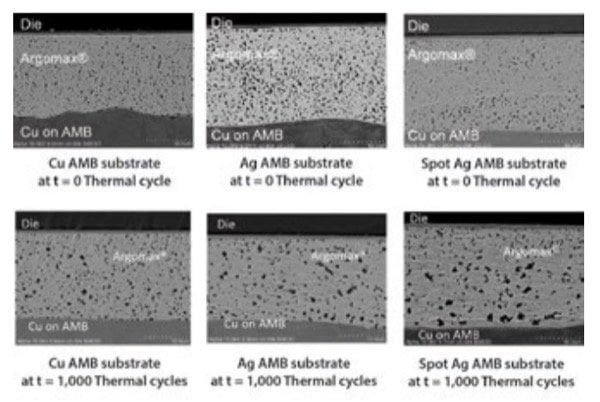 Metallographic analysis was conducted on two sintered modules for each substrate metallization: one at t = 0 cycle and one at t = 1,000 cycles. The cross-sections were taken on one edge and in the middle of each module. The sintered-silver layer exhibited an average density of 90% for all three substrate metallization types. The sintered modules presented well-formed bonds between the die and sintered silver layer as well as between the substrates and sintered-silver layer.

As depicted in the microscope pictures, no defect was found on all of the sintered modules. The absence of defect was expected because of the intermediate test results for thermal shock. The sintered layers and interfaces with the die and substrates did not exhibit any structural modifications throughout the thermal cycling test.

Nine sintered modules, three for each substrate metallization, were also subjected to power cycling using the Power Tester. It was agreed that the tests were to end when the failure criteria of 15% increase of the thermal impedance, maximum change in T °C or VCE, was reached for each module. After 65,000 cycles (200 A, 5 s on and 10 s off, ΔT= 100 °C), none of the nine sintered modules presented an increase of 15% of the thermal impedance (Table 3). In a further study, some pieces were pushed till 220,000 cycles without failure.

Nevertheless, the power cycling tests were stopped to proceed with the CSAM and metallographic analysis. Analysis of the aged sintered modules did not reveal any defect (delamination or cracks) inside the assemblies (Figure 5). The low thermal impedance of the silver layer creates a better thermal path inside the assembly and reduces the overall thermomechanical stress. The improved thermal performance of the sintered module permits a reduction of the maximum junction temperature to 130 °C subjected to 200 A current. 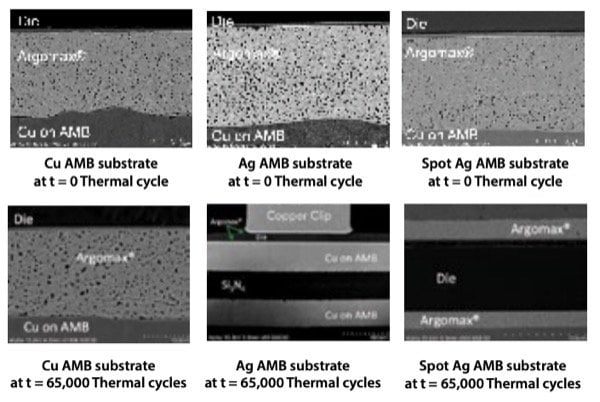 For solder, the junction temperature reached 172.6 °C because of the high thermal impedance of the solder layer (SnAgCu). Soldered power modules failed at 45,600 cycles because of cracking on the die attach that caused the wire bond to lift off.

The results of this experiment showed that double-sided silver-sintering technology demonstrates superior thermo-mechanical performance compared to conventional solder. The power module that was double-sided silver-sintered increased the performance of the assembly because of the well-suited mechical properties of the sinter silver layer, the high thermal conductivity of the silver layer, and the subsequent heat path (top and bottom side of the die) that was created to extract the heat from the semiconductor. The sintered modules did not exhibit any defect after thermal cycling (1,000 cycles, liquid-to-liquid, 3 minutes dwell, and -55 °C/+165 °C) and power cycling (65,000 cycles, 200 A, 5 s on and 10 s off).

The CSAM and metallographic analysis confirmed the thermal impedance measurements done throughout the cycling tests. The failure criteria was not met for all tested sintered modules; whereas, soldered samples failed at 45,000 cycles. In a further study, some of the sintered modules were pushed to 220,000 cycles without defect on the sintered interfaces.

The use of this film technology for silver sintering enables lower junction temperature and increases reliability for automotive power modules applications. The lower thermal impedance and junction temperature of the sintered assembly when compared to using solder offers the possibility to operate semiconductors at a higher current level, while aiming for package shrinkage or/ and enhanced reliability.

Gustavo Greca works as the Global Electronics Packaging Applications manager at MacDermid Alpha Electronics Solutions (Alpha Assembly Solutions) where he is the key account manager for leading electric cars and semiconductors companies. He is responsible for the global synchronization for best practices on die attach applications. He is particularly skilled in the field of electronics, manufacturing and automotive. He earned his Bachelor's Degree in Electrical Engineering at the Federal University of Parana located in Curitiba, Brazil. He also holds a Master's Degree in Electronics Manufacturing Engineering at the University of Bordeaux - Talence Campus located in France.

Dr. François Le Henaf works as the Process Engineer and Development Center Manager at MacDermid Alpha Electronics Solutions (Alpha Assembly Solutions). He is responsible for the European activities and also for providing technical and application support for customers in Europe. He is particularly skilled in the field of product development and management as well as six-sigma. He has achieved 10 publications and have finished 2 projects throughout his career. He earned his Master's Degree in Materials Science at the University of Limoges (ENSIL). He also holds a Ph.D. in Electrical and Electronics Engineering at the University of Bordeaux- Talence Campus as well.

John Parry works as the Senior Industry Marketing Manager for Electronics at Mentor Graphic's Mechanical Analysis Divison. Where he is responsible for marketing the division's thermal characterization hardware and software products in the electronics industry and electronics cooling operations in other industries. He earned his Bachelor's Degree in Chemical Engineering at the University of Leeds. He also holds a PhD in Chemical Reaction Kinetics and Reacter Design at the University of Birmingham.