Two or double testing is a key implement in the toolbox of power electronics engineers that enables comprehensive and accurate measurements to be made early in the design cycle, reducing time to market.

Testing the switching performance of power semiconductors in a safe and controlled environment is a challenge. Unforeseen problems that will come up during the project. Now the famous bard once wrote, “many a true word hath been spoken in jest” (1), and the reality is that unforeseen technical issues can put any project months or even years behind schedule. This is especially true if these occur late in a project.

The earlier in any project technical issues can be identified the less impact they will have on the overall project timeline. So what has this to do with Double Pulse Testing (DPT)? Amongst the many benefits of DPT, the most valuable is the ability to test a power stack under worst-case corner operating conditions early in the design cycle and so reduce the risk of unforeseen problems popping up later in the program timeline.

A DPT is a tool that enables a power switch to be turned ON and OFF at different current levels as shown in figure 1. By adjusting the switching times T1, T2, and T3 the turn ON and turn OFF waveforms of the Device Under Test (DUT) can be controlled and measured over the full range of operating conditions. Figure 2 shows a typical circuit diagram for a DPT experimental setup. Here the DUT, which is a SiC MOSFET, device 2 the lower-left device in the “H” bridge, is instrumented so that the source current, drain to source voltage, and gate to source voltage can all be measured while the device is switched. The switching times T1, T2, T3, and hence, currents can be adjusted using a programmable pulse generator. The complementary SiC MOSFET, device 1, is also switched for synchronous rectification operation. A load inductor limits the rate of di/dt. The key considerations for the selection of this inductor include: The DC bus voltage level can be adjusted using a variable DC supply. Some frequently asked questions are:

Why the second pulse? It is important to build up current in the complementary device or diode so that when the switch turns on, the effects of any reverse recovery current can be evaluated.

Why is the configuration an H bridge as shown in Figure 2? Can a single half-bridge be used with the load inductor connected to either DC + or DC -? An H bridge is shown in Figure 2 as in many applications the load is switched between two half-bridges and so this topology is a representative implementation of the final system. However, a single half-bridge topology with the load inductor connected to either DC bus rail is simpler and will provide accurate results for most operating conditions. It is recommended that the full H bridge be used when testing modules in hard parallel. This H bridge can also be useful for evaluation of device performance under phase-to-phase short circuit conditions or under short circuit type 2 events depending on the customer application requirements.

Can this be used to test a three-level topology? Yes. This is shown in more detail later in this article.

It is hard to over-emphasize the importance of safety when performing a DPT: high voltages can be lethal. Safety is critical during double pulse testing. Lethal voltages are often present and when components fail, the results can be dramatic and lead to the ejection of hot materials. For this reason, it is strongly recommended that the high voltage portion of the test setup be enclosed inside a protective cover (figure 3). This barrier can work both directions, keeping unwanted materials out, for example, a hand or cup of coffee, and keeping unwanted materials in, such as electrolyte from a failed capacitor. Figure 3: Example of a DPT enclosure

An additional layer of security can be added for the “distracted” operator by having a warning light when high voltage is present and an interlock on any access door, which, when opened will immediately cut power and discharge any high voltage capacitors.

Following are some suggested rules to be taken under serious consideration:

It is good to use the ”buddy” principle in the event of an incident so someone is available to provide cardiopulmonary resuscitation and call for emergency aid. Finally, if high-temperature chip switching tests are being performed, components surfaces can be at temperatures >50 °C and so cause burns. Caution is required. To measure the DUT voltages as shown in Figure 2, it is possible to use single-ended probes. Figures 4 and 5 show some techniques to reduce loop inductance and coupling in the measurement path and how some turns around a ferrite core can add common mode impedance to the measurement signal. To measure voltages at nonground reference potentials, differential probes are required and should be selected with a high common-mode rejection ratio, as the DUT can be moving at very high dv/dt levels with respect to the scope ground. Ensure that all voltage probes have the required voltage rating. 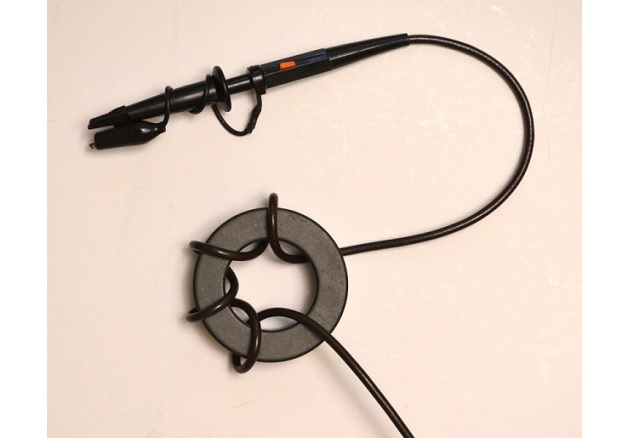 To measure the actual device switching current, a current sensor must be inserted into the collector/emitter or source/drain of the DUT. This can be a challenge as accuracy is required but it is important not to add a large amount of loop inductance which would distort any results. Typical methods include; but, are not limited to: Figure 6: Rogowski coil fitted around the terminal of a 62 mm module

Pearson current sensors (2): These have very high bandwidth and accuracy. However, they have the disadvantage of being large, so making it difficult to insert into the power circuit without increasing the loop inductance. They also have a metal case that can make it problematic to isolate from live bus bars etc. 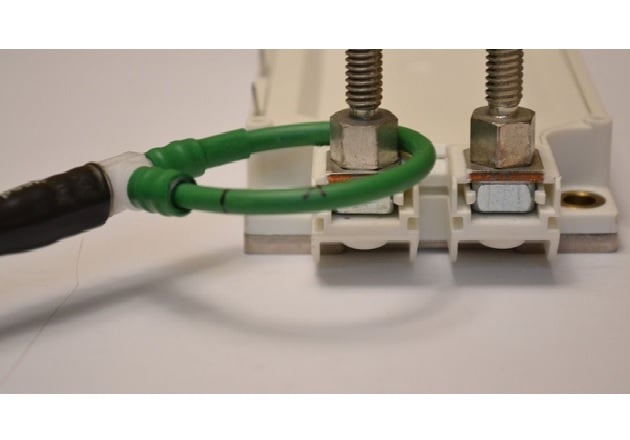 Figure 7: Rogowski coil fitted around a standoff fitted into the terminal of an EconoDUAL™ 3 module

Rogowski coils (3): These have a bandwidth of between 15-30 Mhz which is enough for many applications and any delay skew can be compensated for with an oscilloscope. They have the advantage of being flexible and so are easy to insert into the power circuit. Figures 6, 7, and 8 show them used on a 62 mm, EconoDUAL™ 3 with small standoffs and a PrimePACK™ module. In case it is needed, do not be afraid to cut a little plastic to help to get the coil to fit. Some high power modules have more than one screw connection for the collector or emitter current and in this case, more than one probe might be required. Figure 9 shows how a coil can be used on a PCB based design with a loop around a current-carrying trace. This method requires that the PCB designed with this end in mind. 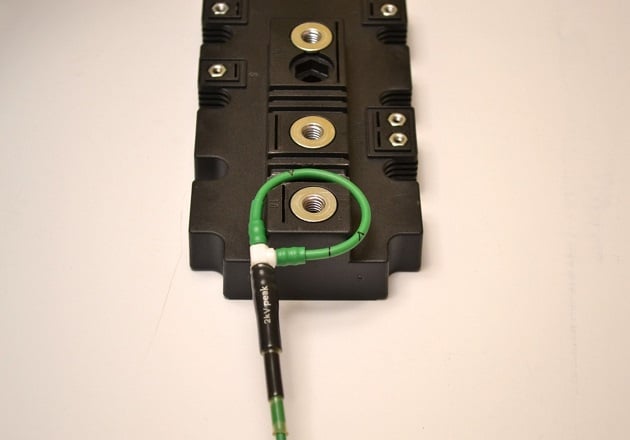 Figure 8: Rogowski coil fitted around the terminal of a PrimePACK™ 2 module

Figure 10 shows a typical Pearson and Rogowski current sensor. Current shunts can be used especially on low current devices where they can be fitted into a circuit without significantly increasing the loop inductance. What testing should be included in a DPT It has been shown how the DUT can be switched at different voltages and currents. A third key parameter that affects the switching characteristics of a power semiconductor is temperature. This can be adjusted by mounting the DUT on a plate, which can be heated or cooled. For testing at temperatures lower than 0°C, which can be achieved with a chill plate and freezing water, the test setup can be installed inside an environmental chamber and the temperature reduced to -20°C or -40°C as the application dictates. Figure 10: An example of a Pearson (abpve) and Rogowski coil (below) current sensor With this set of three variables, the DUT can be operated at the key corner operating points, for example, maximum bus voltage, maximum current but low operating temperature. This combination can produce the highest voltage overshoot during turn off, and so is critical to ensuring the DUT remains within its RBSOA. It is recommended to measure both the active switch and any complementary diode under this range of operating conditions.

Apart from corner conditions, several other tests should be considered.

The Benefits of Testing

Waveforms and test results can be stored as reference waveforms and if changes are required later in the design or during production these can be used as templates to evaluate the effect of any design modifications.

Accurate measurement of switching losses is critical for the estimation of the device junction temperature under worst-case operating conditions.

Having a standard test plan and setup helps all power converter designs to share a common qualification process.

As stated in the introduction, running these tests early in the design cycle and being able to solve any issues that arise can help keep any project on track.

It must be noted that DPT can cover most of a power semiconductor operating conditions, but it cannot fully emulate the operation of a full converter. Issues like noise pick up on control lines, software bugs, and effects of magnetic fields, all of which can affect the reliable operation of the power switches, will not be identified with this test. DPT does take time and design effort. However, this effort will provide a payback in terms of safety, accuracy, product reliability, and project timelines.

David Levett works as a power electronics design and application engineer at Infineon. He received his Doctor of Philosophy (Ph.D.) in Electrical Engineering Motor Drives at the University of Southampton.

Ziqing Zheng received her Master's Degree in Power Electronics & Electric Drives at Shanghai Maritime University. She works as an application engineer at Infineon