Take a deep dive into the workings of various drives as part of the power transmission process.

People around the world use bicycles either to commute or exercise. But have you ever wondered how the simple action of pedaling makes the wheels spin and cover distances? When you pedal, the axle and other components like gears, chains, etc., accumulate the force, and the wheels connected help you cover the distance. Long story short, this simple two-wheeled machine uses momentum, force, and friction, and converts energy created by the riders’ bodies into kinetic energy to get them to their destinations.

This is one of the simplest examples of the power transmission process in our daily lives.

Industries worldwide including energy, construction, food and beverage, agriculture, and others are heavily dependent upon the mechanization and automation of their processes and operations.

What powers these processes across the production lines is this power transmission mechanism. All machines require a source of power, be it an electric motor or a gasoline engine, or something similar. The end-users of this power are the moving parts of the machine, and the power has to be transmitted by several means including gears, chains, belts, pulleys, and more, each having its own style of transmitting power.

Diving deep into the workings of every individual drive helps us understand how things work. Let’s take a look.

The primary purpose of belt drives is to transmit power from one shaft to another with the help of a thin inextensible band that runs over two pulleys. These pulleys can rotate at the same or different speeds. The mechanical power or rotary motion is transmitted from the driving pulley to the driven pulley. 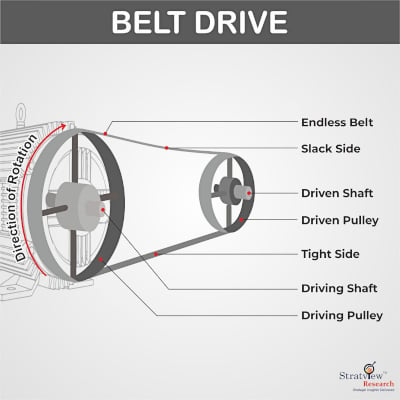 Belt drives are useful in inspection for damage or wear. They absorb shocks and vibrations and safeguard rotating machinery from overload fluctuations. It requires fewer adjustments and is quieter, cleaner, and runs smoothly. They are easy to install; have a range of speed options; lowered power loss; and are less expensive.

Belts were initially made of leather, but by the mid-nineteenth century, manufacturers also used belts made of cotton, hemp, and wire. Power transmission via leather belts has remained popular for many years. Leather belts were the state-of-the-art solution for efficient power transfer even at the turn of the 20th Century. The industrial power transmission belts today are made up of materials such as rubber, polyester, polyamide, and other synthetic materials.

Today, most industries like energy, construction materials, food and beverage, warehouse and distribution, and agriculture use power transmission belts in their operations.

The annual sales of power transmission belts were valued at $2.8 billion in 2022, according to Stratview Research. This figure is likely to reach $3.7 billion by 2027.

Among the above industries, agriculture is the largest user of power transmission belts, as it requires efficient and reliable production at a lower production cost.

A chain drive helps transmit mechanical power (rotational motion) in machines. A chain drive, as the name implies, is made up of a series of pin-jointed links covered by an endless chain wrapped around two or more sprockets. The holes in the chain links fit over the sprocket teeth. The chain wrapped around the shaft's sprocket revolves with the main mover, transferring mechanical power to the driven shaft by applying mechanical force to it. 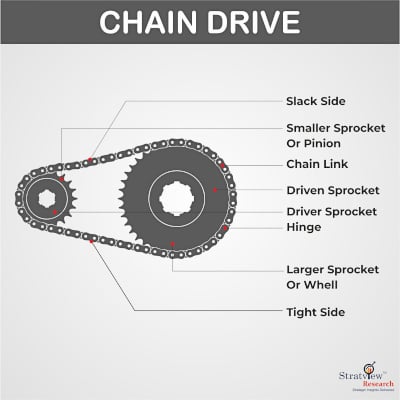 Chains are most commonly employed in the power transmission systems in the industry, with annual sales amounting to more than double the value of belts. According to Stratview Research, the market size of industrial power transmission chains worldwide was approximately $6.0 billion in 2021.

Among different types such as roller chains, silent chains, leaf chains, flat-top chains, and engineering steel chains, roller chains are the most widely used (~80%) in the industry.

What Makes Chains an Industry Favorite?

Chains are usually manufactured using stainless steel, but can also be manufactured using either special polymers or materials such as titanium or nickel-plated alloys, etc. These chains are available in different sizes, lengths, and materials, enabling them to be used in almost every application and operating condition.

Gear drive technology is used when you need to transmit considerable power over a short distance with a steady velocity ratio. The mechanism of gear drives is simple–the teeth are cut on the blanks of the gear wheel and mesh with one another to transmit altered torque and rotation. 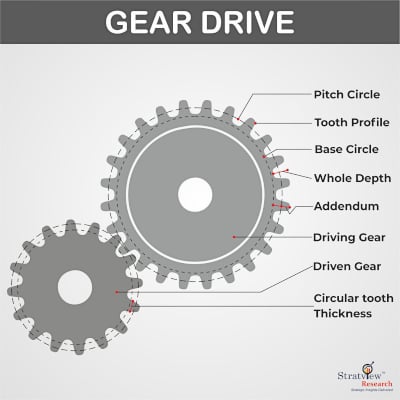 The share of gears as a means of power transmission in industrial usage is the least due to its limitations like suitability for short distances, high cost, and complex manufacturing.

Which is the best power transmission technology? Well, it is quite difficult to select one over another as these drives come with their own sets of pros and cons.

The Advantages and Disadvantages of Drives

Let’s see how each technology differs.

A Comparison of Drives

The onset of the COVID-19 pandemic put the world economy in a reverse. The global real GDP declined 3.4% in 2020, according to the World Bank. The industry value added (including construction) registered a decline of 2.5% in 2020 to be valued at $22.04 trillion.

Consequently, the market for industrial power transmission also suffered a considerable fall of more than 7.0% in tandem with the industrial growth stated above. Companies suffered significant losses as a result of the entire lockdown paired with a temporary shutdown of manufacturing plants.

But with advances in vaccine rollout and increasing awareness, the industries have started operating their machines almost at pre-pandemic levels.

Still, the world is witnessing different levels of surges and adjacent restrictions in different parts of the world, such as the Omicron variant in China. The world seems to have accepted the co-existence of the virus now.

However, the recent heated global environment with the ongoing Russia-Ukraine War has again put the world economy in a risky state. The world has started facing repercussions in terms of rising inflation and low growth because of supply chain bottlenecks due to various sanctions on Russia and rising oil prices.

What’s Next for Power Transmission?

The western world including the US and European Union, and the NATO alliance, is facing the music of the Russia-Ukraine war. The looming energy crisis and challenges in the supply chain have hit the whole world adversely. The world is in the midst of stagflation.

The Asian manufacturing powerhouses, China and India, have kept a safe distance from this situation, and are eyeing to fill the supply chain voids created by this war. Both the countries are estimated to have a strong GDP growth in 2022.

Asia-Pacific accounts for nearly 45% of the global industry value added (including construction) with China catering to more than half of this share. Asia-Pacific is also anticipated to grow at the highest rate of 4.6% during the next five years, almost double the growth rates of North America and Europe.

The world is facing uncertain times where there may be some drastic changes and adjustments in global supply chains. High-growth regions such as China and India will undoubtedly act as the driver pulleys, which will keep the global industrial power transmission market rolling.