This article discusses the functions and applications of Bi-directional Bipolar Junction Transistor (B-TRAN), a new topology for power semiconductors.

The Bi-directional Bipolar Junction Transistor (B-TRAN) is a new topology for power semiconductors, having a vertically symmetric, three-layer, four-terminal structure which allows unique methods of operation, including in either direction with very low on-state voltage drop at high current density.

2-D simulations show 650 V B-TRANs with a Vce of 0.2 V, a current gain of 15, at a current density of 200 A/cm2. The latter represents a specific on-resistance of only 1 m-ohm-cm2. Turn-off losses are predicted to be about 1/10th of equivalent voltage IGBTs. To produce this thin, double-sided device in silicon without intra-wafer bonding, conventional surface processing of standard thickness wafers is combined with temporarily bonded “handle” wafers.

The B-TRAN device structure is shown, along with its various operating modes, in Figure 1. The preferred polarity is NPN. Minority carrier lifetime is more than 1,000 uS (no lifetime killing is used), resulting in a very low leakage current. Similar to an IGBT, and quite unlike a conventional bipolar transistor, it has thin surface diffusions to form an emitter and a collector and a wide base in which the depletion region develops in the off state. Which side is the emitter and which the collector is determined only by the applied voltage or current polarity.

Each side of the device has external contacts to the base region, which allows bypassing of the emitter/base and/or collector/base junctions under external control. This, in turn, allows the device to be operated in various modes, some of which emulate existing devices (Diode, MOSFET, or IGBT), and some of which are unique to the B-TRAN (“transistor on”, “pre-turn-off”).

In this mode, the device is a reverse-biased diode, with the c-base open and the e-base shorted to the emitter. In current B-TRAN designs the c-base voltage is about 40 V below the collector voltage at device breakdown, so the external MOSFETs which control the base connection are rated to 40 V, which allows those MOSFETs to be very small, low cost, and very low resistance. Shorting the e-base to the emitter is required since otherwise, the high gain of the device would cause a low breakdown voltage. A passive e-base clamping circuit may be used to perform this function in the absence of base control power.

In this mode, the c-base is shorted to the collector, the e-base is open, and the device operates as a diode, or equivalently, as an IGBT. However, since the B-TRAN has a high gain, most of the current through the device flows through the collector rather than the c-base. The device may enter this mode from the Off mode simply by reversing the voltage on the device. Vce is nominally 0.9 V even at high current density.

This mode is entered from Diode-on by disconnecting c-base from the collector, and attaching it to a low power voltage source of nominally 0.65 V. This instantaneously drops Vce from about 0.9 V to as low as 0.15 V (0.2 V nominally). Vce of less than 0.1 V can be achieved, but the gain starts dropping off below a Vce of about 0.17 V (at 25C).

This mode reduces the charge carrier density by two orders of magnitude to prepare the device for full turn-off, but takes less than 0.5 uS to complete. E-base is first shorted to the emitter for nominally 400 nS, followed by attaching e-base to a voltage of about 5 V below the emitter for another 100 nS and during full turn-off. 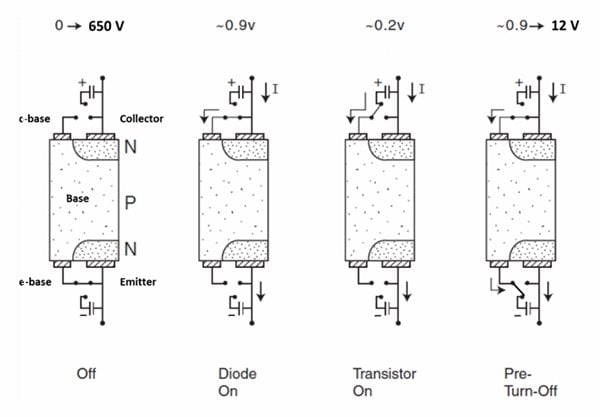 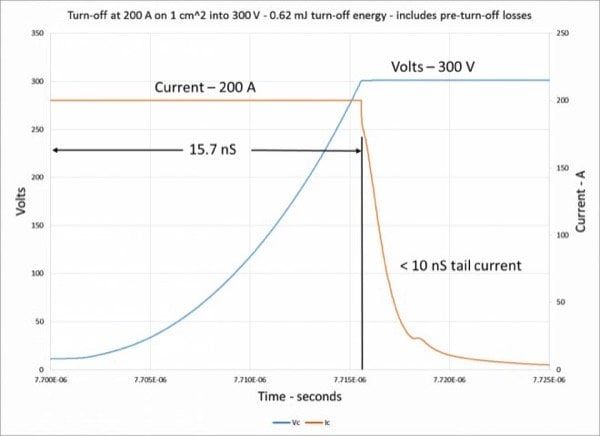 Figure 3 shows a basic 600 A, 300 V B-TRAN based DC to three-phase bi-directional converter as may be used on EV drives. This may be compared with a conventional IGBT/Diode module from Bosch (MH6560C). The conduction loss for the B-TRAN includes base drive power. As shown in Table 1, the die area for the Bosch module is estimated at 12 cm2 based on the package size. The B-TRAN is operated (in simulations) at 200 A/cm2 current density and a gain of 15. This analysis suggests that the B-TRAN requires just 1/4th the die area, and has about 1/5th the losses of the conventional module.

* Datasheet number – but may not include commutating device turn-on loss while diode still has forward current. B-TRAN losses include that loss. Total B-TRAN reverse recovery loss must be less than module since B-TRAN has lower peak reverse recovery current

The AC switch characteristic of the BTRAN is well suited for Ideal Power’s Power Packet Switching Architecture (Figure 4). Full power conversion efficiency with BTRANs is anticipated to be better than 99.4%, resulting in compact, air-cooled, low-cost converters for renewable energy power generation in wind turbines, solar PV power plants, and such plants combined with battery storage. Although often confused with resonant link converters, the PPSA converter is not a resonant link converter, as can be seen from the PPSA circuit animation on the Ideal Power web site.

The BTRAN topology is a simple, yet radically different topology for power semiconductors. As shown in simulations, it combines the fast, low loss switching of a MOSFET, the high current density of the IGBT, the low forward voltage drop of the BJT, and a unique bi-directionality. B-TRANs offer the potential to improve efficiency and system economics of a wide variety of power converter applications including Variable Frequency (VFD) motor drives, electrified vehicle traction drives, PV inverters and wind converters.

Bill Alexander is the developer of Ideal Power's breakthrough current-modulation power converter technology. He is a prolific inventor with over 25 granted U.S. patents. He has previous startup experience and leads the Company's product development efforts. Bill received B.S. and M.S. Mechanical Engineering degrees from The University of Texas at Austin.