Accelerating the Adoption of SiC Power

Accelerating the Adoption of SiC Power

The market has heard for many years about wide-bandgap product roadmaps and concepts, touting that many possibilities could be available. However, you can’t design in a PowerPoint presentation or a preliminary datasheet, so this article will reinforce that Wolfspeed SiC power has moved way beyond any hype, talk, and fake news and has pioneered the widespread adoption of silicon carbide power devices in the customer base today.

We showcase SiC devices that are widely used, and how they solve real issues: system-level examples adopted and working in the market. The practical, real, and ready-to-use circuit solutions discussed will span watts to hundreds of kW. Each solution will highlight our commercially available, fully qualified SiC devices, proven within the market to enable significant value to systems with regards to efficiency, power density, and cost.

SiC is not in the future tense, it’s not just tomorrow’s possibility – with Wolfspeed SiC is all around, proven and here today.

The advantage of SiC diodes in traditional server power PFC boost circuits are well known and understood with full market adoption for many years. Recently though, akin to the increased pressure to achieve new higher efficiency energy star and 80+ power supply regulations, power supply designers are faced with yet more challenges to increase system efficiency & increase power density whilst working with ever reducing BOM budgets.

The circuit function in debate during this article is the AC-DC boost, also known as the PFC. An incumbent design approach would contain the bridge rectifier, single switch or interleaved boost circuit followed by an isolated dc-dc stage.

Higher efficiency power regulation in server systems is a very well know requirement as server farms are functioning 24/7 and are subject to energy regulations and legislation. The 80+ standard is a voluntary certification program intended to promote efficient energy use in computer power supply units.

Despite being voluntary it is widely adopted and industry-accepted. The 80+ standard comes now in 6 levels of efficiency achievement from 80+ as the basic to 80+ Titanium – being the most stringent.

Achieving this PFC efficiency budget with conventional silicon boost topologies is beyond reach with most silicon MOSFET devices and, although achievable, with enhanced performance devices the cost budget increases to such a level that it becomes impractical to implement.

So, the design challenge is how to achieve the required Titanium efficiency budget whilst increasing power density and maintain a cost-neutral power system to typical lower performance silicon approaches.

2kW was chosen as typically the higher power systems require higher efficiency standards. In addition, as increasing, circuit power density is also a strong consideration, a surface mount power device adoption was taken as part of the design challenge. 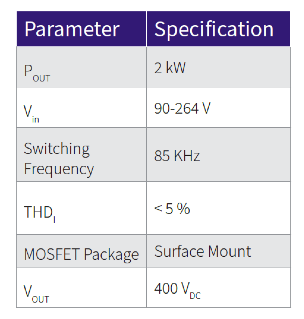 Bridgeless Power Factor Correction (PFC) topologies are not necessarily new concepts, whether single or 3-phase in approach, and the advantages of higher efficiency, higher power density and lower component count are compelling; however often the inadequate performance of the silicon incumbent technology for power switch combined with unusual control implementation has limited any practical adoption.

Now, with a business as usual approach a designer would construct a 4-switch totem pole circuit based off the simulation results with the best performing SiC MOSFET’s available, however with the price neutral budget criteria also in place it was evaluated to approach the totem pole with two SiC MOSFETs in the high-frequency leg and two low Vf silicon diodes in the low-frequency leg to significantly reduce the BOM cost.

This approach significantly reduces the semiconductor content and cost-plus also significantly simplifies the circuit control and associated IC costs. The C3M0065090J was chosen specifically for its surface-mount capability – hence reducing overall board size thus increasing circuit power density plus the fact that the device offers the user a separate Kelvin source connection which when utilized correctly significantly reduces device switching loss versus conventional D2PAK or 3-lead TO type devices.

Operating at 85kHz, the two-switch totem pole PFC circuit designed to the specification shown in Figure 2 achieved exemplary results. At 230V input the totem pole 50% load efficiency was 98.61% and the full load efficiency was 98.54%, both of which were above the target efficiency budgets of 98.5% and 95% respectively. This efficiency includes the losses generated from the auxiliary power supply and fan. Figure 3 shows the hardware board.

Board size is 213mm x 112mm showcasing the totem pole power density. Single fan and surface mount MOSFETs and Diodes. This board is equal to or smaller than existing off the shelf silicon-based 80+ gold solutions but achieves titanium level efficiency. The two-switch circuit is practical to implement and therefore commercialize. The entire design is based on power devices that are fully released, fully qualified and manufactured in substantial volumes. 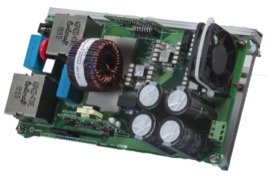 Figure 3: Hardware board and entire efficiency plot against output power

Grid-connected three-phase AC/DC (or DC/AC) power conversion is required in a wide range of industrial applications – from power electronic interfaces of renewable energy systems (solar, wind, and batteries), industrial and mass transport vehicle charging, to regenerative motor drives (elevators, mills, etc.). A practical example of such a 3-phase grid-tied AC-DC system would be fast-charging stations for electric vehicles. Figure 1 shows a functional block diagram of a 3-phase fast off-board charger for battery electric vehicles (BEVs). With Bidirectional functionality of the converter, it is possible to deliver power from vehicle to grid (V2G).

Alternative approach designers today, utilizing SiC MOSFETs, are drastically reducing switching losses and significantly extending the usable switching frequency range of the two-level six-switch converter, while maintaining higher full-load and part-load efficiency. With SiC MOSFETs, the power density of the system is significantly increased by shrinking the size of magnetic components and reducing the size of the heatsink. Additionally, when utilizing SiC MOSFETs, the device’s body diode can be used as the anti-parallel diode, reducing circuit complexity and cost.

Figure 5 shows the two-level SiC MOSFET converter power stage. This example showcases a cost-effective, highly efficient design alternative for an industrial PFC application with the entire design based on SiC power MOSFET devices that are fully-qualified, and in volume production. Challenging the traditional 1200V Si-IGBT two-level system, this approach meets the same system-level specifications but offers higher efficiency, a significant increase in power density, and a reduction in system cost. For this power level, the 1000V/65mΩ SiC MOSFET was selected.

It is without question that electric vehicles provide one of the largest opportunities for power semiconductors for the next decade and beyond and whilst silicon has proved itself to be adequate in the early Hybrids and BEV’s, the power conversion circuits that charge the vehicle's battery and drive the vehicles motor need significant improvements in relation to efficiency and power density to meet the market demands of increasing mileage range, lighter vehicles, and cost-effective end products.

The automotive industry itself has evaluated and proven the value of incorporating SiC into On-Board Chargers (OBC) and drivetrain inverters. It is an incredible result to see that replacing a 250kW EV drive inverter from silicon IGBT to Wolfspeed SiC MOSFET’s reduces the inverter losses by ~80% across the combined driving cycle. Details are shown in figure 6. For the OBC, using SiC can increase system-level efficiency by >1.5% whilst increasing power density by over 30% when compared to traditional silicon approaches. 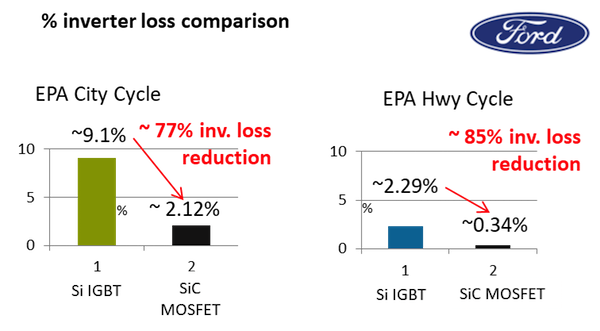 To shorted customers design cycles and quantify the SiC value proposition Wolfspeed developed a high-performance 250kW three-phase evaluation kit targeted at the EV drive train. The kit is designed to enable customers to prove the real-world benefits of SiC devices, in an optimized inverter stack-up, in their own laboratory environment with a minimal amount of resource investment in proof-of-concept system design. Wolfspeed’s 250kW Evaluation Units weigh in at just under 16 kg with a volume of 26.3 L (44 mm long, 39.8 mm wide, and 15 cm tall) as shown in Figure 7.

Utilizing the CAS module optimized packaging Wolfspeed has focused on developing high gravimetric- and volumetric- density solutions, which also maintain incredibly low parasitic inductance - boasting just 7.5nH of inductance, while weighing in at only 180 grams and occupying nearly the same space as your average smartphone. The inverter design can deliver up to 250 kW continuous power at 850-900 VDC bus at 20 kHz PWM switching – with ~ 80% reduction in inverter loss (over the combined operation cycle) than an equivalent Silicon IGBT inverter. 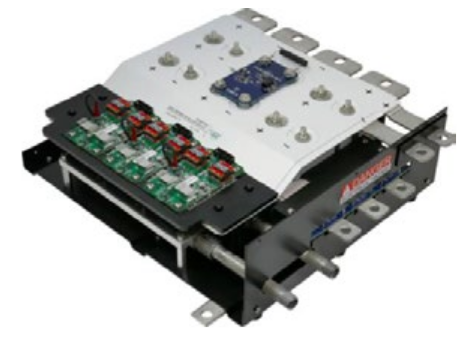 Utilizing the Advantages of SiC

The tipping point for SiC availability and adoption has occurred and in many markets today the customer base is harvesting the advantages SiC gives. Wolfspeed has been pioneering the SiC revolution and with the largest most proven product portfolio in the industry – by far, the design community has real SiC solution – today that increase system-level efficiency, reduce overall system board size, increasing system power density and last, but by no means least, lower power BOM cost versus conventional inefficient silicon-based topology approaches.

Say adieu to preliminary datasheets, powerpoint roadmaps, and fake news as through leveraging its 30 years of experience in SiC design, optimization and high volume manufacturing Wolfspeed has developed high-performance reference designs, built around their SiC-optimized power discrete and module product line, which are targeted at ensuring that end-system designers invest minimal effort in learning the best-practices associated with achieving optimized performance for SiC-based system design.

Guy Moxey works as the Senior Director of Power Product Marketing & Applications at Wolfspeed, A Cree Company, Durham, North Carolina. He earned his Bachelor of Engineering in Electrical and Electronics Engineering with Honors at the University of Brighton, Eastbourne, England. He then acquired his Master's of Science in Power Electronics at the University of Birmingham, Birmingham, United Kingdom.