Learn about the merits of the equipment grounding to protect people in faulted AC power systems.

Electrical equipment casings should be at earth potential under normal conditions. When a fault occurs in an ungrounded casing, it will remain energized, creating a threat to people's safety. If you are grounded and touch that housing, a dangerous current will flow through your body.

The magnitude of this current may not be enough to activate the circuit protection, but it could be enough to kill someone. Equipment grounding provides a secure, low impedance path to ground, allowing a sufficient amount of current to flow to trip a breaker or blow a fuse, removing the hazard.

In the last article regarding AC equipment grounding, we analyzed the dangers of electric shocks. This article will focus on proper safety measures as noted by the National Electrical Code (NEC).

The basis of this article is the National Electrical Code (The NEC). The NEC is a set of rules and regulations for the safe installation of electrical equipment and wiring used in the United States and other countries. The methods discussed in this article are mainly for low voltage power, heat, and light.

One of the reasons for the misunderstandings that appear when handling the subject of equipment grounding is the use of inappropriate terms. To avoid this situation, everyone should speak the same language, and the recommendation is to use the terms defined in the NEC, Articles 100 - Definitions - and 250 - Grounding.

The use of unofficial or ambiguous terminology can cause confusion and increases the chance of making mistakes in grounding installations.

The NEC is a complex set of standards. This article will give a general overview. Readers should still consult the NEC before working with AC equipment grounding techniques.

The term equipment grounding refers to the grounding of parts of the electric system that do not regularly conduct electricity, like service equipment, the frames of appliances, metal conduits, and metal shields of shielded cable. The primary purpose of equipment grounding is safety.

Grounding keeps all equipment at the same potential, decreasing the possibility of harming a person in contact with two metal parts that could have different potentials when electrical failures occur. This permanent joining of metallic parts to form an electrically conductive path is known as bonding.

When the electrical systems fail, people's lives may depend on a proper grounding installation. Equipment grounding provides a dependable, low impedance path to the fault current for the correct operation of protective devices.

Equipment grounding and system grounding come together only at the power source, such as the service equipment.

Basic Concepts of Grounding for Safety

Figure 1 shows a 3-wire, single-phase overhead service to a building. It starts at the service point on the load side of the transformer. The transformer usually belongs to the utility company, but may also be a customer's property.

A load is any piece of equipment connected to the wiring that consumes power, like a lamp, a motor, a fridge, or a microwave oven. The power comes into the premises over three conductors, the service-entrance conductors. The conductors marked a and b are ungrounded and called phase conductors or hot wires.

The utility company grounds the neutral at the transformer for three reasons:

Figure 1 also shows phase a supplying a single-phase, 2-wire, 120 V load. Here, conductor N is not a neutral but just a grounded conductor. The reason is that a neutral carries the unbalanced current of phases a and b, and in this circuit, the conductor takes all phase a (or load) current.

The conduit connection to the ground is accidental or incidental, meaning that the grounding is not by design. Incidental grounding happens when attaching the conduit to a support connected to the earth. So there is very high resistance in the ground circuit between the conduit and the neutral ground connection.

If the phase conductor insulation fails (ground fault), the fault current will flow through a high resistance circuit. It will not be of the magnitude necessary to operate the circuit protection. Then the conduit will be energized at 120 V, which will pose a risky condition for people who can touch it.

The conduit shown in Figure 1 represents any ungrounded metallic frame of electrical equipment.

Figure 2 shows an ungrounded equipment frame under ground fault conditions. The protection devices do not clear the fault, allowing the structure to sustain 120V to ground. A person’s body in contact with a grounded element touches the frame and becomes part of the fault circuit. The dotted line shows the path the fault current follows through the body, a condition that will probably cause a sharp shock and perhaps death. 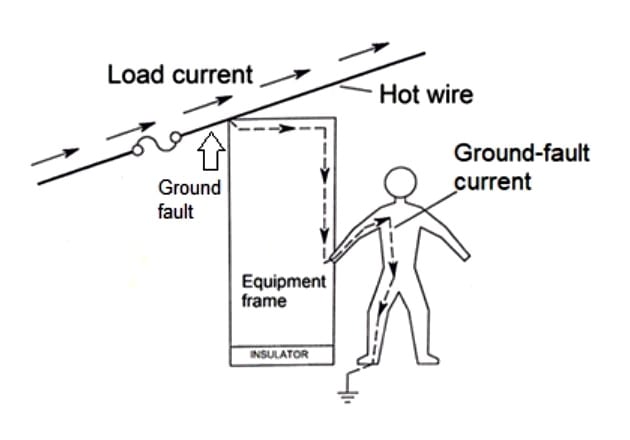 Figure 3 shows the same ground fault but this time with a grounded equipment frame. Here, a ground-fault current of sufficient magnitude flows to operate the circuit protection adequately, and the structure, at ground potential, does not pose a shock risk. Do not connect the equipment frame only to the physical ground, but in the way indicated by Article 250 of the NEC as described in the following paragraphs. The NEC prohibits using the earth as an effective fault-current path.

The grounded conductor runs from the source to the load without switches or overcurrent protection, although it may be spliced or connected to terminals.

Once again, the grounded conductor, whether it is a neutral or not, is grounded twice. Once to the grounding electrode system at the service equipment, and once to the transformer serving the property.

No harm follows if someone touches an exposed grounded conductor or a component of the grounding electrode system, as described in the following paragraphs. Every time you touch a faucet or a water pipe, you are in contact with the grounded conductor. The EGC does not carry current during regular operation, but it does when there are damages or defects in the wiring system or the connected pieces of equipment. The dotted line shows the path of the fault current. Since this path has a low resistance, the fault current will have the required magnitude to operate the protective devices.

The NEC recognizes that the EGC also performs bonding.

When using metal conduit or cable with a metal shield, the conduit or shield serves as the equipment grounding conductor. Figure 5 shows a metallic conduit fulfilling this task. 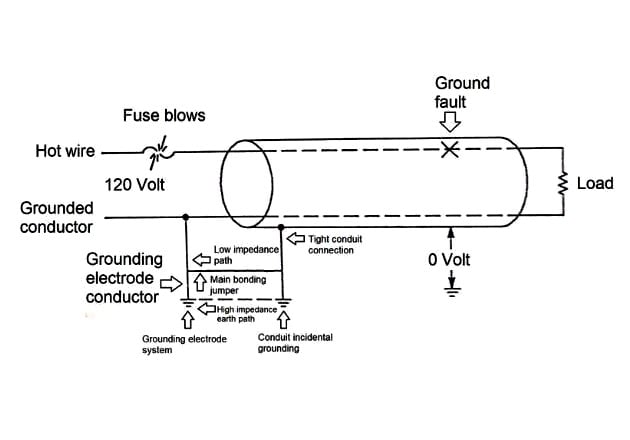 Although the metallic conduit provides an electrical path, loose connections could interrupt this grounding conductor. The recommended practice is to run an additional wire in each conduit to offer a continuous and reliable second route. By doing this, the fault current divides between the conduit and the additional wire.

Adding a wire does not decrease the need for electrical continuity between the housings and the conduits. Either way, the current will flow through the metal components and, if there are loose connections with high resistance, arcs and heating can occur with the risk of fire.

Figure 6 shows the EGC connections, in a 3-wire, single-phase service.The EGC goes from the equipment frame to the grounding terminal bar in the service equipment, bonded to its enclosure. Except in some special applications, the equipment grounding conductor may be grounded at several points. But the neutral or grounded conductor must be grounded only at the service.

The load current, supplied by the hot wire, will return to the source through the grounded conductor and all the grounding system, including the equipment grounding conductors, building steel, metal raceways, and water pipes.

These circulating currents will energize metallic frames and generate potential differences between the neutral of electronic equipment and ground.

Figure 7 shows the flow of objectionable current when the grounded conductor has various grounding connections. If you suffer a shock when touching the fridge or a metal frame at home, the most likely cause is a neutral or grounded conductor connected to ground in more than one location. If you are wet, the shock can be much larger than expected.

The identification of grounded and equipment grounding conductors is critical, and the NEC gives methodical rules to accomplish this.

When using color codes, the general guidelines are:

There are no explicit color rules for hot wires. They may be any color excluding those mentioned above. Common choices are black, red, and blue.

It is essential to wire the grounding receptacles correctly to protect the users from shocks. There is no rationale for doing it wrong because this is an easy job.

Figure 8 shows the correct wiring of a conventional grounded receptacle. The installation follows the rule black to brass, white to light, green to green. Although not mandatory, the typical installation practice is placing the opening for the grounding prong of the plug at the top. In this way, if a plug is inserted partially in the receptacle, exposing part of the prongs, and a metal object falls into the space between plug and receptacle, the grounding prong will block the object's route to the hot prong, avoiding a ground fault.

Sometimes a standard circuit breaker or fuse cannot protect people against ground faults because the fault current is too low for them to operate. However, it could flow through a person in contact with the faulty equipment and a grounded surface.

A GFCI is an electronic device that effectively protects people by quickly interrupting the current to a circuit or a portion of it under ground-fault conditions. It is very sensitive and reacts to small fault currents, but there is no protection for phase-to-neutral and phase-to-phase faults.

The GFCI monitors the current to and from the load. If the wiring, a tool, or appliance allows some current to leak to ground, the GFCI will detect the difference in current in the two wires. When the fault current exceeds the trip level, it will disconnect the circuit in as little as 1/40 s.

The GFCI is an excellent supplementary safety precaution, especially when using electrical equipment in wet places like outdoors, bathrooms, and kitchens. The NEC requires the use of GFCI in specific locations in a dwelling and other units where the likelihood and severity of shocks are high. The GFCI will not prevent a person from receiving a shock, but it will open a circuit quickly enough to prevent injuries.

Several types of GFCIs are available, and they do not require an equipment grounding conductor.

A Review of Safe Grounding Techniques

The National Electrical Code (The NEC) establishes the minimum standards for wiring design and installation practice in the United States and other countries. These rules protect people from fire and other hazards.

In addition to the safety rules, the NEC provides technical terminology that, when used by everyone, reduces the misunderstandings that exist regarding the topic of grounding.

Equipment grounding connects to ground the metallic components of the electric system that do not carry electricity under normal conditions.

The grounded conductor connects to ground at the service only. It goes from the source to the load without any interruption or overcurrent protection.

The equipment grounding conductor, bonded to the grounded conductor, provides a safe and secure low impedance path for the ground-fault current, expediting the operation of overcurrent devices. It can be connected to the ground in several places.

The main bonding jumper is a crucial element that carries all the fault current from the equipment grounding arrangement back to the power supply.

The grounding electrode system provides the connection of the electrical system to the earth.

The NEC does not allow the flow of current through the grounding system – called objectionable currents - other than temporary ones that appear under ground-fault conditions.

The color of the insulation identifies the category of the conductor.

The use of a GFCI is convenient and required by the NEC in places with an increased chance of shocks, like wet environments.