The Basics of Grounding Electrical Systems

The Basics of Grounding Electrical Systems

This article breaks down the complexities found in the fundamental field of grounding for the correct, faultless operation of electrical systems.

Grounding, or earthing, is a fundamental topic for the correct operation of electrical systems and devices. However, few people understand this matter or the reason it is used.

Grounding is a huge topic full of standards, practical rules, misconceptions, surprises, and some magic. The rules for grounding are quite difficult, and at times appear unclear.

This introductory article discusses the basic principles of grounding, provides an overview of the main grounding applications, and lays the basis for examining these applications from first to last.

In analyses of electrical installations, you will frequently see the terms ground, grounded and grounding. There are several formal definitions of these terms in different standards and codes. However, as its name suggests, grounding is a connection of the electrical system, electrical devices, and metal enclosures to the ground. It is also known as earthing, i.e., connection to the earth.

Even though non-grounded electrical systems do exist — either because they are excepted from grounding by codes or by operational reasons — most arrays are grounded in one way or another.

Is the Ground a Conductor of Electricity?

Although not the best, yes, the ground is an electrical conductor. It is used to carry fault currents, signals, and radio waves.

Groundwave propagation is particularly important on the low- and medium-frequency portion of the radio spectrum. There are underground low-frequency radio antennas that were developed during the early days of the 20th century. This electrical property becomes visible when lightning travels to and fro the earth. 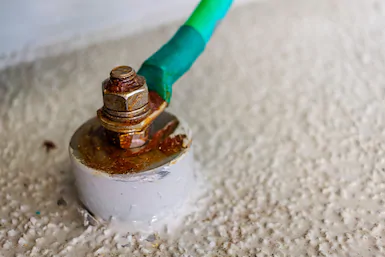 It is also important to know that sometimes the earth, as a conductor, is assumed to have a potential of zero and is taken as reference in many voltage measurements.

Power system grounding is very important since most faults involve ground. Then, it has a basic role in the protection of its components as well as safety for the operator. There are a variety of grounding techniques utilized for mooring an electrical system to the ground. Let’s look at each type next.

Most neutral grounding is solid. In this method the neutral is kept at ground potential, with the following advantages:

Other grounding methods are sometimes employed in systems 600V and below.

People must be safeguarded because a small quantity of current circulating through the body may cause big damage or death.

Equipment grounding connects all non-current-carrying metal parts of the wiring system or apparatus to the ground. Examples include the cabinet of the service equipment, the frames of transformers and motors, the metal conduit and boxes, the metal shield of shielded cables, poles, towers, and more.

Equipment grounding limits voltage between non-current-carrying parts and between these parts and earth to a safe value, boosting protection. It also enables fast fault clearing.

Furthermore, to protect people and animals in the vicinity, power plants and substations are built on grounding mats. This practice minimizes electric shock potentials. 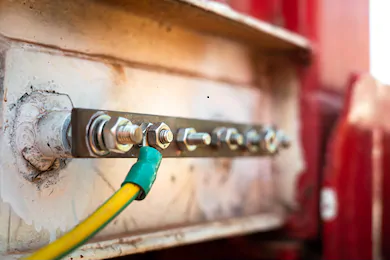 Bonding consists of the interconnection of all non-current-carrying metal parts of the installation to assure electrical continuity and conductivity. In this way, metal pieces are at a common and minimum potential above the ground. Codes require bonding in grounded and ungrounded arrays.

This interconnection behaves as a low impedance path that conducts ground-fault current safely and helps the swift operation of overcurrent protective devices on a grounded system as well as the operation of ground fault detectors on high-impedance grounded and on ungrounded systems.

Codes also deal with the bonding of metal building parts (non-electrical) that may be energized accidentally.

The purpose of controlling static charges is to protect people and property.

Electronic components and equipment are incapable of withstanding the instantaneous power produced by static. There are several methods of safeguarding from the hazards of static electricity, grounding and bonding are two of them.

Hazardous locations are particularly important to grounding because they may have flammable or ignitable materials and sparks caused by static could ignite the atmosphere.

Electrostatic induction may also be the origin of transient conditions that triggers unintentional events in adjacent circuits, producing false relay operations, tripping of circuit breakers, or false signals in control circuits, to name a few.

Lightning protection plays a key role in the design and operation of electric power systems. In areas with frequent storms, lightning is the most common cause of outages and damage.

A lightning protection system intercepts or diverts lightning and provides a certain path for conducting the surges safely to the ground by adequate down conductors to grounding electrodes. Thus, it helps prevent disastrous events like fires, injuries, and deaths. 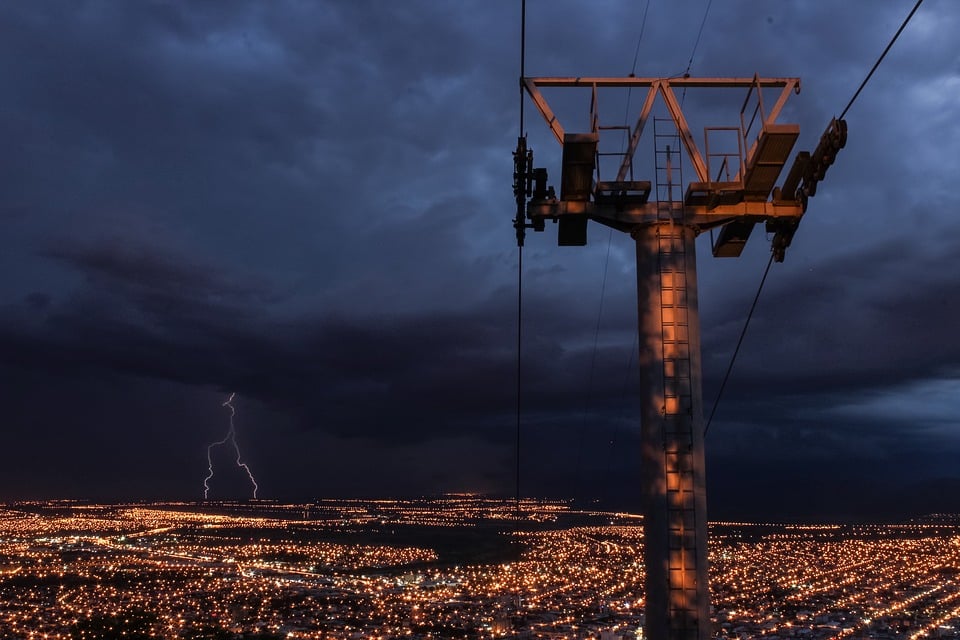 Lightning protection plays a key role in the design and operation of electric power systems. Image courtesy of Pixabay.

In addition to electric power systems, tall structures like smokestacks, tanks, towers, and buildings may require lightning protection systems, although not all objects or structures at a given site will need them. Again, hazardous locations are important because lightning produces sparks and the risk of fires and explosions is high.

Keep in mind that it is impossible to protect 100% of a structure from direct impacts, except by completely encapsulating it with metal.

Regarding transmission systems, a well-devised ground wire system can substantially reduce the outage rate because it will shield the phase conductors by receiving the direct impact of lightning strikes.

Transient overvoltages are daily events in electric power systems. Switching is their main initiator, but switching surges are relatively easy to handle. However, lightning surges are the most severe and difficult to manage. They may increase the system voltage to many times the rated voltage. If the equipment in the power system is not protected against lightning surges, considerable damage will occur.

Likewise, surge arresters are connected in shunt across the pieces of electrical equipment to divert transients to the ground.

Computers, communication systems, instrumentation, and control equipment require proper grounding for correct operation. More often than not, the safety grounding of equipment is the same for electronic equipment as it is for any other kind of apparatus. 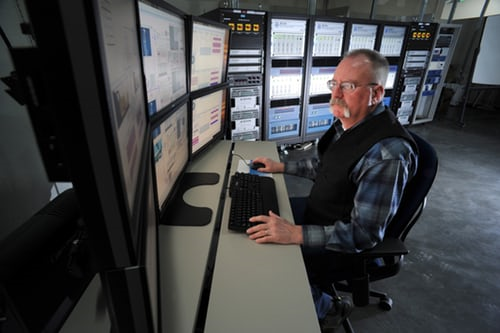 Occasionally special grounding techniques, different from conventional safe grounding practices, are applied to electronic equipment, but care must be taken to avoid these techniques leading to unsafe practices.

Some electrical distribution systems for electronic equipment have been installed mistakenly in an intent to minimize the amount of electrical noise seen in the grounding system. But these installations do not comply with the rules of the National Electrical Code (NEC), jeopardizing personnel safety.

Protection of data circuits from disturbances or damage does not always involve grounding, although good grounding makes this protection easier.

A Review of Grounding Techniques and Uses

One of the most important but least understood considerations in the design of electrical systems is grounding.

Grounding consists of a low impedance connection to the earth. The ground is a poor conductor but good enough for this purpose.

Grounding has a key role in the correct operation of the electrical systems, either power or electronics, as well as protecting people.

Fundamentally, grounding an electronic system is the same as grounding any electrical system. However, care must be taken to prevent special grounding techniques from generating hazardous conditions.