Applications such as elevator drives or servomotors have several special requirements. One on hand, high efficiency is important, while on the other hand,

Applications such as elevator drives or servomotors have several special requirements. One on hand, high efficiency is important, while on the other hand, the inverter unit is resilient to the different types of load cycling. Furthermore, the inverter must be designed as compact as possible. NX7 CIB modules aim to address these challenges.

Each CIB module consists of an integrated 3 phase inverter part, a converter (3 ph diode rectifier) part and a brake chopper part. The line-up of the latest NX7 CIB modules is shown in Figure 1. The NX7 CIB modules utilize the latest 7th generation CSTBTTM IGBT along with the RFC (Relaxed Field of Cathode) diodes. The electrical characteristics of the new thin wafer 7th generation chips have been tuned for the reduction of overall power losses.

Figure 2: Cross section of the NX7 package versus a conventional module package.

Operating the inverter at elevated switching frequencies helps in reducing the audible noise, hence low loss operation even at high switching frequencies is an important capability for applications such as elevators. In addition, limiting the IGBT chip temperature rise during low rotation speed (low output frequency) operation is a key requirement.

Figure 3 indicates the overall power loss comparison of an NX7 CIB module (CM50MXUA-24T) with a previous 6th generation IGBT module (CM50MXA-24S) considering different switching frequencies and a low output current frequency of fout=5Hz. The benefit in terms of power loss between a conventional module and an NX7 CIB module increases with an increase in switching frequency. This can be attributed to the optimization in the trade-off between the switching losses and the ON state losses in the new 7th generation chip technology. A combination of loss reduction and the low thermal resistance (chip to the case) offered by the 7th generation chip technology ensures that the maximum junction temperature can be reduced by utilizing the NX7 CIB module. The analysis indicated in Figure 3 has been carried out considering a target switching dv⁄dt (max)= 10 kV/µs.

Intermittent operation is a characteristic feature of applications such as elevators. The impact of load cycling can be categorized into two types of cycling phenomena: power cycling and thermal cycling. Power cycling refers to a cycling of the junction temperature which affects the reliability of the chip-tobond wire contact whereas thermal cycling refers to the cycling of baseplate temperature which conventionally affects the solder layer connecting the isolation substrate and the baseplate. But due to the elimination of the ceramic substrate and the solder layer, the limitation pertaining to thermal cycling is not present in NX7 CIB modules.

It is common for applications such as elevators to experience operation cycles where the heatsink temperature rises to an allowable point and then falls back to the ambient temperature. The session involving continuous operation which would generate a temperature swing at the heatsink would also involve temperature swings at the case of the power module and at the chip surface (junction). An example of such operation is represented in Figure 4. For this analysis, the Mitsubishi Electric 6th generation modules represent the conventional modules.

The following points are the key conclusions from Figure 4:

Operating cycles (in the range of a few seconds) which generate temperature swings only at IGBT chip (∆Tj) affect the reliability of the chip to bond wire contact. The amplitude of the ∆Tj is the deciding factor with regards to the power cycling lifetime. This point has been addressed by employing the low loss 7th generation chip technology in combination with the optimized chip to case thermal resistance in the NX7 module. This combination ensures that for the same operating condition, the corresponding ∆Tj is lower (compared the performance of the conventional module). This tendency can be understood from the following results indicating power cycling capability based on the conditions mentioned in Figure 3 (for fc = 12 kHz): 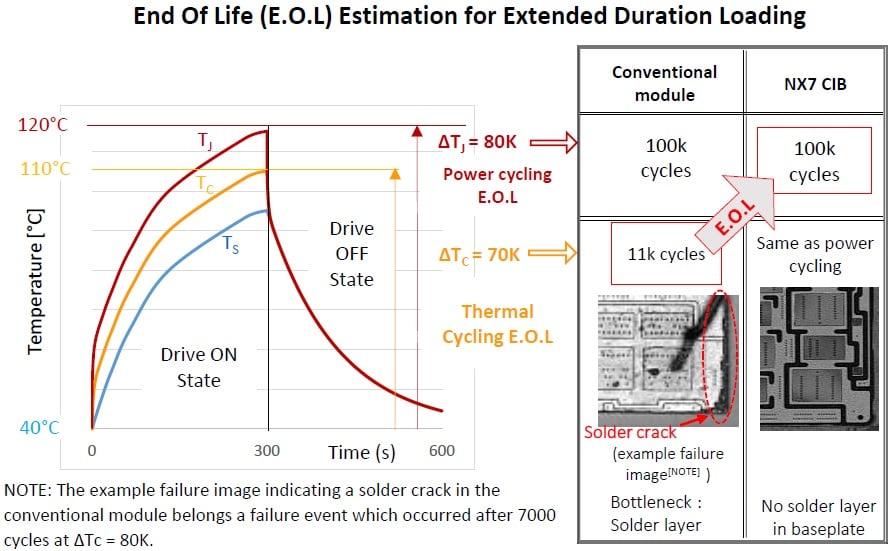 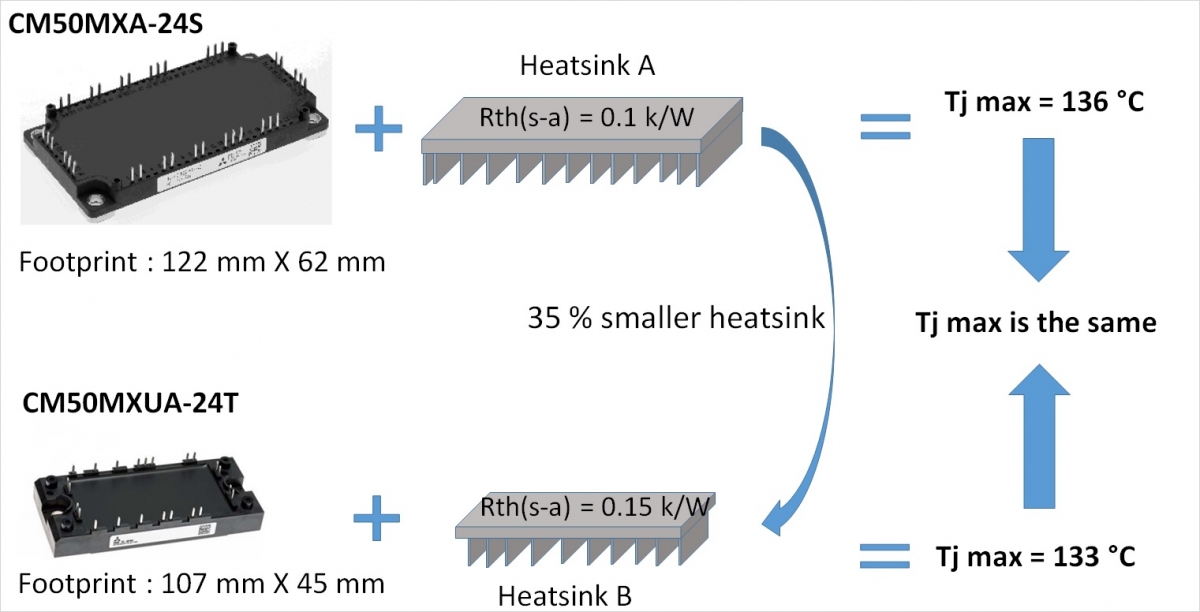 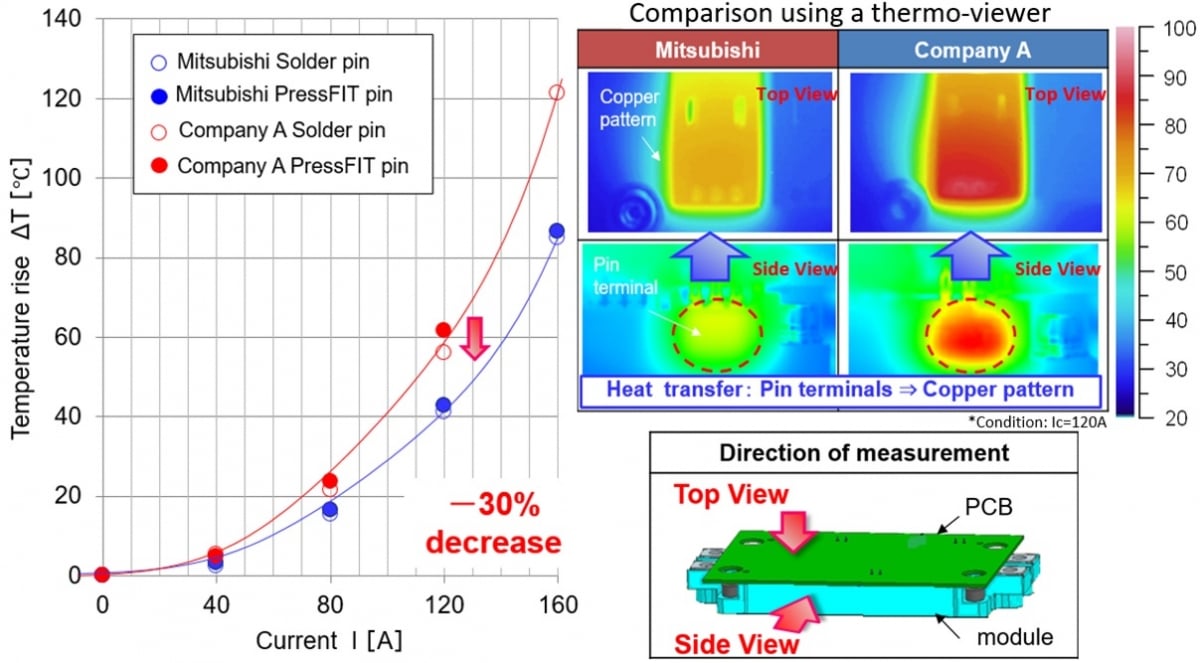 Figure 6: Optimization of terminal temperature in the NX7 CIB module.

Overall improvement in a lifetime has been ensured by the following two-step strategy:

To achieve a compact design, several important considerations have to be made. The following points illustrate the advantage offered by adopting an NX7 CIB module.

The requirements of applications such as elevator drives have been taken into consideration while developing the NX7 CIB module. The unique combination of the SLC technology packing and the 7th generation chip technology allows the designer to develop an efficient, reliable and a compact inverter that can be used as a platform solution for multiple power levels.