While deep space exploration demands component survivability for 20 years or more in the harshest of environments, the higher volume satellite constellations in low Earth orbit are driving a requirement for cost effective components destined for operational use over just three to four years in more benign conditions.

“The space industry is changing fast and the electronics industry that supplies its components is changing with it. In times past geostationary satellites and exploratory spacecraft were the domain of governments and large-scale technology companies. But that is all changing,” observed Robert Coleman, TT Electronics’ Technical Sales Manager in a recent blog post.

“We are seeing a rise in the use of smaller, lighter satellites being built by commercial organisations – and this ‘NewSpace’ industry has different demands. The industry is developing ways of achieving faster, better, and cheaper access to space and spaceflight technologies, increasingly driven by a commercial end point, rather than politics or scientific progress.

“In 2016 Boeing also filed plans with the US Federal Communications Commission (FCC) for a satellite system of between 1,400 and 3,000 satellites, while SpaceX is studying a system of about 4,000 satellites. 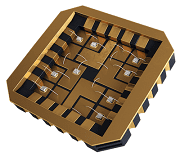 MCAs offer multiple discrete components in a single hermetic package, whether they are active, passive or mixed.

“With low-earth orbiting satellites a few hundred kilometres above the Earth the component specification is that they can withstand a radiation dose of perhaps 40-50 kiloRads instead of the 100 kiloRads you might find in the Clarke Belt, about 36,000 km from Earth.

“At TT Electronics we are well versed in designing, testing and producing such rad-hardened components,” concluded Coleman.

As part of mission licensing, the space agencies that sanction the launches need to know the components will work after this time to ensure appropriate deorbiting and decommissioning of the satellites, and that no space debris is left in the atmosphere. This is where TT Electronics’ New Space Electronics comes in as a solution that delivers cost effective screening using fully traceable and space proven die.