Thomas Edison: The Electric Spark in an Industrial Era

Thomas Edison: The Electric Spark in an Industrial Era

Thomas Edison holds a world-record 1,093 patents for everything from an improved telegraph to a functioning electric vehicle. His contributions to engineering helped bring technology into the electric age.

The most inventive electrical engineer in history before “electrical engineers” really existed, Thomas Edison (1847-1931) created and improved many 19th and 20th Century gadgets from the telegraph to electric cars.

Born in Milan, Ohio, Thomas Edison had very little education for such a prolific inventor. At 13, Edison started his career as a newsboy at the local Grand Trunk Railroad. It was there that he spent much of his free time reading scientific and technical books and was taught how to use a telegraph by the station agent. At 17, Edison was a proficient telegraph operator, traveling between Canada, Michigan, Indiana, and Boston sending out Morse code communications. 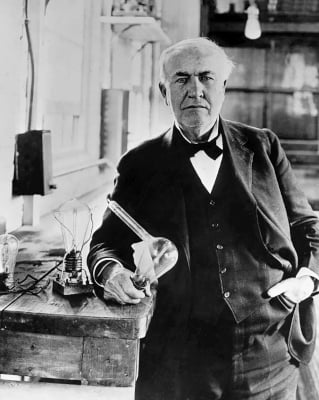 Thomas Edison, circa 1925, holding a replica of the first lightbulb. Image used courtesy of Britannica

Arriving in Boston in 1868 at the age of 21, Edison began his transition from telegrapher to inventor, receiving his first of a world-record 1,093 patents on an electronic vote recorder. Unfortunately, this invention was a “commercial failure” due to its unconventional nature at the time, which helped Edison understand the importance of inventing for the public interest.

A year later, Edison moved to New York City and released his first successful invention, the “Universal Stock Printer.” He was paid $40,000 for the improved stock ticker and used this money to fund his first small laboratory and manufacturing site in Newark, New Jersey. He capitalized on his early career as a telegrapher, dedicating his time to designing and building many devices which improved the efficiency of the telegraph.

In 1878, Edison moved his lab to Menlo Park, New Jersey, the first of two of his industrial research labs deemed possibly his greatest invention and a model for modern facilities. It was at Menlo Park that Edison invented the carbon telephone transmitter, the phonograph, the Edison dynamo, and the incandescent lightbulb. Edison’s achievement of the incandescent bulb led to the first commercial power station in lower Manhattan - providing light and power to an area just smaller than Central Park - and the beginning of the electric age.

The success he found in New York City brought Edison world acclaim and quickly electricity spread across the world. By this time, Edison had various electric companies he had started to support this venture, which in 1889 he combined to form Edison General Electric. In 1892, Edison General Electric merged with Thompson-Houston, its top competitor, to form the company we all know today, General Electric (GE).

Edison continued to find new challenges and opportunities for his work in electrical technology, including building a fully operational energy-self-sufficient home and developing greater battery storage for electric vehicles.

The height of Edison’s career was during the time of the second Industrial Revolution. Together, the first and second Industrial Revolutions spanned approximately 1733-1913, transitioning the world from manual to automatic in a spurt of economic growth, new technology, and new opportunities. This period is also considered by many scientists to be the start of “industrial-era warming,” increased global warming as a result of a rapid rise in air pollutants.

In his own way, Edison contributed to the unhealthy conditions of the Industrial Revolution. He developed industrial chemicals that would not be allowed anywhere near a lab today and his famous incandescent lightbulbs and other inventions that made the world dependent on electricity were powered by coal, oil, and natural gas, all heavy pollutants. However, he understood the environmental harm caused by air pollutants and recognized the limit to natural resources. He encouraged his fellow inventors to experiment with wind and solar before other resources were exhausted.

An entrepreneur at heart, Edison realized that if homes could source their own power, he could expand the market for his batteries, bulbs, and other electricity-intensive devices. He wanted to bring windmills, first created in 1888, to countrysides and homes. In 1911, he pitched a prototype for a windmill that could power four to six houses in one community.

Edison showcased the first energy-self-sufficient home - his own mansion in Llewellyn Park, NJ - in 1912, the “Twentieth Centry Suburban Residence”. It was complete with heating and cooling, a washing machine, an electric stove, and run off of his batteries. While designed to be powered by a windmill, the home was ultimately connected to the grid.

Electric Cars of the Twentieth Century

The invention of the electric car evolved in a series of breakthroughs across inventors and countries. In the U.S., the first successful electric car was debuted by William Morrison in 1890 in Des Moines, Iowa. The reason for its early rise was similar to the reasons today. The gas-powered car, which received its first patent in 1886, was considered difficult to drive, noisy, and to have an unpleasant exhaust. On the other hand, electric cars were easy to drive, didn’t release smelly pollutants, and were quiet. The quieter alternative was soon in high demand, accounting for nearly 40 percent of all cars on the road.

Edison saw the electric phenomenon as America’s key to independence, providing everyday individuals with mobility and self-sufficiency. He got to work on redesigning the electric battery, originally lead-acid, to what he believed was a more resilient option, nickel-iron. He teamed up with Henry Ford to mass-produce electric cars with nickel-iron batteries. Ford bankrolled the entire early production, hoping to sell the vehicles for as little as $500 to $700. The promise of a cheaper electric vehicle with 100 miles of runtime sparked the interest of newspapers, carmakers, and families all across America. 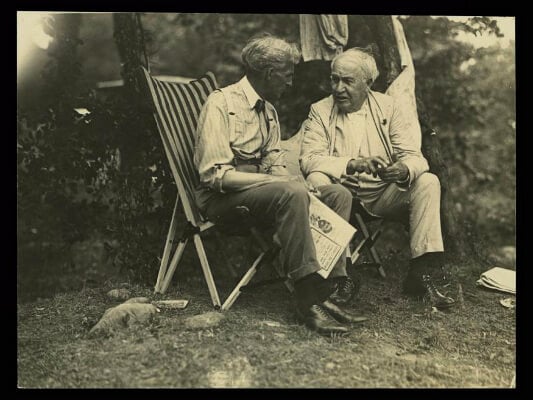 Together, they even devised a plan for charging electric vehicles at home, at public charging stations, and offering battery swaps at service stations for long-distance travel. With the rising cost of oil and the popularity of electric vehicles, everything seemed to be falling into place. That is until Edison’s plan for the nickel-iron battery took a decade to fully develop.

In the same decade he spent perfecting his electric battery, other engineers were spending the same time improving the internal combustion engine. By the time Edison was ready, gas-powered cars had taken over the roads and were suddenly the more economic option. The real blow: the mass-produced Model T.

Despite originally teaming up with Edison to bring electric independence to America, Henry Ford’s ubiquitous and affordable gasoline car helped put an end to electric vehicles in the 20th Century.

I’d put my money on the sun and solar energy. What a source of power! I hope we don’t have to wait until oil and coal run out before we tackle that. - Thomas Edison, 1931

Luckily for Edison, he did receive a patent for his electric vehicle design and found a use for his new batteries with railroads, boats, and mines. 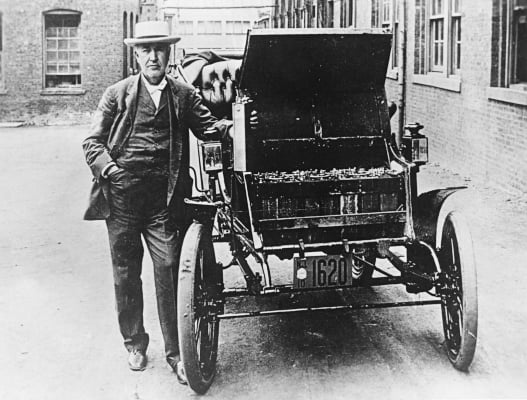 Thomas Edison with his electric car in 1912. Image used courtesy of Hagerty

Edison’s many intellectual creations paved the way for much of modern technology. Without his work, we wouldn’t have electrically-lit homes, music players, or dedicated industrial research labs.

His foray into renewable energy had the opportunity to create a cleaner future, one in which we would likely be less concerned today about rising temperatures and looming environmental threats. Luckily, as scientists and engineers work backward to help us move forward, Edison’s nickel-iron batteries are still proving to be a more resilient alternative.

Engineers have recently discovered that when electricity is sent through the recharging nickel-iron battery, it creates a reaction similar to electrolysis, releasing oxygen and hydrogen. This reaction is one way that hydrogen is created to use as a fuel - a completely clean fuel depending on the energy used to charge the reaction. The team working on this also found that the batteries are more stable when fully charged than the typical lithium-ion batteries used in modern electric vehicles. They hope that the nickel-iron batteries will be a new solution to energy storage and clean fuel.

Thomas Edison was recognized by many institutions during his life and posthumously. Edison received eleven awards including the Navy Distinguished Service Medal, the Congressional Gold Medal, and the John Fritz Medal in addition to being inducted into the Automotive Hall of Fame in 1969.