Once considered the future of passenger electric vehicles, the technology is being abandoned by automakers in favor of Li-ion batteries.

For years, hydrogen fuel cells were seen as the future of electric vehicles (EVs). With governments increasingly limiting the circulation of petrol and diesel cars to reduce emissions, the 2020s should have heralded a promising new era for their aplication.

Yet today, nearly every automaker on the market has dropped hydrogen fuel cell electric vehicles (FCEVs) entirely. In the U.K. last year, just 12 FCEVs were registered, this in contrast with the nearly 200,000 new Li-ion battery-powered EVs (BEVs) that hit the road.

When and, more importantly, why did this shift occur? We dive into the history of FCEVs down below, together with an exploration of their decline and a look to the future.

Though the hurdles associated with FCEVs are now clear, let’s first delve into why the technology was originally perceived as the future of sustainable transportation.

For one, hydrogen by mass has nearly three times the energy density of gasoline, and so is able to power vehicles with far greater range. This is especially true when compared to BEVs, which even today are limited to a range of less than 500 miles. For comparison, Toyota’s second-generation Mirai recently completed an 845-mile journey on a single tank. 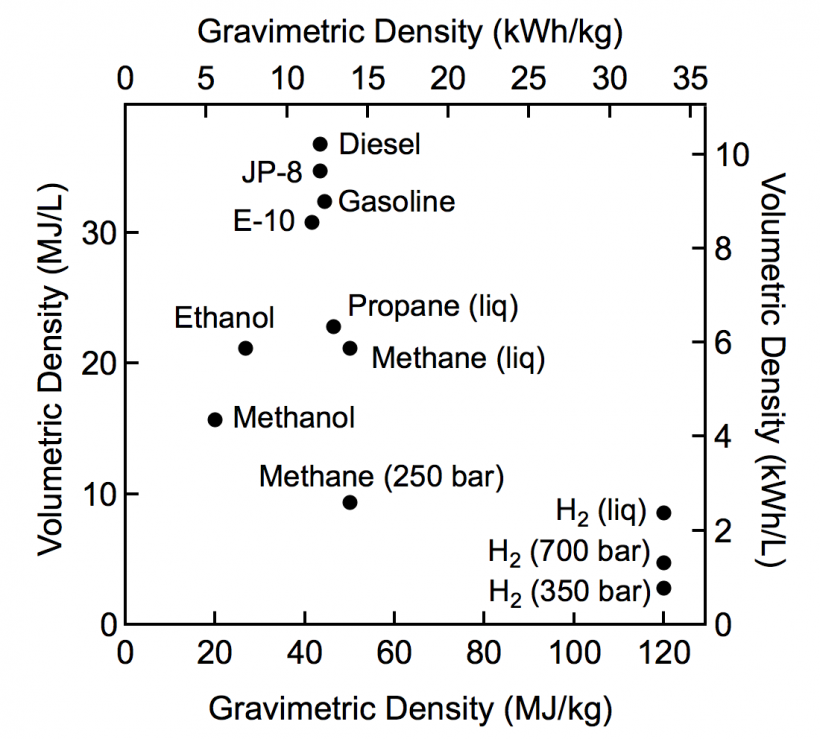 Hydrogen, by mass, is much denser than gasoline. Image used courtesy of the U.S. Department of Energy

In addition, it was thought that consumers would be able to fill their FCEV tanks the same way they do traditional gasoline or diesel-powered vehicles. Infrastructural changes would thus be relatively few, with little adjustment required from either car manufacturers or fuel providers.

And, despite greater technical challenges, that has largely held true. At modern hydrogen refueling stations, it takes but five minutes to fill up.

If you can find one, that is.

Insufficient Infrastructure for an Inefficient Fuel

In reality, fueling an FCEV in almost any state outside of California is a complete non-starter. There are a handful of stations in the Northeast, but elsewhere, fueling infrastructure is nearly non-existent. The landscape is similarly sparse in the U.K., where just 14 public stations operate across the whole of the country. 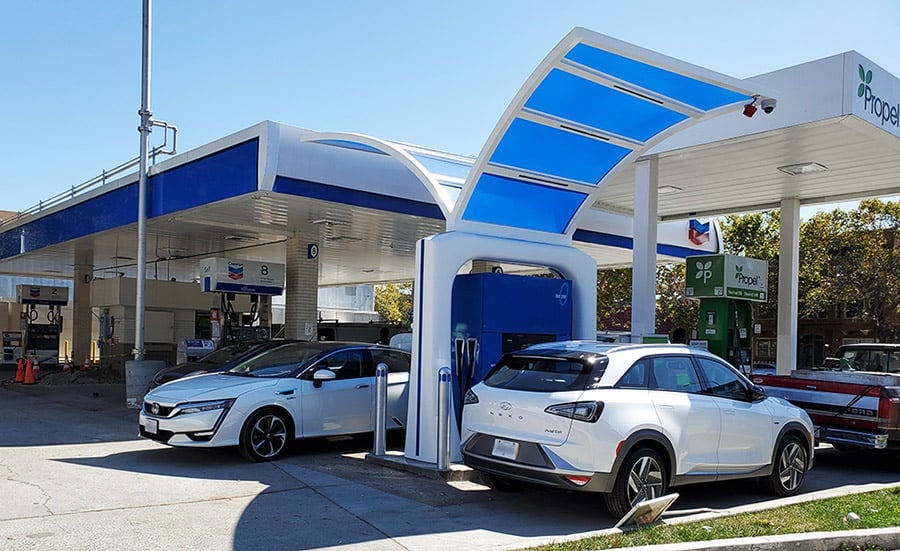 This compounds the fact that hydrogen, as a fuel, is difficult to produce and distribute without problematic efficiency loss. Electrolysis, the process by which hydrogen is split from oxygen in water, requires enormous amounts of energy and is only 70% efficient.

Cooling the hydrogen for transport and storage leads to additional efficiency loss, and converting it into electricity leads to yet more. By the time hydrogen is propelling an FCEV, more than half of its potential energy has been lost.

And the cost of getting it there is borne by the consumer. The Mirai and Hyundai’s Nexo, two of the most prominent models on the market, both run in excess of $49,000.

Even with Toyota offering significant discounts in California, and South Korean government subsidies slashing the Nexo’s price in half, that’s a hard bargain in the face of a lacking fuel network. Neither company sold more than 10,000 models in 2021.

The Emergence of BEVs

Despite their reduced range, BEVs have rapidly overtaken FCEVs in the past decade.

One of the primary drivers of this shift is that BEVs are considerably more energy-efficient. As electricity can be pulled straight from the power grid, charging and then driving a BEV leads to just a 20-30% loss in energy, far lower than that associated with hydrogen.

Once on the road, drivers can also take comfort in an ever-expanding network of charging stations. Tesla alone has installed nearly a thousand supercharger stations in the U.S., and the company is in the early stages of opening its stations to non-Tesla vehicles. Electrify America, a competitor in the charging space, has its own network of more than 700 stations positioned throughout the country.

The result is cheaper, more versatile, and more reliable vehicles. And demand is booming.

With even Toyota, which started investing in hydrogen in 1992 and dedicated significant resources to FCEV development throughout the 2000s, wavering on fuel cells for use in passenger vehicles, where does the future of the technology lie?

Given hydrogen’s potential in long-range transport, momentum still exists for its deployment in larger vehicles. Several companies are already working on hybrid hydrogen-electric powertrains for use in aviation, for instance.

One of them is ZeroAvia, which in 2020 achieved the first fully hydrogen-powered flight for a commercial-size aircraft. The company has since announced its plans to construct a research-and-development site just north of Seattle.

Recent investment has also been funneled toward the development of hydrogen-fueled cargo ships, trains, trucks and ambulances.

And still, despite automakers such as Honda, Mercedes-Benz and GM ending or modifying their hydrogen fuel cell programs, Toyota continues to hold out some hope. The company released its revamped Mirai just over a year ago, and is working in tandem with BMW to develop the drive train for that company's i Hydrogen NEXT, slated for a small-series presentation late this year. 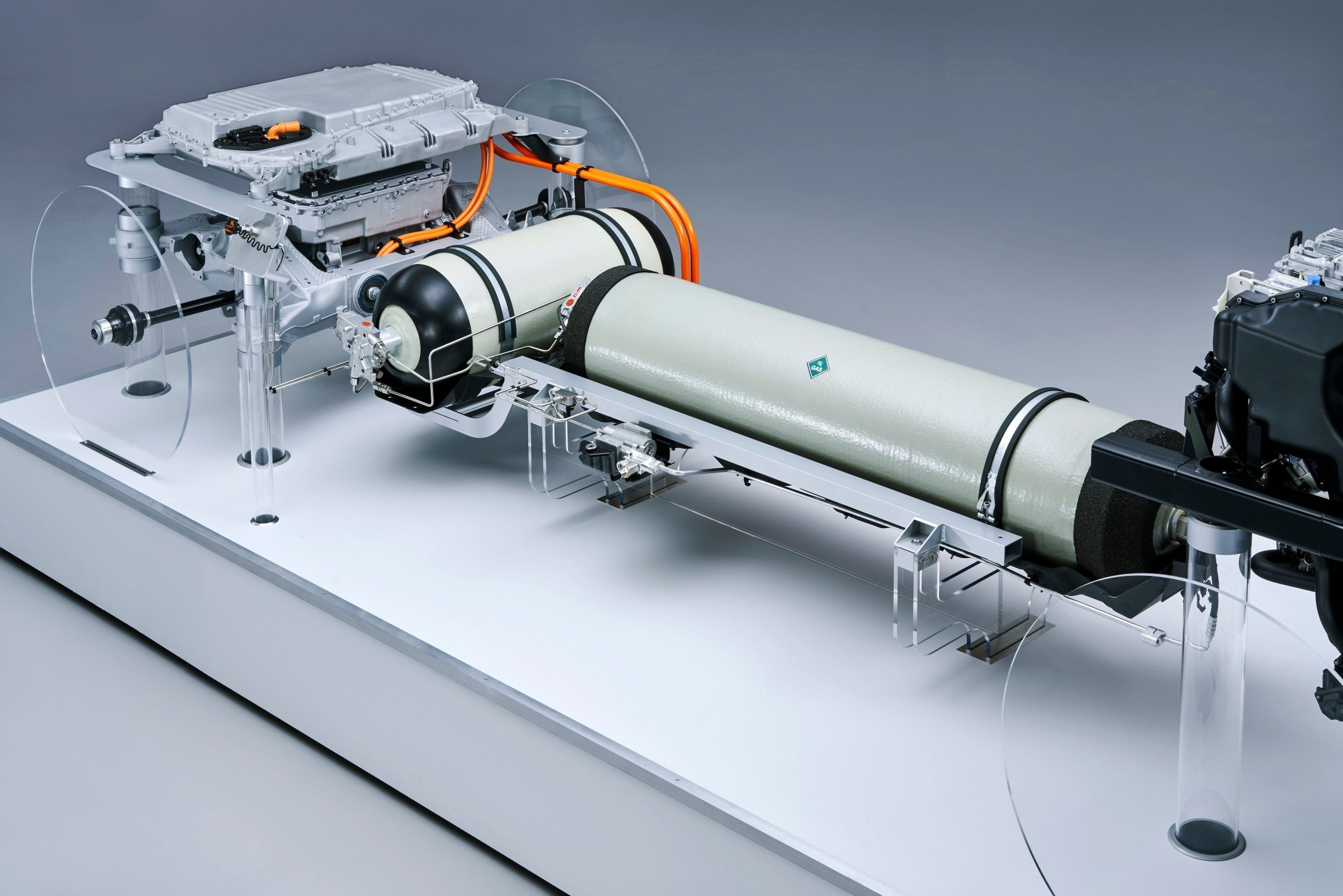 As a result, despite its ostensible stall in passenger vehicles, the market for hydrogen fuel cell technology is expected to continue to grow. In February, projection firm Global Market Insights predicted that its expansion would surpass $8.67 billion by 2030.