A developer and supplier of sustainable power generation solutions, EODev, recently jointly announced a distribution agreement with generator and power equipment manufacturer Generac Power Systems, Inc. The latter company will help EODev distribute its emissions-free hydrogen fuel cell power generator to customers in North America. For Generac and EODev, the agreement cements their ambitions to serve as proponents of the energy transition and lead the way towards a smarter, greener future for all. 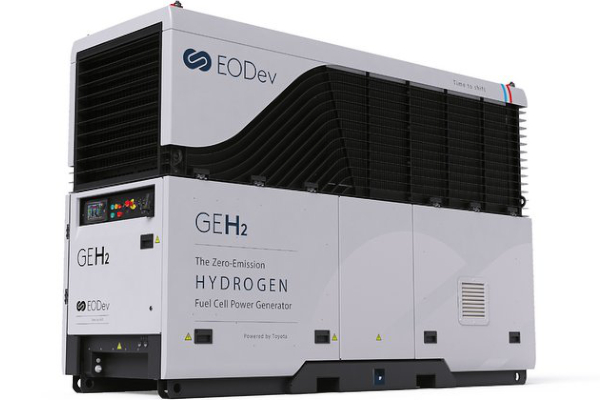 The Paris Agreement applies the principles of sustainable development to reduce global warming and aims to strengthen the response to climate change in all countries and all sectors of society.

One primary goal of the agreement is to limit the increase in global average temperature to 1.5 °C above pre-industrial levels. To do so requires lower carbon emissions, which also means that the world and its industry must switch to alternative non-fossil fuel-based sources of energy.

The energy transition is the process of switching from one form of energy to another. Companies like EODev and Generac are helping to decrease society’s dependency on fossil fuels by using renewable energy like solar and wind, which in this case, is hydrogen.

Hydrogen fuel cells are an emerging technology for the power generation industry. They are considered to be environmentally friendly, efficient, and sustainable.

A hydrogen fuel cell power generator is a device that converts chemical energy into electrical energy for use in various applications. Fuel cells are a promising alternative to traditional means of generating electricity because they emit no pollutants or greenhouse gases and can be used to generate electricity from many types of fuels, including natural gas, gasoline, diesel, and hydrogen.

Enedis experiments with EODev’s GEH2 to validate the integrity of power supply to homes during power outages. Video used courtesy of EODev

The GEH2 does not emit carbon dioxide (CO2), nitrogen oxides (NOx), hydrocarbons (HC), or other fine particulates. The generator only releases filtered air and warm water. EODev believes its solution is suitable for any sector seeking a backup power source, energy autonomy, or aiming to provide zero-emissions power generation in regulated zones or work in a confined space.

Generac will provide customers with the support required to purchase, install, and service the GEH2 units. The company has placed its first order for the units, some of which have reached the U.S. The GEH2 is produced in Montlhéry, France, on an industrial site owned by EODev’s partner, Eneria.

For Generac, this agreement stands in tow with its strategic endeavor of Powering a Smarter World. The idea is to help provide an alternative source of energy that can satisfy customers’ need for power while safeguarding the needs of the planet.

Generac and EODev are aligned in their ambition to push forward the energy transition and aim to bring North America a low-noise and carbon-free power generation solution which can help do just that.