The SSB pack built by PLG is based on three generations of SSB technologies which PLG have developed over the years. The 1st-generation technology is represented by lithium ceramic battery, which replaced the explosive liquid/jelly type polymer electrolyte with oxide ceramic electrolyte that greatly improved the battery's stability as well as safety, making possible the use of highly active anode/cathode materials to create high energy density SSB.

The 2nd-generation technology, the BiPolar+, announced in 2018, achieved another global industry breakthrough that allows simultaneous stacking of pieces of inlays (combination of cathode/electrolyte/anode) in both series and parallel inside one single cell package to create high energy battery cell with voltage of 60V or higher. This reduces the number of battery cells needed in single modules, and simplifies BMS (battery management system) at the module level.

The 3rd-generation technology is the "BiPolar+ 3D Structure Solid-State EV Battery Pack", announced as the CES Innovation Award winner. This new technology revolutionized the composition of EV batteries on both the cell and pack levels.

PLG's goal in battery pack design is to achieve maximum pack energy density by increasing the weight/volume proportion of battery cells in the overall battery pack, and by reducing the proportion of those other parts that do not directly produce energy.

These protective systems usually take up 47~63% of the conventional battery pack's overall volume/weight, resulting in correspondingly low proportion of cells in the pack (37% to 53%). In contrast, with PLG's battery pack technology, the proportion of cells in a pack can now exceed 79%. This substantial increase in cell utilization rate is attributable to two factors:

In addition to the PLG BiPolar+ technology which enables the stacking of inlay pieces in series and parallel simultaneously inside single cells, PLG made yet another major breakthrough by achieving the series/parallel simultaneousness both vertically and horizontally at the same time to significantly increase space utilization rate, creating big cells that attain even higher voltage and energy (85.2V, 20KWh), and only 4 cells are needed to make an 80KWh EV battery pack. 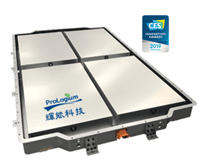 Compared with Tesla Model 3's battery pack that require 4,416 cells to achieve similar functions, PLG's lead is in the magnitude of elevated dimensions. This dramatic reduction in cell number enables PLG to adopt simple BMS, save packaging & connecting material between cells, increase energy density of the battery pack, and reduce cost of materials.

Moreover, the PLG cell is the world-only with a built-in heat dissipation system filling the room between serial inlays with thermal conductive gel to evenly conduct heat outside cell's aluminum housing. In addition, liquid cooling tubes are installed on one side of cells to achieve excellent thermal management. This greatly simplified cooling system can save 20~50% of pack space.

6 years ago, PLG was the first in the world to achieve mass production of SSB.  And today, while PLG is still the world's-only that has ever possessed the SSB mass production capability, this time it shocked the entire industry again with breakthroughs beyond the cell level - the PLG EV battery pack - a new horizon of pack mechanical design tailored for SSB, which has achieved the goal of low-cost electric vehicle with high energy density batteries.

The pack technology has been introduced to and are now tested by EV makers in the U.S., Europe, China, and Japan. Currently, PLG is engaged in in-depth cooperation discussions with a European auto giant. It is expected that the first EV powered by "BiPolar+ 3D Structure Solid-State EV Battery Pack" may make its debut by as early as  2019.