In a paper published in the journal Nano Energy, researchers from the University of Glasgow’s Bendable Electronics and Sensing Technologies (BEST) group describe how they have developed a promising new type of graphene supercapacitor, which could be used in the next generation of wearable health sensors.

Currently, wearable systems generally rely on relatively heavy, inflexible batteries, which can be uncomfortable for long-term users. The BEST team, led by Professor Ravinder Dahiya, have built on their previous success in developing flexible sensors by developing a supercapacitor which could power health sensors capable of conforming to wearer’s bodies, offering more comfort and a more consistent contact with skin to better collect health data.

Their new supercapacitor uses layers of flexible, three-dimensional porous foam formed from graphene and silver to produce a device capable of storing and releasing around three times more power than any similar flexible supercapacitor. The team demonstrated the durability of the supercapacitor, showing that it provided power consistently across 25,000 charging and discharging cycles.

They have also found a way to charge the system by integrating it with flexible solar powered skin already developed by the BEST group, effectively creating an entirely self-charging system, as well as a pH sensor which uses wearer’s sweat to monitor their health. 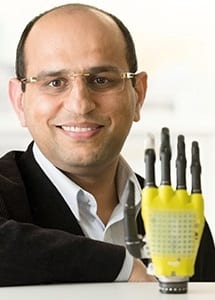 Professor Dahiya said: “We’re very pleased by the progress this new form of solar-powered supercapacitor represents. A flexible, wearable health monitoring system which only requires exposure to sunlight to charge has a lot of obvious commercial appeal, but the underlying technology has a great deal of additional potential.

“This research could take the wearable systems for health monitoring to remote parts of the world where solar power is often the most reliable source of energy, and it could also increase the efficiency of hybrid electric vehicles. We’re already looking at further integrating the technology into flexible synthetic skin which we’re developing for use in advanced prosthetics.”

The research was funded by the Engineering and Physical Sciences Research Council (EPSRC) and Scottish Funding Council (SFC). The team’s paper, titled ‘Flexible Self-Charging Supercapacitor Based on Graphene-Ag-3D Graphene Foam Electrodes’, is published in Nano Energy.

Abstract from paper in Nano Energy

A flexible three-dimensional porous graphene foam-based supercapacitor (GFSC) is presented here for energy storage applications. With a novel layered structure of highly conductive electrodes (graphene-Ag conductive epoxy–graphene foam), forming an electrochemical double layer, the GFSC exhibits excellent electrochemical and supercapacitive performance. At a current density of 0.67 mA cm−2, the GFSCs show excellent performance with areal capacitance (38 mF cm−2) about three times higher than the values reported for flexible carbon-based SCs. The observed energy and power densities (3.4 µW h cm−2 and 0.27 mW cm−2 respectively) are better than the values reported for carbon-based SCs. Analyzed under static and dynamic bending conditions, the GFSCs are stable with up to 68% capacitance retention after 25000 charge–discharge cycles. The light-weight, cost-effective fabrication and no self-heating make the GFSCs a promising alternative to conventional source of energy in the broad power density ranging from few nW cm−2 to mW cm−2. In this regard, GFSC was integrated with a flexible photovoltaic cell resulting in a flexible self-charging power pack. This pack was successfully utilized to power continuously a wearable CuO nanorod based chemi-resistive pH sensor.