It might be appealing to power electric vehicles with onboard solar panels, but is it practical?

It seems like such a good idea—to use solar panels attached to an electric vehicle (EV) to produce the electricity needed to drive it.

An average sport-utility vehicle is about 4.5 meters long and 2 meters wide, so it has a surface area of approximately 9 square meters. The amount of the sun’s energy that reaches the earth (at sea level) is about 1,000 watts (or 1 kilowatt) per square meter. If we could convert all that solar energy into electricity, producing 9 kilowatts per hour from pure solar energy would make it possible to charge a 90 kilowatt-hour (kW-hr) lithium-ion battery in about 10 hours if parked in direct sunlight. 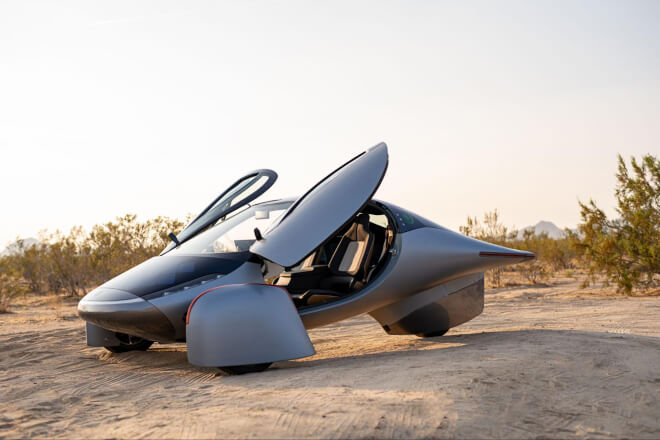 Efficiency is the Issue

As appealing as this might be, unfortunately, it isn’t that simple—the photovoltaic (PV) solar cells that convert light into electricity have an efficiency of around 22 percent. During 10 hours of sunlight charging, the most our 9 square meters of PV cells can produce would be about 19 kWh—about enough for the average electric SUV to travel about 60 miles. Admittedly, distance is still less than most people commute each day, but to achieve even this modest result would require the entire surface of the SUV to be covered with PV solar panels.

If it isn’t practical to use on-onboard solar energy to power the average SUV, how about building something smaller and lighter?

There are presently three companies proposing to build lightweight solar-powered commuter cars that take advantage of light materials and highly aerodynamic shapes to make use of the relatively small amounts of solar energy that can be harvested using PV cells.

Aptera Motors got its start with the design of a three-wheel electric vehicle in 2006. After initial optimism and redesign, the company was re-established in 2019 to build lightweight and aerodynamic vehicles primarily powered by the sun.

The key to the Aptera three-wheeler is its high energy efficiency—according to the company, the lightweight commuter is expected to consume just 100 watts per mile compared to around 300-400 watts per mile for a more typical full-size EV.

The Aptera has an extremely low 0.13 aerodynamic drag coefficient and, with its small 25 kWh battery pack, is reported to achieve up to 250 miles of range (at a rate of 100 watts per mile). With its largest 100 kWh battery pack, Aptera claims a range of 1,000 miles on a single charge.

Then you can add in a 3 square meter “never charge solar array” that Aptera claims produces 700 watts and can add up to 40 miles per day. Let’s see, that 3 square meters can produce about 660-700 watts using present PV technology at 22% efficiency, so over a 10-hour day in bright sunlight, it should be possible to store between 6.6 and 7 kWh. If the Aptera uses just 100 watts per mile as claimed for the battery version, then the solar range should be between 66 and 70 miles per day.

But the company claims that up to 40 miles can be added through solar charging, so there is some disagreement between the claimed range of the Aptera on batteries charged from the grid (100 watts/mile) versus those charged by its onboard solar panels (175 watts/mile). The company also claims that an additional 24 miles per day can be added when solar panels are also fitted to the vehicle’s hood and rear hatch.

A slightly more conventional vehicle, albeit one that is also solar-powered, is the Dutch-designed Lightyear 0 solar car. The four-door, four-wheel car has a 60 kWh onboard battery pack that can provide up to 388 miles of range, according to European testing.

Lightyear claims the highly aerodynamic (drag coefficient less than 0.2) vehicle has an efficiency of 169 watts per mile. This is helped by using rear-view cameras instead of mirrors. It also can charge using a 1.05 kW solar array that can add 6.2 miles of range per hour of charging on a sunny day. 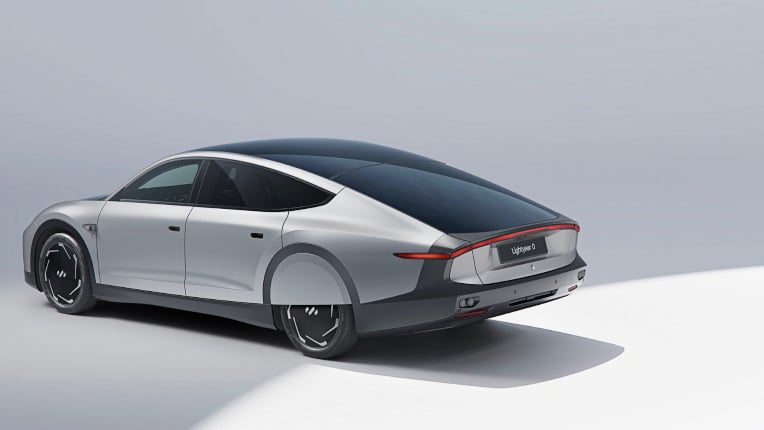 Lightyear will have its solar car built in Finland by Valmet Automotive, with an initial production of 150 cars scheduled for the end of 2022. The price for the Lightyear 0 is an eye-watering $263,000.

Another solar car from Europe, which will also coincidentally be assembled in Finland by Valmet, is the Sono Sion.

This German-designed four-door, four-wheel hatchback mini car has a 54 kWh lithium-iron-phosphate (LFP) battery pack that can provide a range of up to 189 miles (European testing) with an efficiency of 286 watts per mile. The Sion has solar cells embedded in the roof, both sides, and the hood. Sono claims that solar can add on average, about 70 miles of range per week (and as much as 152 miles per week at a maximum). 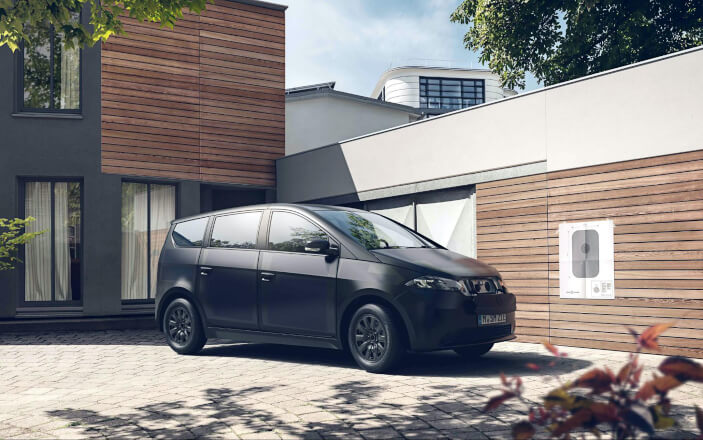 Founded in 2016, in addition to the Sion, Sono is making a name for itself in Europe by designing solar-powered refrigeration systems for trucks to replace traditional diesel systems.

Production of the Sono Sion in Finland is expected to start in 2023, with an expected first-year run of 43,000 cars. Pre-orders in Europe are available for around $30,000, but there are no announced plans at present for the Sion to come to the US.

The Real Value of Solar

The real question is whether adding solar panels to an EV is worth it. Because of the relatively low efficiency of converting sunlight into electricity, the only way to achieve any reasonable range is with a small, light, and aerodynamically efficient vehicle. But the smaller you make the EV, the less space there is for PV solar panels; therefore, less electricity can be produced.

In Europe, ridiculously small mini cars with a limited range might be acceptable, but US drivers like large-scale SUVs and pickup trucks and traditional car makers and startups are scrambling to build EVs in jumbo sizes for US buyers. Aside from small solar panels that can help power accessories when the EV is parked, it’s hard to see how else onboard solar will be practical at the present levels of PV efficiencies.

There is an important use of solar energy for charging EVs, however. Grid-scale and distributed solar power parks can be used to generate electricity that can be stored in energy storage systems (ESS) and then used to charge EVs through the power grid or through home-based systems.

Globally, the solar market was valued at $197 billion in 2021 and is expected to reach $370 billion by 2030 as zero-emission renewable energy replaces fossil fuels like coal and natural gas. Solar has a big part to play in the electrification of transportation, even if the solar panels aren’t always along for the ride.