Samsung Trails Behind Apple in Guide to Greener Electronics

Samsung Trails Behind Apple in Guide to Greener Electronics

Average Grade Across 17 Companies Is D+, Indicating Long Way to Go Toward Sustainable IT

The 2017 Guide to Greener Electronics (the Guide) was released today by Greenpeace USA, with rankings of seventeen of the world's leading consumer electronics companies on sustainable manufacturing and design of IT products.

Companies were evaluated based on their transparency, commitment, performance and advocacy efforts in three critical areas: reduction of greenhouse gases through renewable energy; use of recycled materials; and elimination of hazardous chemicals.

"Tech companies claim to be at the forefront of innovation, but their supply chains are stuck in the Industrial Age. We know they can change. Rather than fueling climate change, IT companies need to show the way forward, just like Google and Apple have done with data centers run on renewables," said Gary Cook, Senior IT Campaigner at Greenpeace USA.

The average grade across the 17 companies evaluated in the Guide was a D+, demonstrating that the sector as a whole has work to do to resolve supply chain impacts and improve product design.

Fairphone, based in the Netherlands, scored best overall with a B, followed by Apple with a B-. Dell and HP follow Apple and Fairphone with a C+, while eleven companies, including Samsung, Huawei and Amazon, fall in the D and F range.

The full list of rankings can be found here. 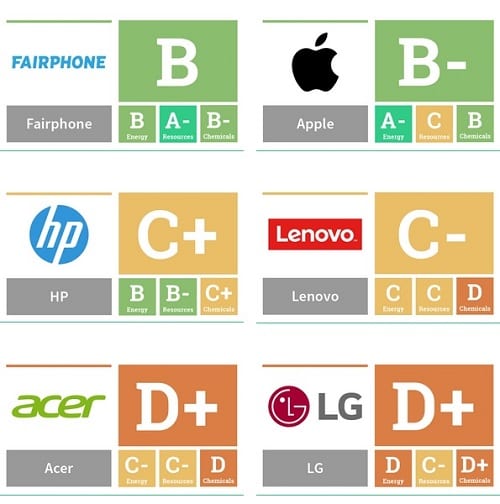 Despite its central position as both the largest manufacturer of smartphones and one of the largest suppliers of displays, Samsung's manufacturing system relies heavily on fossil fuels. The company used more than 16,000GWh of energy in 2016, with just 1% coming from renewables, for example.

Demand for consumer electronics continues to climb, with nearly 2 billion devices sold in 2016 alone. This drives demand for both finite mined materials and dirty energy.

Meanwhile, e-waste is growing, due in part to the short lifespans of devices. The UN has estimated that e-waste globally will surpass 65 million tons in 2017--enough to bury San Francisco to 14 feet.

Key findings of the 2017 Guide to Greener Electronics include:

"It is clear the impacts of the linear take-make-waste business model employed by device manufacturers extend beyond the concerns of e-waste. We need to see greater ambition, more transparency, and follow-through from companies to address the environmental impacts of their enormous supply chains. The current model cannot be maintained," said Cook.

Greenpeace is challenging the IT sector to take responsibility for its rapidly increasing footprint on the planet by: