Researchers from the University of Michigan’s Kotov lab developed a new, rechargeable zinc battery that may pave the way to distributed energy storage.

Researchers from the University of Michigan (U-M) have created a new form of battery that mimics the function of fat reserves found in humans and other animals. Like fat reserves, the new rechargeable zinc batteries integrate into the structure or body of a robot and provide energy when required.

The research team led by Nicholas Kotov, researcher, and Joseph B. and Florence V. Cejka professor of engineering at the University of Michigan developed the zinc battery and provided a new perspective on distributed energy storage following organismal biology.

Lithium-ion batteries are one of the main-stays in the battery space. They have a high energy density, voltage capacity, and lower self-discharge rate than other rechargeable batteries. The greater power and compact, lightweight nature of these batteries is also coveted. Lithium-ion batteries can last much longer between charges compared to other batteries on the market all the while maintaining a high level of performance.

The disadvantage of using lithium-ion includes the presence of toxic chemical components of which they are constituted. Researchers have long endeavored to find another alternative to lithium.

The new zinc battery works by passing hydroxide ions between a zinc electrode and the air side through an electrolyte membrane. The membrane is a composite of non-toxic, abundant, and cheap materials including zinc.

Carbon-based (aramid) fibers found in kevlar vests form a network and a new water-based polymer gel enables the transfer of hydroxide ions between the electrodes. The team wishes to upcycle such materials from body armor like kevlar vests. This is a more sustainable practice for battery development.

While zinc-based batteries are yet to meet the high capacity and longer cycle time exhibited by lithium-ion batteries, they are considered less flammable. The aramid nanofibers and gel will not catch fire if the battery is damaged, unlike lithium batteries.

First author and postdoctoral researcher at the Chinese Harbin Institute of Technology and visiting researcher to Kotov’s lab, Mingqiang Wang provided her view on zinc batteries in a recent news release saying, “We estimate that robots could have 72 times more power capacity if their exteriors were replaced with zinc batteries, compared to having a single lithium-ion battery.”

Although the energy density capable of LIBs has been top-mark, Prof Kotov and his team improved prior versions of the zinc battery to make it better. 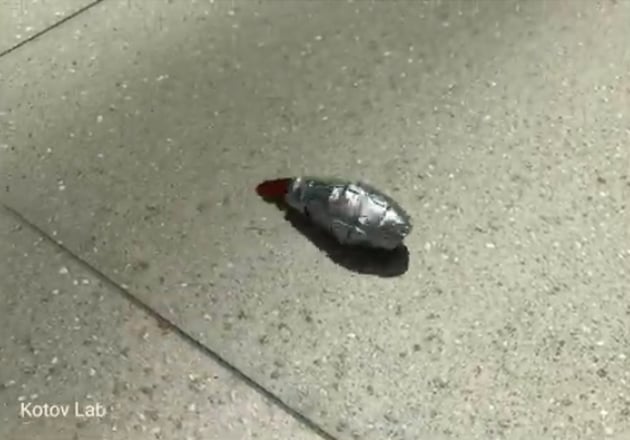 Designs for robots usually entail using a battery that takes up 20% or more space, and can sometimes equate to being the same weight. This is inefficient and cumbersome when considering microscale or even smaller robots.

The lab’s zinc battery could “do double duty — to store charge and protect the robot’s ‘organs’ — replicate the multifunctionality of fat tissues serving to store energy in living creatures,” said Ahmet Emre, a doctoral student in biomedical engineering in Kotov’s lab.

Researchers experimented with small robots in the form of a worm and a scorpion. Replacing the original batteries with zinc air cells, the team wired the cells to the motors and wrapped them around the outside of the little bots.

Kotov believes that the zinc battery design may be a cornerstone to the transition of single battery to distributed energy storage and may provide the best way forward in terms of creating highly efficient biomorphic devices.