Perovskites are a family of crystals that show promising properties for applications in nano-technology. However, one useful property that until now was unobserved in perovskites is so-called carrier multiplication – an effect that makes materials much more efficient in converting light into electricity.

New research, led by physicists Dr Chris de Weerd and Dr Leyre Gomez from the group of Prof. Tom Gregorkiewicz at the University of Amsterdam Institute of Physics (UvA-IoP), has now shown that certain perovskites in fact do have this desirable property. A sample of the material studied is pictured above.

Crystals are configurations of atoms, molecules or ions, that are ordered in a structure that repeats itself in all directions. We have all encountered some crystals in everyday life: ordinary salt, diamond and even snowflakes are examples. What is perhaps less well-known is that certain crystals show very interesting properties when their size is not that of our everyday life but that of nanometers – a few billionths of a meter. There, we enter the world of nanocrystals, structures that have shown to be extremely useful in constructing technological applications at tiny scales.

Perovskites – named after 19th century Russian mineralogist Lev Perovski – form a particular family of materials that all share the same crystal structure. These perovskites have many desirable electronic properties, making them useful for constructing for example LEDs, TV-screens, solar cells and lasers. For this reason, the perovskites have been studied extensively by physicists in the past years.

A property which so far had not been shown to exist in perovskites is carrier multiplication. When semiconductors – in solar cells, for example – convert the energy of light into electricity, this is usually done one particle at a time: a single infalling photon results in a single excited electron (and the corresponding ‘hole’ where the electron used to be) that can carry an electrical current. However, in certain materials, if the infalling light is energetic enough, further electron-hole pairs can be excited as a result; it is this process that is known as carrier multiplication.

When carrier multiplication occurs, the conversion from light into electricity can become much more efficient. For example, in ordinary solar cells there is a theoretical limit (the so-called Shockley-Queisser limit) on the amount of energy that can be converted in this way: at most a little over 33% of the solar power gets turned into electrical power. In semiconductor nanocrystals that feature the carrier multiplication effect, however, a maximum efficiency of up to 44% is predicted. 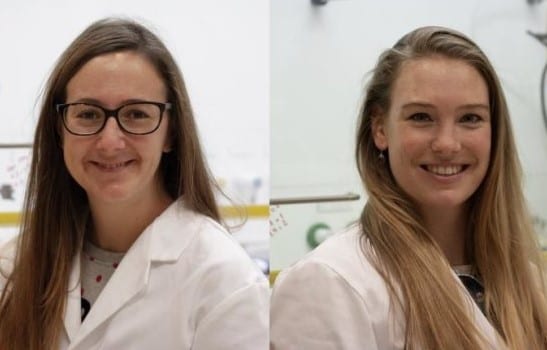 This makes it very interesting to search for the carrier multiplication effect in perovskites as well, and that is precisely what UvA-IoP physicists Chris de Weerd and Leyre Gomez from the Optoelectronic Materials group led by Prof. Tom Gregorkiewicz, in collaboration with the group of Prof. Yasufumi Fujiwara and with support of their colleagues from the AIST National Institute in Tsukuba and the Delft University of Technology have now done.

Using spectroscopy methods – studying the frequencies of the radiation that comes from a material after very briefly illuminating it with a flash of light – the researchers showed that perovskite nanocrystals made out of cesium, lead and iodine, do indeed display carrier multiplication. Moreover, they argue that the efficiency of this effect is higher than reported thus far for any other materials; with this finding therefore, the extraordinary properties of perovskites receive a new boost.

De Weerd, who successfully defended her PhD thesis based on this and other research, said: “Until now, carrier multiplication had not been reported for perovskites. That we have now found it is of great fundamental impact on this upcoming material. For example, this shows that perovskite nanocrystals can be used to construct very efficient photodetectors, and in the future perhaps solar cells.”