A common greenhouse gas could be repurposed in an efficient and environmentally friendly way with an electrolyzer that uses renewable electricity to produce pure liquid fuels. The catalytic reactor developed by the Rice University lab of chemical and biomolecular engineer Haotian Wang uses carbon dioxide as its feedstock and, in its latest prototype, produces highly-purified and high concentrations of formic acid.

The schematic above shows the electrolyzer developed at Rice University to reduce carbon dioxide, a greenhouse gas, to valuable fuels. At left is a catalyst that selects for carbon dioxide and reduces it to a negatively charged formate, which is pulled through a gas diffusion layer (GDL) and the anion exchange membrane (AEM) into the central electrolyte. At the right, an oxygen evolution reaction (OER) catalyst generates positive protons from water and sends them through the cation exchange membrane (CEM). The ions recombine into formic acid or other products that are carried out of the system by deionized (DI) water and gas. (Credit: Illustration by Chuan Xia and Demin Liu /Rice University)Long Description

Wang, who joined Rice's Brown School of Engineering in January, and his group pursue technologies that turn greenhouse gases into useful products. In tests, the new electrocatalyst reached an energy conversion efficiency of about 42%. That means nearly half of the electrical energy can be stored in formic acid as liquid fuel.

"Formic acid is an energy carrier," Wang said. "It's a fuel-cell fuel that can generate electricity and emit carbon dioxide — which you can grab and recycle again. 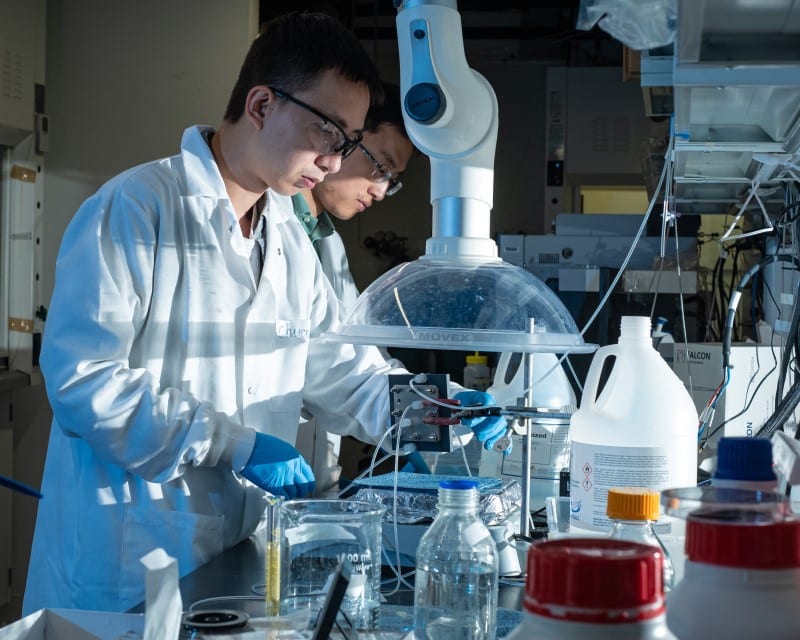 "It's also fundamental in the chemical engineering industry as a feedstock for other chemicals, and a storage material for hydrogen that can hold nearly 1,000 times the energy of the same volume of hydrogen gas, which is difficult to compress," he said. "That's currently a big challenge for hydrogen fuel-cell cars."

Two advances made the new device possible, said lead author and Rice postdoctoral researcher Chuan Xia. The first was his development of a robust, two-dimensional bismuth catalyst and the second a solid-state electrolyte that eliminates the need for salt as part of the reaction.

"Bismuth is a very heavy atom, compared to transition metals like copper, iron or cobalt," Wang said. "Its mobility is much lower, particularly under reaction conditions. So that stabilizes the catalyst." He noted the reactor is structured to keep water from contacting the catalyst, which also helps preserve it. 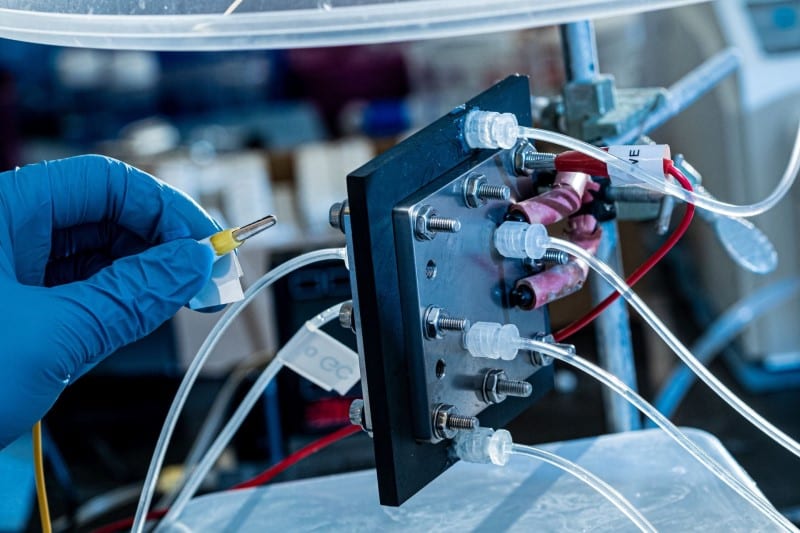 An electrocatalysis reactor built at Rice recycles carbon dioxide to produce pure liquid fuel solutions using electricity. The scientists behind the invention hope it will become an efficient and profitable way to reuse the greenhouse gas and keep it out of the atmosphere. Photo by Jeff Fitlow

Xia can make the nanomaterials in bulk. "Currently, people produce catalysts on the milligram or gram scales," he said. "We developed a way to produce them at the kilogram scale. That will make our process easier to scale up for industry."

The polymer-based solid electrolyte is coated with sulfonic acid ligands to conduct positive charge or amino functional groups to conduct negative ions. "Usually people reduce carbon dioxide in a traditional liquid electrolyte like salty water," Wang said. "You want the electricity to be conducted, but pure water electrolyte is too resistant. You need to add salts like sodium chloride or potassium bicarbonate so that ions can move freely in water.

"But when you generate formic acid that way, it mixes with the salts," he said. "For a majority of applications you have to remove the salts from the end product, which takes a lot of energy and cost. So we employed solid electrolytes that conduct protons and can be made of insoluble polymers or inorganic compounds, eliminating the need for salts."

The rate at which water flows through the product chamber determines the concentration of the solution. Slow throughput with the current setup produces a solution that is nearly 30% formic acid by weight, while faster flows allow the concentration to be customized. The researchers expect to achieve higher concentrations from next-generation reactors that accept gas flow to bring out pure formic acid vapors.

The Rice lab worked with Brookhaven National Laboratory to view the process in progress. "X-ray absorption spectroscopy, a powerful technique available at the Inner Shell Spectroscopy (ISS) beamline at Brookhaven Lab's National Synchrotron Light Source II, enables us to probe the electronic structure of electrocatalysts in operando — that is, during the actual chemical process," said co-author Eli Stavitski, lead beamline scientist at ISS. "In this work, we followed bismuth's oxidation states at different potentials and were able to identify the catalyst's active state during carbon dioxide reduction."

With its current reactor, the lab generated formic acid continuously for 100 hours with negligible degradation of the reactor's components, including the nanoscale catalysts. Wang suggested the reactor could be easily retooled to produce such higher-value products as acetic acid, ethanol or propanol fuels.

"The big picture is that carbon dioxide reduction is very important for its effect on global warming as well as for green chemical synthesis," Wang said. "If the electricity comes from renewable sources like the sun or wind, we can create a loop that turns carbon dioxide into something important without emitting more of it."

Rice and the U.S. Department of Energy Office of Science User Facilities supported the research.