Power electronics companies are unveiling their second-quarter earnings. Here’s a review of the results from four market players.

Power electronics firms are closing their second quarter strong, with some posting earnings at record highs. Here’s a look at the earnings results from four companies of different sizes in the market:

Semiconductor giant Texas Instruments reported $4.58 billion in revenues over the second quarter, up 7% from last quarter and 41% from this time last year. TI President and CEO Rich Templeton cited “strong demand in industrial, automotive, and personal electronics” as sales drivers for the quarter.

Revenue in TI’s core analog business increased 6%, while embedded processing revenues grew 2% from last quarter—marking an annual increase of 42% and 43%, respectively, from the second quarter of last year. 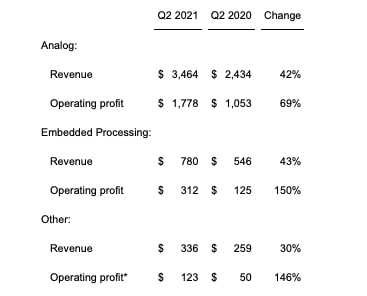 Texas Instruments’ segment results from the second quarter of 2021 (in millions). Image courtesy of TI

To cope with increased semiconductor demand, TI is continuing to add incremental capacity expansions this year and in the first half of 2022. RFAB2, its third 300-millimeter wafer fab, is expected to open in the second half of next year. The company recently acquired Micron's 300-millimeter fab in Lehi, Utah, for $1.5 billion. The facility will be the fourth 300-millimeter fab in its manufacturing operations.

These moves are part of TI’s long-term capacity planning process, building up its inventory to cope with the global chip shortage. The company has also invested $1.6 billion into research and development over the last 12 months.

However, in the earnings call, company leaders sought to dispel concerns over chip supply shortages, noting that the automotive market segment more than doubled from a year ago.

Rafael Lizardi, TI’s CFO and senior vice president of finance and operations, also stated in the earnings call, “We continue to believe that our competitive advantage of manufacturing and technology will be of growing importance in owning and controlling our supply chain.”

Power Integrations, a smaller player in the market, broke records this quarter with $180.1 million in revenue, up 4% from last quarter and 69% year-over-year. Its net income for the quarter totaled $41.9 million.

The California-based company provides analog and mixed-signal ICs and other electronic components for high-voltage power conversion applications. Power Integrations President and CEO Balu Balakrishnan stated in the announcement that the company’s sales growth “reflects significant market-share gains and the impact of secular trends such as energy efficiency, electrification, advanced charging for mobile devices, and smarter homes, buildings, and appliances.”

In the earnings call, Balakrishnan further pointed to larger market trends underpinning the company’s quarterly performance. In the energy efficiency market, OEMs are redesigning their products to respond to regulatory standards and consumer demands, creating new opportunities for Power Integrations’ already-leading position in the market for switched-mode power supplies for air conditioners.

This quarter, Power Integrations’ largest share of revenue was claimed by its communications segment, with a 35% share of the pie. Its consumer segment claimed 31%, industrial claimed 26%, and computer segment sales claimed 8% of quarterly revenue.

In the earnings call, Balakrishnan noted that combined revenues in the communications and computer categories more than doubled since the second quarter of last year, reflecting the company’s current market share in OEM-branded chargers for smartphones, tablets, notebooks, and multi-purpose chargers from aftermarket brands. The demand for advanced chargers for mobile devices continues to drive growth in these categories, Balakrishnan added.

Switzerland-based STMicroelectronics is one of the largest semiconductor manufacturers globally, with over 46,000 employees, more than 10 manufacturing locations and 80-plus sales and marketing offices worldwide. The company recently manufactured its first 200mm Silicon Carbide bulk wafers at its site in Sweden, a transition aiming to boost capacity for demand in the automotive and industrial sectors.

The company reported net revenues of $2.99 billion in the second quarter, bringing its total for the first half of the year to just over $6 billion. Its revenue rose 43.4% from the second quarter of last year, while its half-year total marks a 39.1% increase.

Revenue increased across all of its product groups except radio frequency communications. 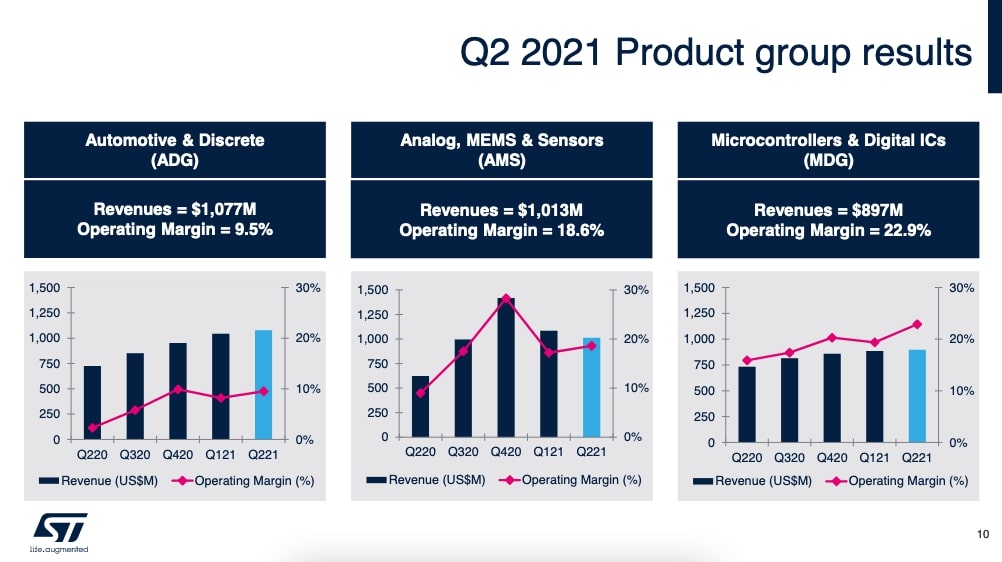 A slide from STMicroelectronics’ presentation to investors in July. Image courtesy of ST

In the earnings call, STMicroelectronics President and CEO Jean-Marc Chery mentioned automotive bookings remained strong through the quarter, with demand still “well above our current and planned manufacturing capacity.” Bookings now cover about 18 months of demand.

The company recently announced a strategic agreement with Renault Group to supply advanced power semiconductors for electric and hybrid vehicles. Chery said the company will benefit from “significant volumes of these power modules and wide bandgap power transistors from 2026 to 2030.”

He added that the company has 81 ongoing SiC engagements, with 68 customers spread across its industrial and automotive segments. It’s increasing its manufacturing capacity for SiC products across its production sites.

ST is expecting $3.20 billion in revenue next quarter, up 20% year-over-year and 7% from the second quarter.

The California-based developer of lithium-ion battery safety and thermal management systems reported $620,000 in revenue for the quarter, up more than 200% year-over-year and bringing its half-year total to just over $1 million.

KULR provides thermal management solutions mainly for aerospace and defense applications, with key customers being NASA, the Department of Defense, and other government agencies. After establishing itself as a trusted name for federal agencies, KULR is now expanding in the electric vehicles, energy storage, infrastructure, and computing markets.

In the announcement, KULR CEO Michael Mo stated he’s expecting strong revenue growth for the rest of the year as the company continues building out its management team for mass-market applications and scaled-up manufacturing.

“Our attention to targeting adjacent markets complementary to our established battery safety and thermal management products, such as recycling and end of battery life shipment logistics, is starting to show traction,” Mo added.

KULR recently received Department of Transportation special permits to transport damaged, defective, or recalled batteries and prototype lithium cells and batteries for commerce. This opens up a new range of regulatory markets across shipping and end-of-life battery management. Mo says he’s expecting increased market penetration in subsequent quarters as a result of obtaining the DoT permits.