Scientists have developed a pioneering new technique that could unlock new methods of making solar energy more efficient. A team of experts from the University of Exeter has discovered an innovative way for generating photovoltaic (PV) energy – or ways in which to convert light into power.

The new technique relies on ‘funneling’ the sun’s energy more efficiently directly into power cells, such as solar panels or batteries.

Crucially, this ground-breaking method has the potential to harvest three times the energy compared with traditional systems. The researchers believe their breakthrough could result in solar panels, no bigger than a book, producing enough energy to power a family-sized house.

The results are published in the leading scientific journal, Nature Communications.

Adolfo De Sanctis, lead author of the paper and from the University of Exeter said: “The idea is similar to pouring a liquid into a container, as we all know it is much more efficient if we use a funnel. However, such charge funnels cannot be realized with conventional semiconductors and only the recent discovery of atomically thin materials has enabled this discovery.” 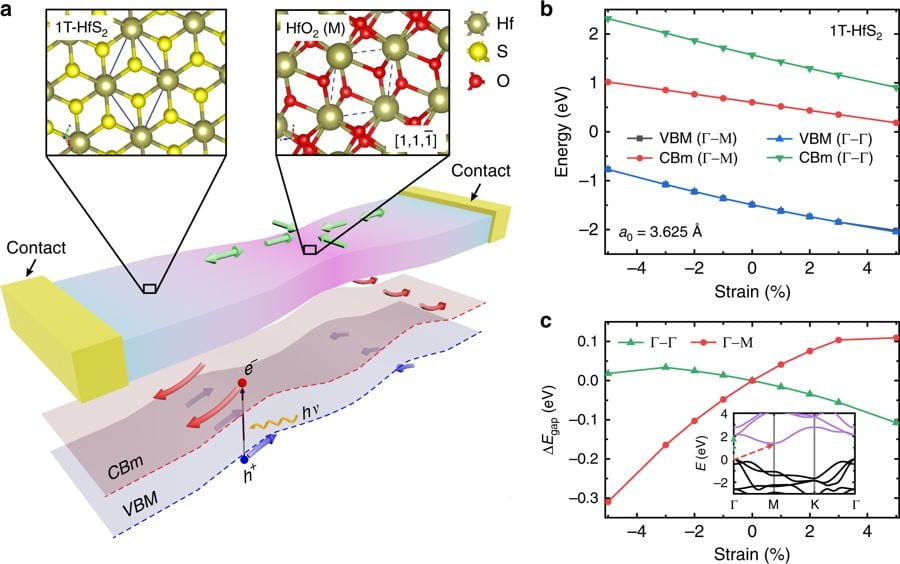 Inverse charge funnelling in strained HfS2. a Schematic diagram of the proposed device (see Fig. 4 for the actual implementation). Compressive strain is induced in the centre of a semiconducting HfS2 channel by controlled photo-oxidation. The compression induces tensile strain away from the HfS2/HfO2 interface, resulting in the spatial modulation of the bandgap. b Ab initio calculations of the valence band maximum (VBM) and conduction band minimum (CBm) of 1T-HfS2 as a function of strain in the Γ → Γ (direct gap) and Γ → M (indirect gap) directions. c Change in bandgap as a function of strain in the two directions, with respect to the unstrained bandgap (relaxed lattice constant a0 = 3.625 Å). Inset: calculated band structure of 1T-HfS2 (click on image to enlarge)

In the research, the team of physics experts developed how to ‘funnel’ electrical charge onto a chip. Using the atomically thin semiconductor hafnium disulphide (HfS2), which is oxidized with a high-intensity UV laser, the team were able to engineer an electric field that funnels electrical charges to a specific area of the chip, where they can be more easily extracted.

While current solar cells are able to convert into electricity around 20 per cent of the energy received from the Sun, the new technique has the potential to convert around 60 per cent of it by funneling the energy more efficiently.

“Manipulating the motion of charge carriers by means of an electric field has been a stepping stone in a wide range of sectors. From electronic circuits to synapses in neural cells, the electric field control over the dynamics of charges underpins a vast range of computing, storage, sensing, communication and energy harvesting tasks. For example, built-in electric fields generated at the interfaces between materials in vertical structures govern the extraction of photo-generated carriers in several photovoltaic and opto-electronic applications.

“Presently, the emergence of atomically thin materials and the development of new ways to tailor their electrical and optical properties, for example by local modification of their composition or structure, holds the promise to explore new implementations of electric fields and unveil novel mechanisms of charge transport which can boost the efficiency of opto-electronic devices.

“The application of strain is one way to engineer electric fields in semiconducting materials through a varying energy gap. However, common bulk semiconductors can only sustain strain of the order of ~0.1–0.4% without rupture, a value that limits the range of physical phenomena and applications that can be accessed. On the contrary, layered semiconductors, such as graphene and transition metal dichalcogenides (TMDs), are theoretically predicted to be able to sustain record high levels of strain >25% expected to lead to an unprecedented tunability of their energy gap by more than 1 eV.

“One tantalising charge transport phenomenon that could be accessible owing to large values of strain is the funnelling of photoexcited charges away from the excitation region and towards areas where they can be efficiently extracted. Such effect is heralded as a gateway for a new generation of photovoltaic devices with efficiencies that could approach the thermodynamic limit.

“In general, strain-induced gradients of energy gaps create a force on (neutral) excitons that pushes them towards the regions with the smallest energy gap. In direct gap semiconductors, this area corresponds to that of maximum tension. Hence, the strain pattern generated by simply poking a sheet of direct gap TMD would normally funnel the charges towards the apex of the wrinkle. Consequently, the extraction of the charges for energy harvesting or sensing poses considerable technological challenges and for this reason the funnelling effect has not yet been observed experimentally in electrical transport.

“On the other hand, the opposite behaviour is theoretically expected in some indirect gap semiconductors (e.g. HfS2 and HfSe2) and in black-phosphorus, where the energy gap increases in the regions of tension. This would allow the exploitation of the so-called inverse charge funnelling whereby a strain pattern generated by poking a sheet of these materials would push the charges away from the apex of the wrinkle, making them readily available for energy harvesting or computing purposes to an external circuit.

“In this work, we demonstrate the electrical detection of the inverse charge funnel effect using a photo-assisted oxidative method to attain deterministic and spatially resolved electric fields in ultra-thin HfS2. A 350% increase in the responsivity of strained devices compared to pristine structures demonstrates the efficient extraction of photogenerated carriers away from the excitation region. The bias dependence of the photocurrent shows that the measured signal is due to charge funnelling, enabled by the strain-engineered gradient of energy gap in the channel.

“Our complementary study of a wide range of experimental techniques (i.e. spatially resolved absorption and Raman spectroscopy, elemental analysis and atomic force microscopy (AFM)), together with analytical theoretical modelling and density functional theory (DFT) calculations, confirm that band tailoring by strain in TMDs is a gateway for the observation of novel microscopic charge transport phenomena.”