Every machine or engine on earth gives off heat as a byproduct, and humans are no exception. Indeed, the sources of waste heat may also include all the manner of human activities, natural systems, and all organisms. Then, what if there is a technology that can convert this overlooked renewable into electrical energy?

Professor Jae Sung Son and his research team in the School of Materials Science and Engineering at UNIST, are working to convert that otherwise wasted heat into electricity, using their own thermoelectric technique. The team has recently attracted much attention from the scientific community by introducing a new class of thermoelectric materials with superior performance and efficiency. Besides, through the processing of those materials into thin films, they were able to apply them onto curved surfaces, and thus improving the thermoelectric performance.

Professor Jae Sung Son, in collaboration with Professor Hosun Shin from Korea Research Institute of Standards and Science (KRISS), have succeeded in fabricating highly alligned SnSe thin films through a low-cost and scalable solution process. The new technique is a two-step process, which involves dissolving SnSe powder in a solvent composed of ethylenediamine and ethanedithiol, and purifying the resulting solution with acetonitrile to obtain a precipitate.

Thermoelectric (TE) deviecs generate electricity based on differences in temperature between each side of their materials. In order to construct high performance TE devices, superior TE materials have to be targeted via various strategies. In particular, the single crystal SnSe, which was initially reported in 2014, has been regarded as a very promising TE material, owing to its unexpectedly low thermal conductivity and high power factor. However, their efficiencies are limited, due to the challenges associated with controlling the crystal structure of SnSe.

“Compared with polycrystalline SnSe, which has a unique layered crystal structure like a stack of paper, SnSe thin films exhibit TE power factors at the single crystal level,” says Seung Hwae Heo in the Combined M.S/Ph.D. of Materials Science and Engineering at UNIST. “As wrinkles in papers lowers the quality of the prints, polycrystalline materials also lowers thermoelectric efficiencies.” 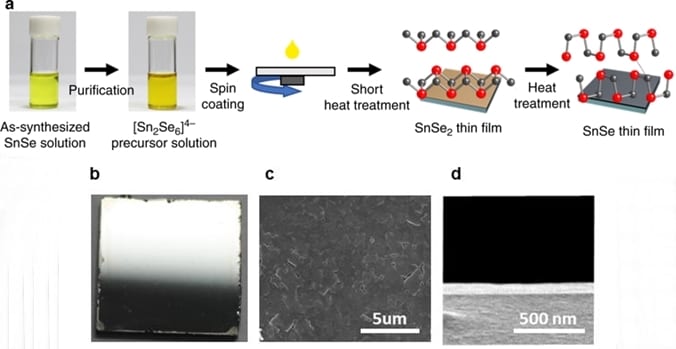 To solve this problem, the team developed a two-step solution process to grow SnSe in a particular direction. The process involves dissolving SnSe powder in a solvent composed of ethylenediamine and ethanedithiol, and purifying the resulting solution with acetonitrile to obtain a precipitate to fabricate highly textured SnSe thin films. The precipitate was dissolved in ethylenediamine to obtain the SnSe ink solution. The ink was spin-coated on a glass substrate and the film was heated for 1 min at 400℃. The coating process was repeated to obtain the desired thickness. Finally, the film was annealed at 400℃ for an appropriate time.

“Upon heating, Se evaporation occurs, which then leads to the transition from SnSe2 to SnSe in the thin film,” says Seungki Jo in the Combined M.S/Ph.D. of Materials Science and Engineering at UNIST. “It seems that the previously formed SnSe is serving as a milestone, allowing the newly-formed SnSe crystal structures to be aligned.”

The new SnSe thin film exhibit 10 times higher electrical properties than the previous study. In addition, it showed high performance comparable to that of a lump of SnSe material.

The research team also found that it is easy to optimize the physical properties by controlling the composition of the finished thin film material. This is because the ratio of selenium atoms forming crystals can be flexibly adjusted by adjusting the heat treatment temperature and time. In this study, tin-selenide films were also heat-treated at 400℃ for 1 minute, 5 minutes, 9 minutes, and 13 minutes, respectively.

“This new technology is not only simple and efficient, but also controls the direction of tin- selenide crystals,” says Professor Son. “With the technology, we can now manufacture high-performance thermoelectric thin films at low cost, and it will help develop standards for the measurement of ultra-thin film thermoelectric materials.”

The research team also expects that this method can be widely extended to cost-effective and scalable production of well-designed inorganic functional films.