5 days ago by Kevin Clemens

A U.K. company is partnering with an electrification specialist to build an all-electric version of the legendary Series II Land Rover.

A dozen years ago, if you wanted an electric vehicle (EV), you often had to build it yourself. In the days before the Nissan Leaf (2010), Mitsubishi i-MiEV (2011), and Tesla Model S (2012), converting an existing production car was one way to experience electrified transportation. Because they were small and manageable, foreign cars like the VW Beetle and British sports cars like the MG Midget or Triumph Spitfire were popular choices for backyard builders. 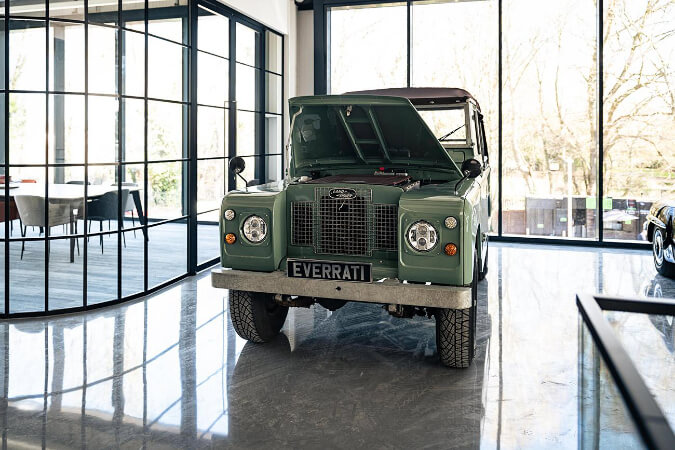 Fast-forward to 2022, and more than 30 EV models are available in the U.S. with dozens more on the way. Still, a small but growing cottage industry is emerging that converts classic cars into electrified vehicles. The difference between these professionally re-engineered EVs and earlier home-built efforts is significant in price, quality of workmanship, and level of technology.

There are several EV conversion companies in the U.S. (EV West stands out), however, some of the highest-end work is being done in the United Kingdom (U.K.). This makes sense. Even before World War II, England was well-established as a provider of specialist sports and racing cars. Today, nearly all the Formula One racing teams have headquarters and workshops in the British Midlands. Electrified versions of classic luxury cars like Rolls Royce, Jaguar, and Aston Martin are available from new specialists with the know-how to create modern EV masterpieces.

Everrati Advanced Technologies (EAT) is a company based in England that has electrified classic Porsche 911 and Mercedes-Benz models. Now that company has partnered with Hobson Industries, a leading Land Rover engineering company, to produce electrified versions of the iconic Land Rover Series II. Land Rover launched its first vehicle in 1948 and quickly became one of the most capable and legendary off-road vehicles. The Series II was launched in 1961 and continued the company’s tradition of rugged capability.

Since its establishment in 1987, Hobson Industries has supplied Land Rover know-how, parts, and service to private individuals, commercial users, and even the British defense forces. Until now, these Land Rovers have used the vehicle’s original style internal combustion engines (ICE), but with the Everrati partnership, Hobson will be able to provide nearly silent vehicles for security and military applications.

Founder and CEO of Everrati, Justin Lunny, said in a company news release, “We are delighted to announce this new partnership with Hobson Industries, a globally renowned expert in every aspect of through-life management of classic Land Rovers. One of the most ubiquitous vehicles in active service in the global security and defense sectors, these industries are increasingly embracing electrification, especially where quiet, stealth vehicles are required.”

The electric motor in the Everrati Land Rover produces 150 horsepower—significantly more than the original diesel or gasoline engine that equipped the Series II. That power results in a zero to 60 mph acceleration time under 13 seconds, while the 60 kilowatt-hours (kWh) battery pack allows a range of up to 150 miles on a single charge.

Why Electric Conversions of Classics?

Priced at an equivalent of over $181,000, the Everrati Land Rover Series II won’t be for everyone. Still, a few well-heeled individuals will probably be interested in owning something different from most other Land Rovers. The advantages presented in security work mean that Hobson will probably find a market for the stealthy Series II.

The bigger question is, why is there a market for electric conversions of iconic classics? As electrification moves more mainstream and the variety of EV options increases, the idea of charging overnight before heading out will become common. Re-engineering an older car to run on electricity often improves its environmental friendliness (by dramatically reducing emissions) and can improve the classic vehicle's overall performance and smoothness. True, the loss of a distinctive engine note of a beloved classic takes away some of the visceral appeal, but if it makes an old cherished classic easier to live with, it might be worth it.