A groundbreaking technology that would allow NASA to effectively cool tightly packed instrument electronics and other spaceflight gear is unaffected by weightlessness, and could be used on a future spaceflight mission. The image above shows the microgap-cooling technology developed by Goddard technologist Franklin Robinson and University of Maryland professor Avram Bar-Cohenthat  was tested twice on a Blue Origin New Shepard rocket. (Credits: NASA/Franklin Robinson)

During two recent flights aboard Blue Origin’s New Shepard rocket, Principal Investigator Franklin Robinson, an engineer at NASA’s Goddard Space Flight Center in Greenbelt, Maryland, and Co-Investigator Avram Bar-Cohen, a University of Maryland professor, proved that their microgap-cooling technology not only removed large amounts of heat, but also carried out this all-important job in low- and high-gravity environments with nearly identical results.

The demonstrations, funded by NASA’s Flight Opportunities program within the Space Technology Mission Directorate, opens the doors for the technology’s use on a future spaceflight mission, Robinson said. The technology development was also supported by the agency’s Center Innovation Fund.

“Gravity effects are a big risk in this type of cooling technology,” Robinson said. “Our flights proved that our technology works under all conditions. We think this system represents a new thermal-management paradigm.” 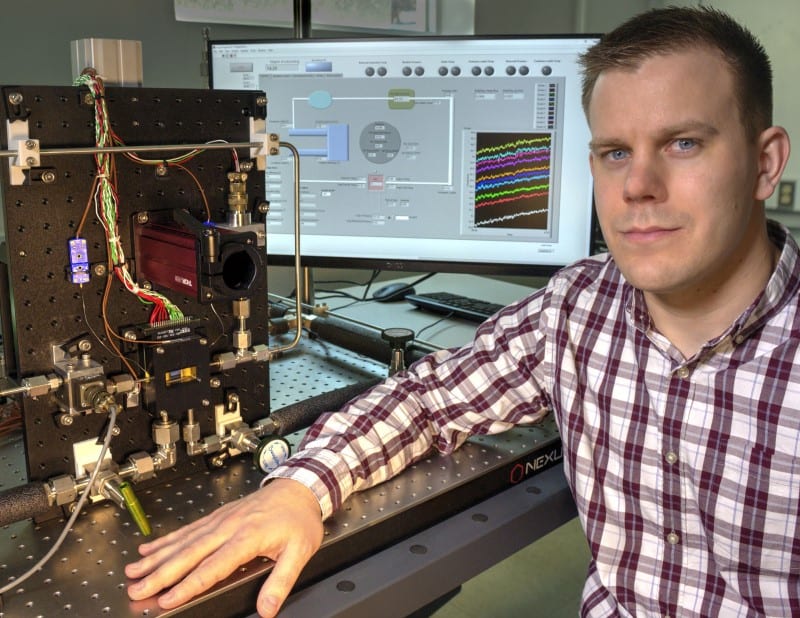 With microgap cooling, heat generated by tightly packed electronics is removed by flowing a coolant — in this case, a fluid called HFE 7100 that doesn’t conduct electricity — through embedded, rectangular-shaped microchannels within or between heat-generating devices. As the coolant flows through these tiny gaps, it boils on the heated surfaces, producing vapor. This two-phase process offers a higher rate of heat transfer, which keeps high-power devices cool and less likely to fail due to overheating.

The embedded cooling approach represents a significant departure from more traditional cooling technologies. With more conventional approaches, designers create a “floor plan.” They keep the heat-generating circuits and other hardware as far apart as possible. The heat travels into the printed circuit board, where it is directed eventually to a spacecraft-mounted radiator.

Unlike more traditional circuits, 3D circuits are created by literally stacking one chip atop another. Interconnects link each level to its adjacent neighbors, much like how elevators connect one floor to the next in a skyscraper. With shorter wiring linking the chips, data can move quickly both horizontally and vertically, improving bandwidth, computational speed and performance, all while consuming less power and occupying less space.

Despite its advantages, 3D circuitry presents a particular challenge for potential users both on Earth and in space: the smaller the space between the circuits, the harder it is to remove the heat, jeopardizing performance due to overheating. Because not all of the chips are in contact with a circuit board, traditional cooling techniques wouldn’t work with 3D circuitry. The emerging technology avoids this problem by running coolant within and between the stacked circuits.

Although originally conceived for use in 3D circuitry, microgap cooling could help a host of spaceflight electronic devices, including power electronics and laser heads. They, too, are shrinking in size and need an effective system for removing heat from tightly packed spaces. “We see an application for microgap cooling in any power-dense electronic device used in space,” Robinson said.

Prior to the two flights, Robinson and Bar-Cohen had tested their cooling technology at various orientations in a laboratory. However, they needed to certify the technology’s operation in space and under varying gravity environments. With the successful demonstration, Robinson believes the cooling technology is ready for primetime. “I think we’re now at the right technology-readiness level to implement embedded cooling on flight projects,” he said.