NASA’s researchers are on their way to breaking the boundaries in solid-state battery technology for air mobility and electric flight applications. 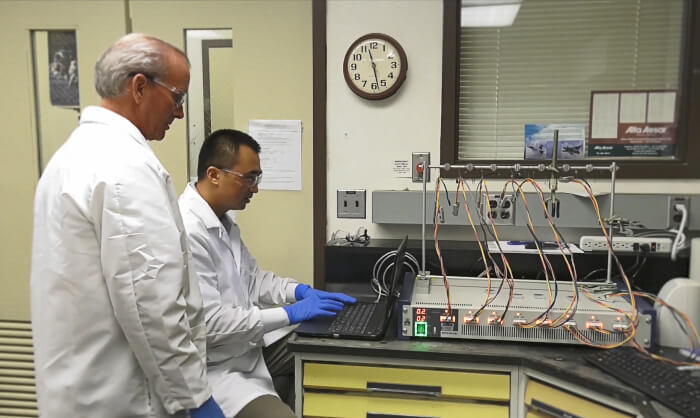 NASA researchers Yi Lin and John Connell use a cyclic voltameter to test the performance of their newly developed SSB cathode. Image used courtesy of NASA

SSBs are a new type of battery being researched and developed. These batteries are considered the next generation of battery technology because they are known to exhibit a higher capacity, provide faster charging, and confer greater safety compared with lithium-ion batteries (LiBs).

Considered the most popular type of battery, LiBs are used in consumer electronics and electric vehicles. These batteries work by shuttling lithium ions between electrodes. The liquid electrolyte (LE) that provides the ions is usually a mixture of organic solvents and salts.

If these batteries are damaged, the LE can leak out, short-circuit the electrodes, and cause a fire or an explosion. SSBs use solid electrolytes (SEs) and not LEs, which improves battery safety.

NASA has been experimenting with unique material to enhance battery power discharge.

A battery discharge cycle is a process of using up the charge in a battery. This is also known as running down a battery.

A discharge cycle begins when a device or equipment is used until it stops working. The process starts with charging the battery and ends with discharging it fully, which means using up its power supply. For most batteries, discharging a battery completely or even beyond 50% is not advisable. This is because increasing battery discharge can decrease battery life span.

A discharge cycle can be used for two purposes: to determine how long a device will last on a single charge and to measure the overall lifetime of the battery.

Over the past year, the SABERS team has successfully increased its SSB’s discharge rate tenfold. The team followed its success with another fivefold increase in discharge rate.

The SABERS researchers have devised a way of making their SSB more lightweight by stacking battery cells vertically inside a single casing. This architecture opposes the structure of liquid batteries, which would typically house individual battery cells within a steel enclosure. Researchers say their vertically stacked cells reduce overall battery weight by 30 percent to 40 percent. Researchers also affirm that the lighter-weight architecture can enable two or even three times as much energy to be stored than would be possible with LiBs.

The SABERS battery consists of a Li-metal anode, SE, and sulfur/selenium (S/Se) cathode. The S/Se cathode integrates NASA-developed “holey graphene” and S/Se particles. As the name implies, holey graphene incorporates holes in the surface of the material, which reduces battery weight and enhances conductivity. 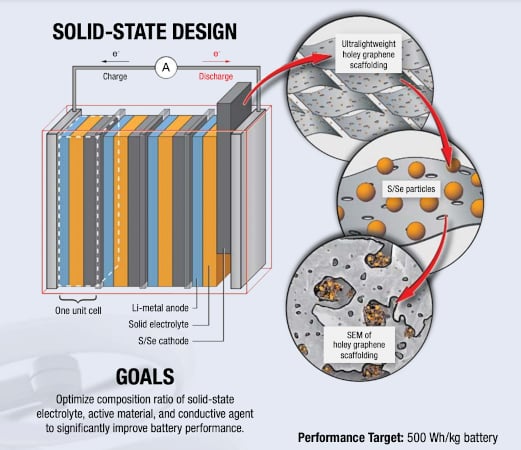 A depiction of the SABERS SSB. Image used courtesy of NASA

When SABERS researchers tested their battery under different temperatures and pressures, they found that it could run at temperatures almost twice as hot as those tolerated by LiBs. Further testing at higher temperatures is still ongoing.

Among the team’s collaborative partners (including Pacific Northwest National Laboratory and Argonne National Laboratory), Georgia Tech helped the SABERS team determine how its SSB might best be manufactured and improve its design by investigating the effects of varying pressure on the battery.

SABERS is also working with other projects and NASA centers for another five years until the activity transitions into the Transformational Tools and Technologies project.

Looking ahead, the SABERS team is contemplating the next step in applying its SSB technology. The team’s battery has already come under the radar of the Subsonic Single Aft Engine activity. This activity is focusing on developing a hybrid-electric concept aircraft.