Providing the power needed for habitats on the moon will require several new technologies to be developed.

When humans colonize the moon, we will need electric power to support habitats, provide charging for lunar rovers, and power construction equipment. NASA has already started thinking in those terms as it has chosen three companies to design and build prototype deployable solar arrays as a part of its lunar Artemis program. 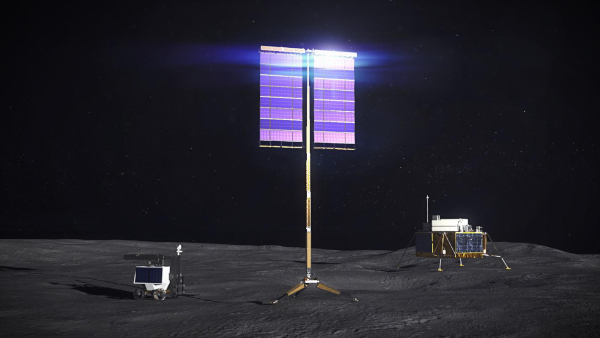 Artist’s view of a vertical solar array as deployed on the lunar surface. Image used courtesy of NASA

Artemis is designed to return humans to the Moon while building a long-term lunar base near the Moon’s South Pole. The vertical solar arrays that NASA has in mind will deploy autonomously and reach heights of 32 feet to provide power near the lunar poles, where the sun does not rise high above the horizon. The solar arrays can also retract in case it becomes later necessary to move them.

“These prototypes will provide promising solutions for reliable power sources on the Moon, which are key to the success of almost anything we do on the surface,” said Niki Werkheiser, director of technology maturation in NASA's Space Technology Mission Directorate (STMD) in a NASA news release. "This exciting effort plays a critical role that will quite literally help power our Artemis exploration in the uniquely challenging environment of the Moon's South Pole."

The three companies chosen to design, build, and test prototypes of the lunar-solar arrays will share $19.4 million in funding. $6.2 million each will go to Pittsburgh-based Astrobotic Technology and Lockheed Martin in Littleton, Colorado. $7 million will go to Honeybee Robotics, located in Brooklyn, NY.

Each company must provide a design that can remain stable on different terrains, resist abrasion caused by lunar dust, and take up a minimal amount of space before they are deployed to make the trip through space from the Earth to the Moon. The companies will not only build prototypes but will also be involved in the testing to ensure the designs meet mission requirements.

“We are very excited to be able to select these three teams as they all bring very different technological solutions as well as unique visions for how commercial space can support a sustained presence on the Moon,” said Chuck Taylor, Vertical Solar Array Technology (VSAT) project manager at NASA’s Langley Research Center in Hampton, Virginia.

Solar power isn’t the only source of energy that NASA is looking forward to for future lunar missions.

NASA and the U.S. Department of Energy (DOE) have selected three design concept proposals for small and lightweight nuclear fission reactors that will allow operations on the Moon and eventually on Mars. Contracts for the three design proposals—worth $5 million each—will fund the initial design concepts for a 40-kilowatt reactor that can provide long-term power capability regardless of location or solar exposure. The reactors are expected to last at least 10 years when deployed on the moon. 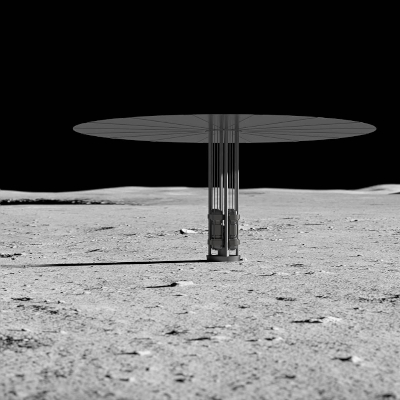 Artist rendition of fission reactor on the moon. Image used courtesy of NASA

The purpose of the Artemis program is to build a base camp on the moon that will provide a gateway to further remote and manned exploration of other planets within the solar system. The goal of Artemis by the end of the decade is to allow astronauts to live and work on the lunar surface for periods of up to 2 months at a time.

"New technology drives our exploration of the Moon, Mars, and beyond," said Jim Reuter, associate administrator for NASA's Space Technology Mission Directorate in a NASA news release about the fission reactor program. "Developing these early designs will help us lay the groundwork for powering our long-term human presence on other worlds."