Rice University researchers have found that fracture-resistant “rebar graphene” is more than twice as tough as pristine graphene. Graphene is a one-atom-thick sheet of carbon. On the two-dimensional scale, the material is stronger than steel, but because graphene is so thin, it is still subject to ripping and tearing.

Rebar graphene is the nanoscale analog of rebar (reinforcement bars) in concrete, in which embedded steel bars enhance the material’s strength and durability. Rebar graphene, developed by the Rice lab of chemist James Tour in 2014, uses carbon nanotubes for reinforcement.

The experiments showed that nanotubes help graphene stay stretchy and also reduce the effects of cracks. That could be useful not only for flexible electronics but also electrically active wearables or other devices where stress tolerance, flexibility, transparency and mechanical stability are desired, Lou said.

Both the lab’s mechanical tests and molecular dynamics simulations by collaborators at Brown University revealed the material’s toughness.

Graphene’s excellent conductivity makes it a strong candidate for devices, but its brittle nature is a downside, Lou said. His lab reported two years ago that graphene is only as strong as its weakest link. Those tests showed the strength of pristine graphene to be “substantially lower” than its reported intrinsic strength. In a later study, the lab found molybdenum diselenide, another two-dimensional material of interest to researchers, is also brittle. 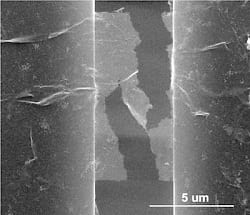 An image depicts a sample of rebar graphene after testing under an electron microscope by materials scientists at Rice University. It shows how cracks propagate in a zigzag way, rather than straight, as would be seen in plain graphene. The rebar graphene is attached by molecular forces on both sides to a platform that slowly pulls the material apart. Photo by Emily Hacopian/Lou Group

Tour approached Lou and his group to carry out similar tests on rebar graphene, made by spin-coating single-walled nanotubes onto a copper substrate and growing graphene atop them via chemical vapor deposition.

To stress-test rebar graphene, Hacopian, Yang and colleagues had to pull it to pieces and measure the force that was applied. Through trial and error, the lab developed a way to cut microscopic pieces of the material and mount it on a testbed for use with scanning electron and transmission electron microscopes.

“We couldn’t use glue, so we had to understand the intermolecular forces between the material and our testing devices,” Hacopian said. “With materials this fragile, it’s really difficult.”

Rebar didn’t keep graphene from ultimate failure, but the nanotubes slowed the process by forcing cracks to zig and zag as they propagated. When the force was too weak to completely break the graphene, nanotubes effectively bridged cracks and in some cases preserved the material’s conductivity.

Simulations by study co-author Huajian Gao and his team at Brown confirmed results from the physical experiments. Gao’s team found the same effects in simulations with orderly rows of rebar in graphene as those measured in the physical samples with rebar pointing every which way. 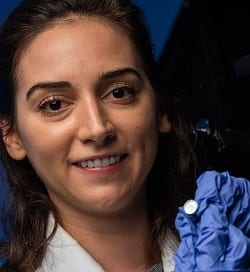 Rice University graduate student Emily Hacopian holds the platform she used to study the strength of rebar graphene under a microscope. Hacopian and colleagues discovered that reinforcing graphene with carbon nanotubes makes the material twice as tough. Photo by Jeff Fitlow

“The simulations are important because they let us see the process on a time scale that isn’t available to us with microscopy techniques, which only give us snapshots,” Lou said. “The Brown team really helped us understand what’s happening behind the numbers.”

He said the rebar graphene results are a first step toward the characterization of many new materials. “We hope this opens a direction people can pursue to engineer 2D material features for applications,” Lou said.