Research from RMIT University shows a new type of ultra-efficient, nano-thin material that could advance the development of self-powered electronics considerably.

This flexible and printable piezoelectric material is reportedly 100,000 times thinner than human hair and is capable of converting mechanical pressure into electrical energy with 800% more efficiency than traditional piezoelectrics based on similar non-toxic materials.

According to the study, which was published on Materials Today last month, the material could be also fabricated using liquid metals through commercially available methods.

According to the researchers who worked on the new study, synthesizing 2D nanomaterials with controlled sub-nanometer thicknesses from non-layered crystals presents both substantial challenges and great opportunities.

“Until now, the best performing nano-thin piezoelectrics have been based on lead, a toxic material that is not suitable for biomedical use,” explained lead researcher Dr. Nasir Mahmood.

To circumvent the issue, the Australian research team has deployed a self-limiting approach to prepare large sheets of 2D zinc oxide (ZnO) at the metal-melt/air interface.

“Our new material is based on non-toxic ZnO, which is also lightweight and compatible with silicon, making it easy to integrate into current electronics,” Mahmood added.

During the experiment, the ultra-thin sheets demonstrated highly crystalline hexagonal structures, and the specific ZnO hexagonal sheet thickness and its interaction with the substrate were noticed to have a critical impact on the piezoelectric material.

To achieve the aforementioned result, the researchers heated ZnO until it became liquid, then exposed it to oxygen to provoke the formation of a nano-thin layer on top.

The team then proceeded to roll the metal over a surface to print off nano-thin sheets from the ZnO “skin”.

According to the researchers, the use of this technique, which is compatible with most manufacturing processes, could enable the production of large-scale sheets of the material. 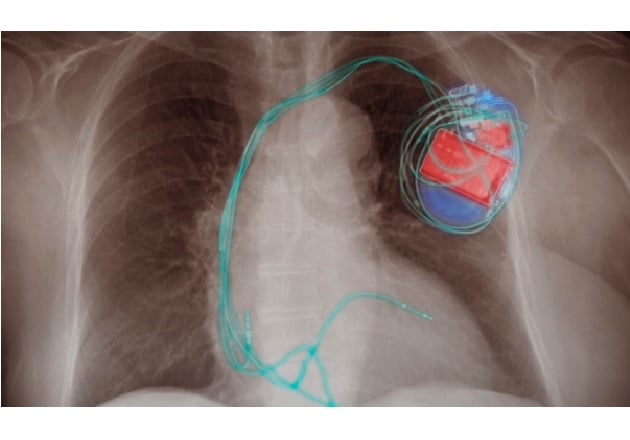 The nano-thin piezoelectrics could be utilized in devices capable of converting blood pressure into a power source for pacemakers. Image used courtesy of RMIT.

“It’s so efficient that all you need is a single 1.1-nanometre layer of our material to produce all the energy required for a fully self-powering nanodevice,” Mahmood said.

The scientists said they are now working on implementing the technology into ultrasonic detectors for use in defense and infrastructure monitoring, and in nanogenerators for harvesting mechanical energy.

These are not the only applications for the new material, however.

For example, in terms of biomedical applications, the nano-thin piezoelectrics could be utilized for internal biosensors and self-powering biotechnologies capable of converting blood pressure into a power source for pacemakers.

The material could also be used to create smart oscillation sensors that can detect faults in infrastructures like buildings and bridges, for instance, to predict earthquakes.

The study was funded by the Australian Research Council and the ARC Centre of Excellence in Future Low-Energy Electronics Technologies (FLEET).