UCF and NASA researchers have developed a lightweight, supercapacitor-battery hybrid composite material that can power an electric vehicle while acting as a structural shell.

Though the adoption of electric vehicles (EVs) is rapidly gaining steam across international markets, battery technology is still hampered by a slew of limitations, chief among them low range, battery degradation, long charging times, and the risk of thermal runaway.

To address some of these limitations, a team of researchers from the University of Central Florida and NASA have developed energy-storing carbon-fiber composites that together can function as EV body panels.

The composites are both far lighter than steel and more durable, thanks to the high tensile and impact strength polymer formed from the carbon fibers of the supercapactor’s electrodes. What’s more, supercapacitors can be charged and discharged far more quickly than EV batteries.

As a result, the composites developed here could one day drastically reduce EV weight while packing in extra charge, leading to significant gains in range.

The Chemistry Behind the Composite

Supercapacitors are constructed from two carbon electrodes, which are electrochemically etched with organic or ionic liquid electrolytes to achieve high voltage and energy. Those same electrolytes are used to facilitate the flow of ions between the anode and cathode in EV batteries.

Problem is, in body panels, they constitute a serious safety concern.

“The problem with the lithium battery, as you might know, [is that] it can catch fire, right? It is flammable,” said team leader Jayan Thomas, in an interview with EE Power. “So, you know, forget about using it as the body shell of a car.” 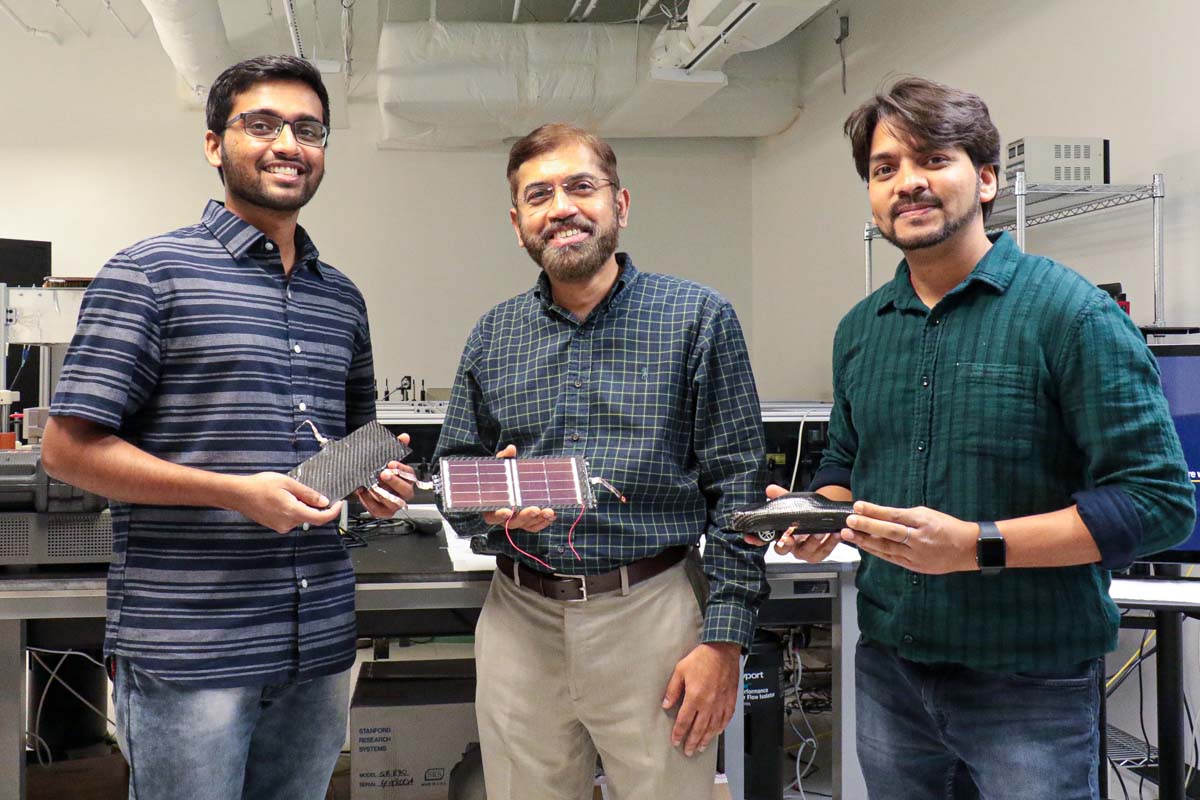 Thomas (center) and his team published their research in the March 3 edition of the journal Small, where it was the cover story. Image used courtesy of UCF

To get around that, Thomas and his team utilized an aqueous electrolyte with metal oxide electrodes, which offer higher voltage thanks to larger work function differences. The team chose manganese oxide and molybdenum oxide as positive and negative electrode materials, as they provide high capacitance through the pseudocapacitive charge storage mechanism. And they are cheaper and easier to synthesize, to boot.

The VGCF provides a nano-porous architecture for better diffusion and transport of ions. That improved diffusion in turn provides the team’s supercapacitors with exceptionally long lifecycles, which is crucial.

“You don’t want to buy a car that needs to change its body shell in six years or so,” said Thomas, a professor in UCF’s NanoScience Technology Center and Department of Materials Science and Engineering.

As for the composite’s robust mechanical strength, the supercapacitor’s electrodes utilize a polymer gel electrolyte, which is then converted into a composite using resin and hardener. Tested under ASTM, industry-standard strength protocols, it performed near commercial-grade.

To demonstrate the composite’s viability for use in EVs, the researchers powered a small prototype electric car constructed of carbon fiber reinforced polymer (CFRP) composite with a floor panel of e-CFRP. They found that each composite, based on the performance of 2 cm x 2 cm electrode deposit squares, delivered its best performance at 40mA.

In practical applications, the team estimated that any panel with a total area of 10 meters squared, including the roof, door, and trunk lid, could be replaced with an e-CFRP composite.

Beyond EVs, Deepak Pandey, the study’s lead author and a doctoral student in Thomas’ lab, emphasized the implications in particular for CubeSats.

“Making a cubic satellite out of this composite will make the satellite light in weight and will help to eliminate the heavy battery pack,” Pandey said. “This could save thousands of dollars per launch. Further, free volume gained by removal of big batteries could help pack in more sensors and testing equipment, increasing the functionality of the satellite.”

Oh, and as body armor for super soldiers. But unfortunately, Thomas said, no further word on that yet.