The result here is an 800 V inverter that will make for faster, lighter, and cheaper drivetrains able to boost sustainability in next-gen EVs, McLaren Applied said in its press release announcing the debut.

The company has slated volume production for 2024, and is already delivering prototypes to potential customers. Those prototypes consist of "production intent design hardware," per McLaren Applied's release, as the company intends for continued testing and development. If further modifications are needed, the design debuted at this year's FPC2022 may not be fully reflective of the final product.

What Is an Inverter?

The power source for today’s EVs are lithium-ion batteries, which store DC power. The motors utilized in EVs generally employ AC power, and it is the job of the inverter to change DC into AC. Inverters are also used for other purposes, such as converting the DC generated by solar cells into the AC required by the power grid. For vehicular applications, saving weight and space is absolutely essential, which is why the IPG5 weighs a mere 5.5 kg, and sports a volume equivalent to 3.79 liters.

EV OEMs are transitioning from 400 V systems to 800 V systems. That’s because an 800 V system uses half the current of its 400 V predecessors for the same power, and thanks to the relationship of lost power to I2R, it wastes less power as heat.

“Across the industry, we’re seeing rapid progression of technology,” said Nick Fry, a non-executive chairman at McLaren Applied. “If OEMs want to remain competitive and deliver vehicles with greater ranges, faster charging times and better acceleration, they must make the transition to an 800 V silicon carbide architecture.”

It should be noted that the IPG5 is an applicable choice for OEMs still using 400 V systems. Once manufacturers decide to make the switch, McLaren Applied’s inverter will readily accommodate the upgrade to 800 V.

The IPG5 is essentially motorsport-grade technology, optimized for application in EVs. McLaren Applied’s background in the motorsport world traces back to the 1990s, when it first began supplying complete control systems to Formula 1. Its sister company, McLaren Racing, has even deeper roots; It began competing in the series, run by the Federation Internationale de l’Automobile, in the 1960s. 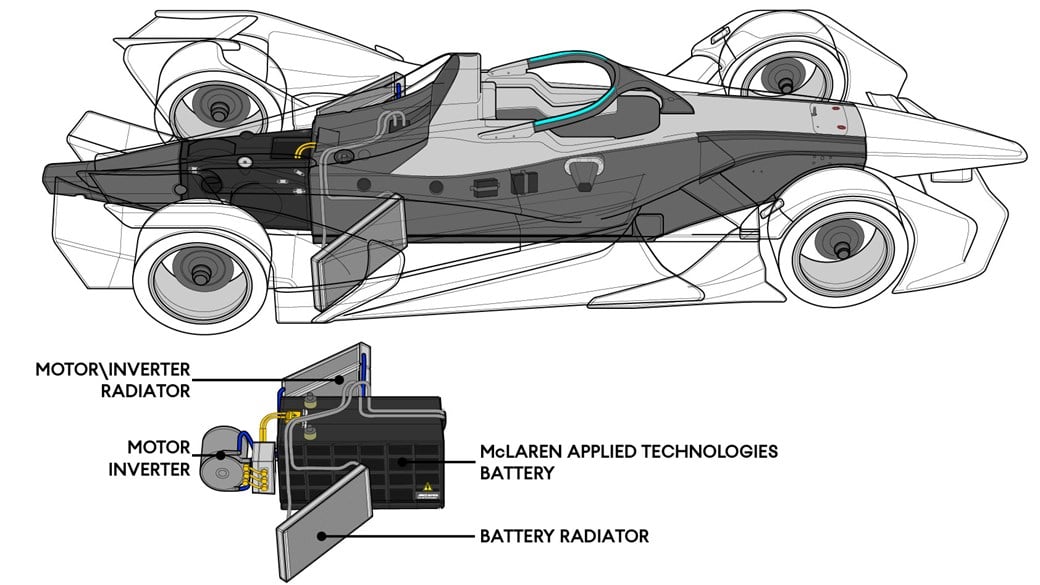 Informed by that robust heritage, McLaren Applied has been a player in Formula E, the all-electric offshoot of Formula 1, nearly since its 2014 inception. In 2018, the company became that series’ sole provider of 2nd-generation batteries, which run at 200 W with a 250 W peak, through the end of the 2022 season.

The IPG5 can tolerate inputs of up to 900 V. Three-phase motor drive electrical frequency outputs of up to 2.5 kHz are possible.

The inverter must be able to communicate with the rest of the EV. Features include:

The IPG5 Is Available Cageless

Most full-system inverters are housed in a cage, but the IPG5 is offered with or without its stout version. This can provide advantages to an OEM, specifically if it decides to build the device into a larger subsystem utilizing its own protection. Such a system would nullify an inverter-specific cage, making it a source only of unnecessary weight and size.