Researchers from Sandia National Laboratories have developed a tiny silicon-based device that can harness what was previously called waste heat and turn it into dc power. Their advance was recently published in Physical Review Applied.

“We have developed a new method for essentially recovering energy from waste heat. Car engines produce a lot of heat and that heat is just waste, right? So, imagine if you could convert that engine heat into electrical power for a hybrid car. This is the first step in that direction, but much more work needs to be done,” said Paul Davids, a physicist and the principal investigator for the study.

Called RTGs, the generators are used for such tasks as powering sensors for space missions that don’t get enough direct sunlight to power solar panels.

Think of the Mars rover Curiosity; the spectacular photos and wealth of data gathered by the Cassini mission to Saturn and the New Horizons mission to Pluto; and the Voyager probes — the only objects humans ever sent out of our solar system, now 13 and 11 billion miles away and still transmitting data back to Earth.

Davids' device is made of common and abundant materials, such as aluminum, silicon and silicon dioxide — or glass — combined in very uncommon ways. 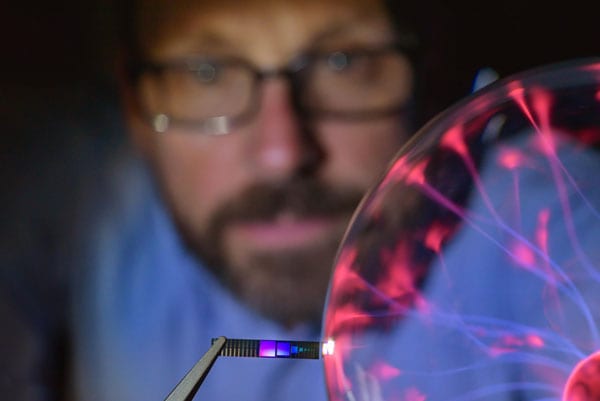 Sandia physicist Paul Davids hopes that his team’s rectenna may someday replace radioisotope thermoelectric generators as the go-to compact power supply for deep space missions and other uses where you can’t just go and replace the batteries.

The device is about 1/8 inch by 1/8 inch, half as thick as a dime and metallically shiny. The top is aluminum that is etched with stripes roughly 20 times smaller than the width of a human hair. This pattern, though far too small to be seen by eye, serves as an antenna to catch the infrared radiation.

Between the aluminum top and the silicon bottom is a very thin layer of silicon dioxide. This layer is about 20 silicon atoms thick or 16,000 times thinner than a human hair. The patterned and etched aluminum antenna channels the infrared radiation into this thin layer.

The infrared radiation trapped in the silicon dioxide creates very fast electrical oscillations, about 50 trillion times a second. This pushes electrons back and forth between the aluminum and the silicon in an asymmetric manner. This process, called rectification, generates net dc electrical current.

The team calls its device an infrared rectenna, a portmanteau of rectifying antenna. It is a solid-state device with no moving parts to jam, bend or break, and doesn’t have to directly touch the heat source, which can cause thermal stress.

Because the team makes the infrared rectenna with the same processes used by the integrated circuit industry, it’s readily scalable, said Joshua Shank, electrical engineer and the paper’s first author, who tested the devices and modeled the underlying physics while he was a Sandia postdoctoral fellow.

He added, “We’ve deliberately focused on common materials and processes that are scalable. In theory, any commercial integrated circuit fabrication facility could make these rectennas.”

That isn’t to say creating the current device was easy. Rob Jarecki, the fabrication engineer who led process development, said, “There’s immense complexity under the hood and the devices require all kinds of processing tricks to build them.”

One of the biggest fabrication challenges was inserting small amounts of other elements into the silicon, or doping it, so that it would reflect infrared light like a metal, said Jarecki. “Typically you don’t dope silicon to death, you don’t try to turn it into a metal, because you have metals for that. In this case we needed it doped as much as possible without wrecking the material.”

“We’ve deliberately focused on common materials and processes that are scalable. In theory, any commercial integrated circuit fabrication facility could make these rectennas,” Jarecki continued.

The devices were made at Sandia’s Microsystems Engineering, Science, and Applications complex. The team has been issued a patent for the infrared rectenna and has filed several additional patents.

The version of the infrared rectenna the team reported in Physical Review Applied produces 8 nanowatts of power per square centimeter from a specialized heat lamp at 840 degrees. For context, a typical solar-powered calculator uses about 5 microwatts, so they would need a sheet of infrared rectennas slightly larger than a standard piece of paper to power a calculator.

But they have a lot of ideas to improve efficiency.

They include making the rectenna’s top pattern 2D x’s instead of 1D stripes, in order to absorb infrared light over all polarizations; redesigning the rectifying layer to be a full-wave rectifier instead of the current half-wave rectifier; and making the infrared rectenna on a thinner silicon wafer to minimize power loss due to resistance.

Through improved design and greater conversion efficiency, the power output per unit area will increase. Paul thinks that within five years, the infrared rectenna may be a good alternative to RTGs for compact power supplies.

Shank said, “We need to continue to improve in order to be comparable to RTGs, but the rectennas will be useful for any application where you need something to work reliably for a long time and where you can’t go in and just change the battery. However, we’re not going to be an alternative for solar panels as a source of grid-scale power, at least not in the near term.”

Davids added, “We’ve been whittling away at the problem and now we’re beginning to get to the point where we’re seeing relatively large gains in power conversion and I think that there’s a path forward as an alternative to thermoelectrics. It feels good to get to this point. It would be great if we could scale it up and change the world.”

The research was funded by Sandia’s Laboratory Directed Research and Development program.