PREMO has announced recent advances achieved regarding heat dissipation in the company's 3DPower™ integrated magnetics components in combination with new techniques to produce iron powder magnetic core (FeSi6) to increase the impedance versus frequency and at the same time extend the saturation level of the core.

PREMO 3DPower is the first product to integrate two magnetics components that share the same core and feature two orthogonal magnetic fields at all points within the core, thus continuing improvement in high current chokes from thermal, insertion losses and saturation level point of view.

This innovation is designed for on-board chargers (OBC) and dc-dc converters where filtering at the output is mandatory and the increasing of power delivered cause heating in the power inductive components and other critical failures such as magnetic core saturation. 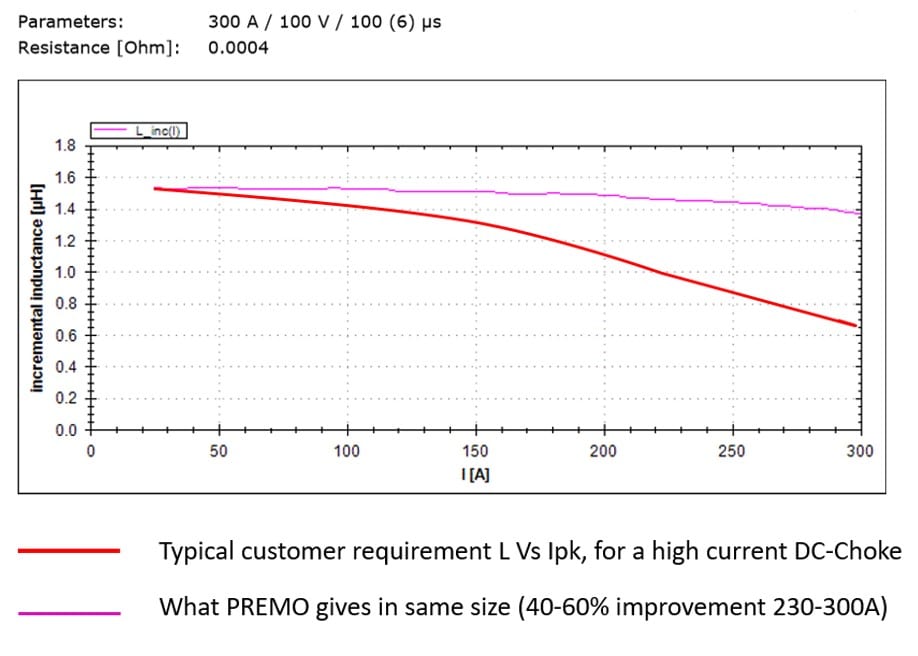 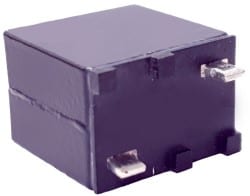 In the graph above, the red shows inductance versus current when a Core Set FeSi6 is used (standard component) and the pink one is the same curve but with a complete iron powder core (FeSi6) covering flat wire winding.

This improvement is possible thanks to the distributed gap (FeSi6), isolated grain by grain, and a convenient compaction level of iron powder, while respecting the original size of output inductor.

On the other hand, there are also other kinds of output chokes where the power dissipation is really critical, considering copper heating (joule effect) and core heating (core losses) and consequently the temperature rise during operation (also Bsat decrease as temperature increase), especially at high temperature range, where the final temperature value can be close to curie temperature and make operation more unstable.

CoolMag™ makes extending the operation temperature range possible, increasing the reliability of power inductive components as well as of OBC and dc-dc converters. With every 10ºC of temperature decrease, the reliability or MTBF (mean time between failures) is multiplied by 2.

CoolMag is a thermally conductive compound able to fill any space between winding and core (and between core and heat-sink in case of use aluminum or magnesium dissipation).

The thermal conductivity of CoolMag can be between 1.5 and 1.8 W/mK, which is enough to reduce the temperature gradient in more than 40ºC.

One of the first observed impacts of using CoolMag is on the Inductance value versus temperature (after stabilization) as exemplified in the following graph. 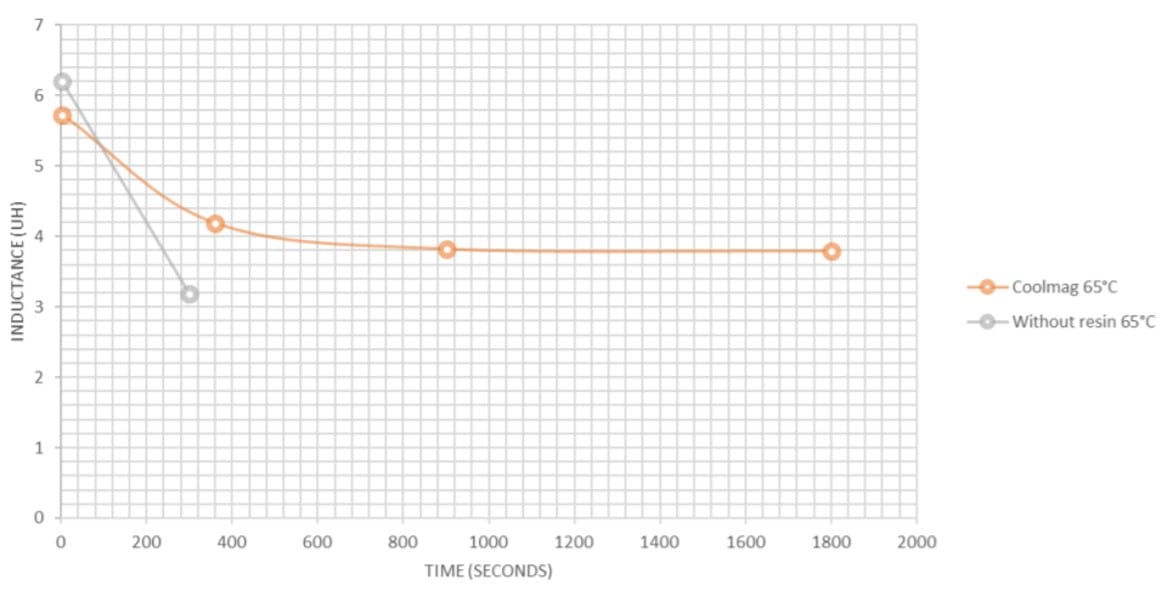 The grey line is the inductance variation without CoolMag.The core reaches saturation in only 5-6 minutes.

The orange curve shows the inductance variation with CoolMag, which remains within the nominal value throughout time.

The temperature gradient with and without CoolMag is above 40ºC.