Dynex Power Inc. announced that revenue for the year ended December 31st, 2017, was $47.5 million, 17% higher than in the preceding year. In sterling terms (sterling weakened approximately 6% versus the Canadian dollar), revenue grew by approximately 25%, and was the highest in the history of the company. The growth in revenues was driven by a strong performance across all lines of business.

Expenses decreased from $8.0 million in 2016 to $6.9 million in 2017. This headline decrease was driven by other income of $1.5m, with underlying expenses (excluding other income) of $8.4 million, an increase on 2016 of $0.4 million. Accounting for this increase were research and development costs which rose by $ 0.2 million, and foreign exchange losses of $0.2 million.

New orders received in 2017 totaled $42.5 million, resulting in a book-to-bill ratio of 0.9. The closing order book at the end of 2017 was $9.1 million, compared with $13.4 million at the end of 2016. The market is moving towards shorter lead times; the Company is responding to this through improvements in operational efficiency, strategic stocking on high volume parts, and more efficient marketing.

Summary financial information for the twelve months ended December 31st, 2017 is as follows: 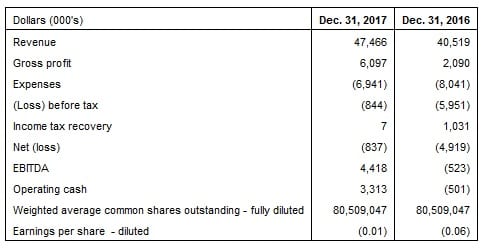 Clive Vacher, President and Chief Executive Officer commented, "Dynex made substantial progress in 2017, following the robust five-workstream turnaround plan tabled at the AGM in June. The key performance metrics show strong improvement, and the financials have followed. Most importantly, from a product perspective, our progress in 2017 has provided the confidence that Dynex can be a leader in the industry, with market-leading levels of technology, quality and performance.

“Much work still needs to be done to bring sustained profitability and growth, and there are some short-term concerns related to the current backlog. As a result of the diminished backlog, we will not be able to sustain a revenue level that shows profitability in the first quarter of 2018. However, we are intensely focused on increasing order intake. This, coupled with some significant cost reductions, forms part of the next iteration of the turnaround plan, which intensively focuses on long-term financial stability and growth. It will take time, but our confidence is high,” Vacher continued.

Alan Lyons, Chief Financial Officer added, "The results for 2017 are a very positive improvement. As our operational efficiency improvements continue, the results will translate into improved financial performance. While we continue to pursue the goal of further revenue growth in 2018, we are also focusing on cost reduction and working capital initiatives to improve our margin and operating cash flow.

“Specifically, our cost reduction activities are progressing well, and we will build on $1m of annualized savings that we are expecting to lock in during Quarter 1 2018.  The first half of 2018 will be challenging, but we intend to build on the positive improvements of 2017 and show success in 2018 and beyond," stated Lyons.

Mr Liu Ke'an, the Chairman of Dynex, commented "Dynex's results in 2017 demonstrate a material improvement in performance. This represents a very encouraging basis for further improvements in 2018. The leadership team has my full support. I am growing in my confidence that the business now has the momentum it needs to succeed well into the future."