U.S. Army Research Laboratory-funded research at the University of Michigan has resulted in demonstrating a new approach for more effectively converting heat into electricity. The research focused on fundamental improvements to an approach traditionally referred to as thermophotovoltaics, or TPV, and such technologies that are useful to Soldiers because they can enable generation of power from any heat source.

Additionally they can be configured to work with sunlight in the day and with any combustible fuel in the night making them particularly useful for operation in the field.

The team of researchers accomplished this breakthrough, a 40-fold enhancement in comparison to traditional TPV, by employing new physical phenomena that arise at the nanoscale. The scientists said devices built using this approach can work far more effectively for remote power generation as well as in waste heat recovery.

These results are published in a recent edition of Nature Nanotechnology, authored by graduate students and postdoctoral fellows Dr. Anthony Fiorino, Dr. Linxiao Zhu, Dakotah Thompson, Rohith Mittapally and Professors Pramod Reddy and Edgar Meyhofer from the Mechanical Engineering Department of the University of Michigan.

"Our work clearly demonstrates that performance of thermophotovoltaic devices that employ a photovoltaic cell and a hot object as an emitter, can be dramatically enhanced," Meyhofer said. 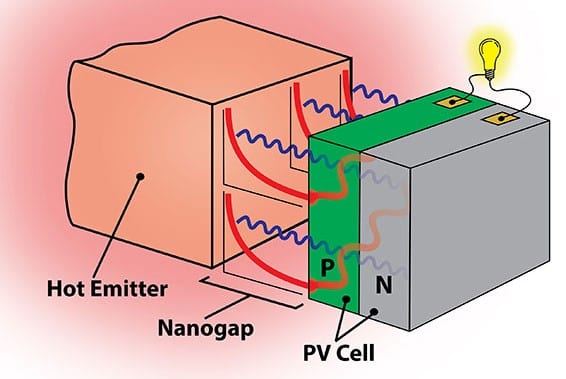 Thermal radiation from a hot emitter is directly converted to electricity in the PV cell. Experimental work from the UM team reveals that the power output is enhanced ~40-fold due to contributions by tunneling of photons (red) in nanoscale gaps (also called the near-field), in addition to the far-field propagating wave contribution (blue) from the emitter to the PV cell. (U.S. Army illustration)

Meyhofer explained that in traditional photovoltaic cells photons (light) from the sun are converted to electrical energy; however, in a thermophotovoltaic device, light from a hot object heated by any source (e.g. industrial waste heat, burning a fuel, by concentrating solar energy onto the object etc.) can be converted into electricity directly.

"The key innovation of the work is a first demonstration that the power output of thermophotovoltaic devices can be increased by 40 fold when the gap size between the emitter and the photovoltaic cell is reduced to the nanoscale," Reddy said.

This enhancement occurs because photons that usually cannot be transferred from the emitter to the receiver can now be readily transferred due to a process akin to tunneling that is observed in quantum mechanical devices.

In fact, this process of tunneling of photons, also called near-field radiative heat transfer, was illuminated recently by the authors of this work in a separate paper that was also funded by the Army Research Laboratory.

"In this work we showed experimentally that the transfer of energy via photons from a hot object to a cold object separated by a nanoscale gap can be increased by 800 folds compared to the limits set by Max Planck (one of the key players in the foundation of quantum mechanics) for objects that are separated by large distances," Meyhofer said. These results were reported in May in Nano Letters as well.

In order to illustrate the dramatic advances possible by taking advantage of the photon tunneling this research team has employed novel nanofabricated emitter devices and a custom-built nano-positioning platform which enables precise alignment of the emitter device with respect to a commercially purchased PV cell.

"Demonstrating large enhancement in power generation by taking advantage of photon tunneling in nanoscale gaps has been a long sought after goal by several scientists and engineers; however, the desired results have remained elusive until this work due to the challenges in creating ultra-small (60 nm) gap sizes between the hot emitter and the PV cell," said Zhu, a co-lead author on the thermophotovoltaic work.

"In addition, to increasing the power outputs of the cells it would also be possible to dramatically increase the efficiency of energy conversion," Reddy said.

The structure of the emitters and PV cells can be optimized to reach efficiencies that rival those of current photovoltaic technologies, he said.

"In fact, in comparison with several solar based thermophotovoltaic technologies, which are limited to 34 percent, (by the Shockley-Queisser limit) the efficiency of thermophotovoltaic systems can be as high as 80 percent; however, before such devices can be realized, many fundamental basic science questions need to be addressed to better understand the details of photon tunneling at the nanoscale between materials and how the tunneling rates and processes can be controlled via suitable material structures and nanostructuring of materials", said Dr. Chakrapani Varanasi, Program Manager for Physical Properties of Materials at ARL's Army Research Office.

Some of the necessary research required to realize the full potential of nanoscale thermophotovoltaic energy conversion is to understand how novel materials such as graphene and other 2-D materials (e.g. metal chalcogenides), nanostructured materials, metamaterials and metasurfaces can be employed to control near-field radiative heat transfer.

Most heat engines would require moving parts and heat exchangers and other ancillary equipment. However, TPV devices are solid-state devices that feature no moving parts and can enable quiet and robust operation.

The thermophotovoltaic work was funded by the Army Research Office, the U.S. Department of Energy Basic Energy Sciences and the National Science Foundation.