At the new plant in Valdarno, situated near the heart of Italy’s Tuscany Region, the company will look to produce up to 18,000 DC chargers per year.

ABB is a titan of the electric vehicle (EV) charging sector. The company has been producing EV chargers since 2010; active in 85 markets, it has already sold nearly 700,000 of them; and its current slate of partnerships includes an agreement to supply Shell with its entire arsenal of charging solutions, to outfit Germany with a nationwide fast-charging network, and to develop megawatt-level stations for German automaker MAN’s upcoming electric long-haul trucks. Naturally, to keep pace and meet those commitments, ABB must ratchet up its global DC fast charger manufacturing capacity.

And it’s starting close to home—in the Valdarno valley of Tuscany, where the company already produces some 80% of its charging solutions, ABB last month opened the $30 million E-mobility Center of Excellence, its largest DC production facility to date.

At 16,000 square meters, ABB’s Valdarno site took roughly 18 months to build, nearly six months faster than one might expect for an advanced facility of the same size, said Stefano Chieregato, the plant’s manager, in an interview with EE Power.

Construction began in July 2020, and the company faced numerous challenges as it grappled with the fallout of the Covid-19 pandemic. Activity at the site was halted for a month, and supply shortages into and beyond 2021 slowed late-stage development. Still, Chieregato’s team was steadfast.

“I am proud to say that we put some Italian approach,” Chieregato said. “We tried to invent something that does not exist in order to get the result and keep the promises to our customer in terms of deliveries and time.”

The result is a facility home to seven production lines that can collectively produce one complete DC fast charger every 20 minutes. The site also features fifteen individual testing facilities, a 3,200 square-meter research and development space equipped with both a climatic chamber and an electromagnetic compatibility (EMC) anechoic chamber, and a plethora of advanced control software. “We control 9,000 devices, and roughly 35,000 parameters,” Chieregato said. “That means we control all the equipment, we can have remote monitoring of the whole plant for maintenance purpose, we control the temperature, the lighting, the air circulation.”

Thanks in part to that level of systems integration, the site’s dedicated R&D team will be able to move quickly through the whole of the product development process, Andreas Mueller, ABB’s head of production engineering, told EE Power.

That’s critical in particular at Valdarno, which ABB touted as an innovative kog in its R&D moving forward; 70 of the 500 employees at the site will focus on producing enhanced and novel charging solutions, in line with the 14% of revenue ABB directed toward that end in 2021. 70 employees at the E-mobility Center of Excellence will focus exclusively on R&D. Image used courtesy of ABB

Much of the emphasis will lie in end-to-end platform components, Mueller said, with the team focused on the design of new power modules and control hardware. To validate those designs,  ABB’s engineers will utilize the site's testing chambers to run components through a gamut of thermal and electromagnetic evaluation.

“We have a very large EMC test chamber where we are able to execute a lot of magnetic emission tests, and that’s very critical for us to achieve the time-to-market that is required in such a dynamic market,” Mueller said. “The team can do a lot of tests early in before we actually take the product and go to the certification bodies to get it formally tested.” That’s key to swiftly handing off the product to Chieregato and his staff for smooth production at scale, Mueller said. And for ABB, whose commitments to Shell alone demand a furious manufacturing pace, hiccup-free production is vital.

In April, ABB entered into a global framework agreement to provide Shell with its full lineup of at-home AC and public DC-based charging solutions. Driven by the deal, Shell will look to deploy 500,000 active charging points by 2025, with plans to quintuple that total by 2030.

Though ABB offered no distinction between at-home and public charging targets—the former are far more ubiquitous—in a press release announcing the deal, those totals are nonetheless ambitious.

As of 2021, there were nearly 1.8 million publicly available charging stations in the world, the vast majority of which can be found in China, whose market for EVs now dwarfs those of both Europe and the U.S., and where Shell has only a limited footprint.

Still, the company appears to be comfortable with ostensible baby steps. In May, it announced plans to deploy the first nationwide network of ABB’s Terra 360 DC fast chargers—which ABB claims are the quickest all-in-one solutions in the world—in Germany. 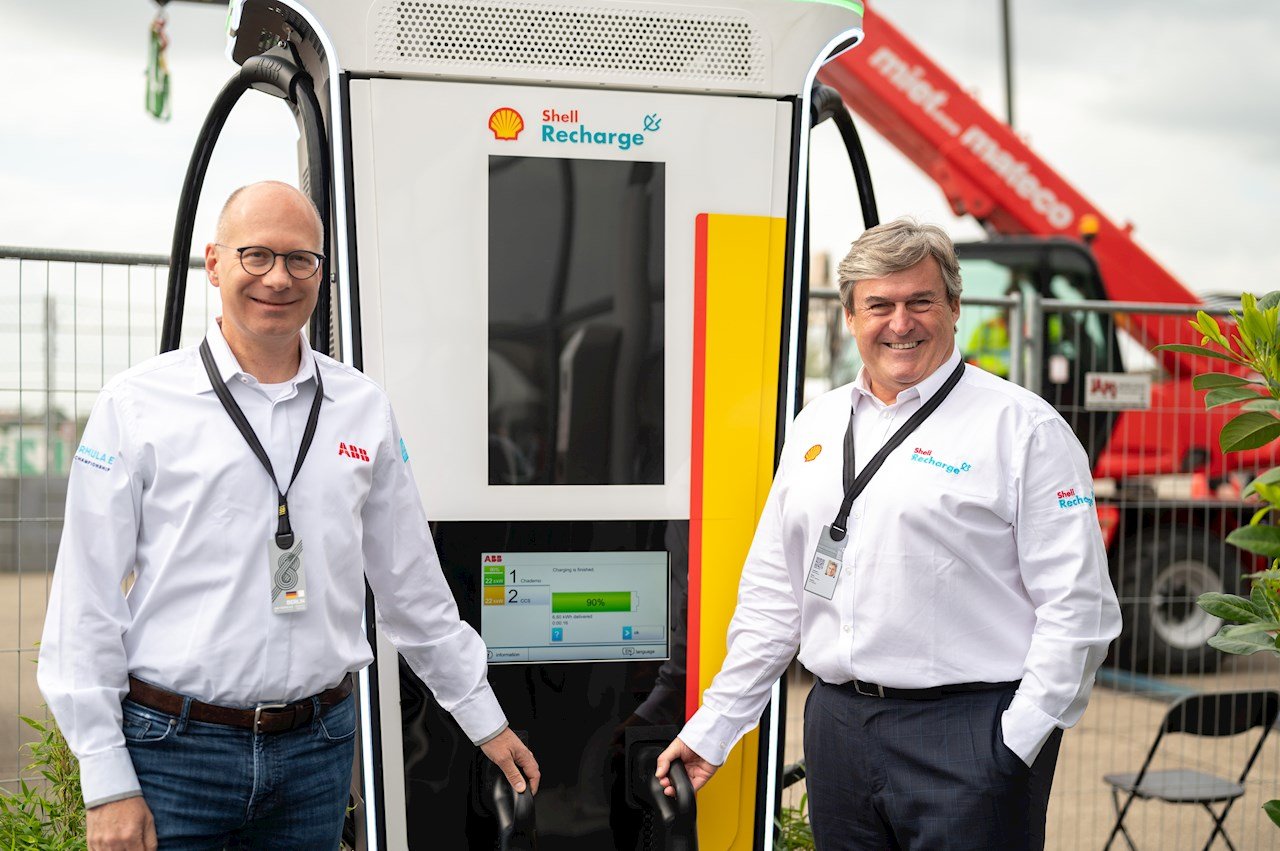 The grand total? The companies will work in tandem to install some 200 Terra 360 hubs throughout the country over the next year.

Many of them will be produced, Mueller said, where they were, in large part, first developed: Right back in Tuscany.