STMicroelectronics’ IPS2050H and IPS2050H-32 are both dual-channel devices that operate from input voltages ranging from 8V to 60V, and tolerate a maximum input of 65V. At 2 A, the internal MOSFETs feature single-pulse avalanche energy of over one joule, making them a reliable choice for driving inductive loads. To enable fast demagnetization, the unit also features a built-in active clamp. 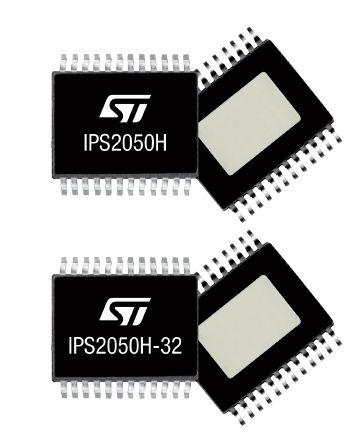 The IPS2050H and the IPS2050H-32. Image used courtesy of STMicroelectronics

High Side and Low Side

Semiconductor switches are often specialized devices designed to work on either the “high side” or the “low side.” The diagram below features high-side and low-side drivers. 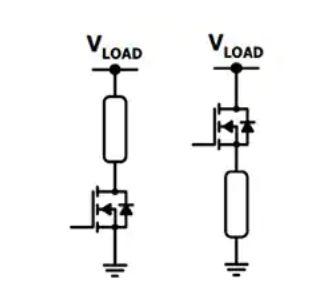 As illustrated, a low-side driver resides between load and ground, while a high-side driver rests between the load and the voltage supply. These positions, given the nature of the driver semiconductor, are of critical importance. They must not be changed.

The IPS2050H features a main current limit that is programmable up to 2.5 A, while the IPS2050H-32 has a maximum current limit of 5.7 A. The devices’ current-activation thresholds and limit values can be configured via external resistors. An external capacitor sets the duration of the startup current limit for smart driving of capacitive loads.

Both units feature RDS(ON)s of less than 50 mΩ, even when the junction temperature reaches 125 °C.

Each IC offers its own set of two activation threshold and limitation levels, for proper driving of both capacitive loads and loads with initial peak current requirements.

For detection purposes, each switch has two FAULT pins, one for monitoring each channel. In the event of overload or overtemperature, the affected pin will deactivate its channel, which can then turn back on only when the temperature has cooled to the reset value.

The X-NUCLEO-OUT03A1 and X-NUCLEO-OUT04A1 are demonstration boards that will help engineers to more quickly evaluate the IPS2050H and the IPS2050H-32, respectively. Both interface with ST's STM32 Nucleo boards, which include associated X-CUBE-OUT3, STSW-OUT03F4, and STSW-OUT03G4 software drivers.