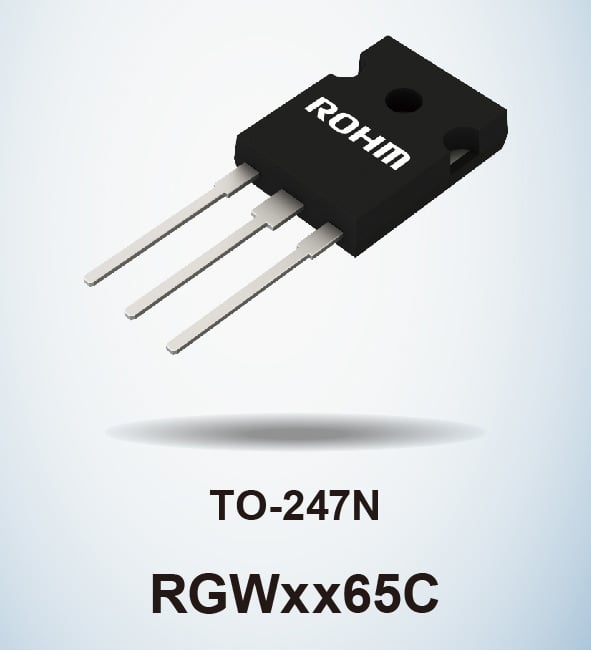 The RGWxx65C. Image courtesy of ROHM

Since the IGBT won’t have to deal with the recovery charge in its turn-on mode, losses here too are reduced. When the units are employed in-vehicle charging applications, these beneficial effects combine to produce a 24% power loss reduction when compared to Super Junction (SJ) MOSFETs and a 67% savings over conventional IGBTs.

Insulated Gate Bipolar Transistors (IGBT) are cheaper to produce than Super Junction (SJ) MOSFETs are. But, they exhibit power losses when being switched on or off, and they require a freewheeling diode to ameliorate the problem, often in the form of a separate chip. SJ MOSFETs, on the other hand, have internal body diodes just by the nature of their structure, but the MOSFETs have limitations in the power they can handle.

With these advantages, members of the RGWxxT65 series offer efficiencies of over 97% over a wide operating frequency range when employed in automotive chargers. That’s a full 3% higher than existing IGBTs at 100kHz.

The Members of the Series

The three units all feature the following maximums:

The RGW40NL65CHRB, RGW50NL65CHRB and the RGW60NL65CHRB are under development. These later devices will also utilize internal SIC SBD freewheeling diodes, but will handle somewhat less current.

These units are aimed at industrial as well as automotive applications that involve high power, such as:

The units are available in TO-247N packages

The operating junction temperature range is from -40 to +175℃

Members of the RGWxxT65 series are AEC-Q101 qualified

ROHM advises that they provide a range of design support materials that are available on the company’s website. These aides include notes on drive circuit design, application notes and, most importantly, spice models.