Today's standard rooftop modules typically show an efficiency of about 17-19%.

However, Insolight says its pre-production module with the aid of the company's optical system to concentrate the sunlight and its multi-junction solar cells has been validated at an impressive 29% by IES-UPM. (See image above). The record comes two years after a first record on a lab prototype. 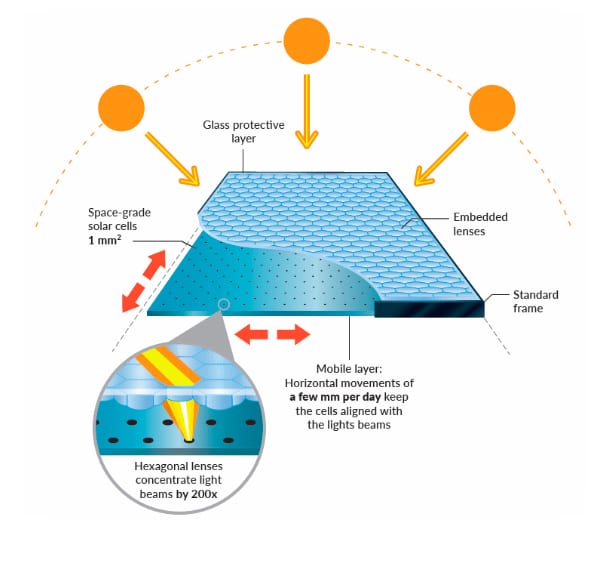 The efficiency validation of the full-sized module is a decisive step towards industrialization for the Swiss company based at the EPFL Innovation Park. The company asserts that the modules will be cost-effective and compatible with existing assembly equipment.

Over the past 15 years, the average efficiency of commercial PV panels has increased by only 3.5 percentage points. The company points out that as conventional solar technologies are slowly reaching their maturity, new approaches are needed to continue making efficiency improvements.

"For the rooftop market, the real challenge is not only to increase efficiency but to do so in a way that combines cost-effectiveness, ease of installation and durability," says Laurent Coulot, CEO of Insolight.

In order to reach such high efficiency in a full-sized module, Insolight uses a unique design. The panel's protective glass embeds a grid of lenses that concentrate light by several hundred times. Under this optical layer, direct sunlight is focused on an array of mult-junction, space-grade solar cells.

With the help of the concentrating optics, follow the sun's movement, only requires the cell array to shift horizontally by a few millimeters each day.

The entire system is encased in a slim module, similar to standard solar panels, which keeps mechanical parts protected. In fact, Insolight says its product has the same form factor and appearance as standard panels and can be easily mounted in the industry-standard configurations, on rooftops, or on the ground.

Furthermore, Insolight says its approach keeps the cost of energy down. Thanks to the optical concentration, less than 0.5% of the total surface has to be covered with cells to achieve optimal performance. This low surface area requirement enables the use of high-efficiency, space-grade solar cells for the mainstream market.

Successful testing at the IES-UPM Institute

In November 2018, IES-UPMhas validated Insolight's pre-production module at a nominal peak efficiency of 29% in concentrated solar test conditions (CSTC). Modules were also tested on a pilot installation at the Swiss Institute of Technology in Lausanne (EPFL) in real-life conditions for a whole year. During this testing, the prototype module successfully endured heat-waves, winter conditions, and storms.

Insolight concept was first tested on a lab prototype by Fraunhofer ISE in 2016, setting a record for a rooftop technology.

"Over the last two years, our team has brought the product from a lab prototype to a full-size solar panel, connected to the grid and monitored 24/7. Our system has been extensively tested and we are now preparing an industrialization strategy for large-scale production", says Mathieu Ackermann, CTO of Insolight.

The system can be assembled as an overlay on top of a standard PV panel. This hybrid approach is especially effective in cloudy conditions, where concentration efficiency decreases, to maintain energy harvesting under diffuse sunlight, according to the company.

In Discussions with Solar Manufacturers

In order to speed up its market entry, the company is now in discussions with several solar manufacturers to license its technology. "Our technology involves a few extra assembly steps, which can be added at the end of existing production lines, taking leverage of production capabilities already in place", says Coulot.

With the help of the combination of high efficiency and the low required surface area, the cost per watt is low. "Our technology can reduce solar electricity costs by up to 30% on rooftops in sunny countries," says Coulot, who expects to see the first Insolight product hitting the market by 2022.