Featuring a broad range of inputs and outputs, the units feature input to output isolations of 3K VAC and 4.2K VDC

COSEL’s MH3 series of DC/DC converters complies with the critical 2MOOP medical isolation standard, with 250VAC of working isolation. Input/output capacitance is specified at a maximum of 20 pF, important for noise reduction, and all members of the series feature ruggedized pin connectors. 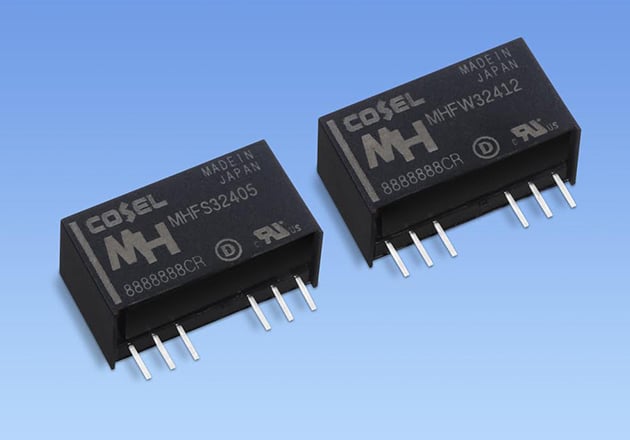 Members of the MHF series of single and dual output DC/DC converters. Image courtesy of COSEL.

The MH3 units are divided into two subsets; the single output MHFS series and the dual output MHFW series.

All members of both series feature built-in overcurrent protection, with automatic recovery and capability for remote On/Off control

To build solid reliability into its MH3 series, COSEL builds on it’s experience with power supplies used in insulated-gate bipolar transistors (IGBT) driver applications. The company applied these lessons to the task of reducing the isolation fatigue often encountered when dealing with high differential voltages.

Thus, the transformers formulated for these units have been specifically designed to sustain the high differential voltages that are common in many industrial applications. And, built with reinforced isolation, members of the COSEL MH3 series are enabled to achieve 3k VAC and 4.2k VAC isolation.

As such, these new devices are well protected against the deleterious effects that could otherwise result from high differential voltage. To aid designers in avoiding these and related pitfalls, COSEL has conducted numerous verifications and tests for its products in its Application Manual. This will enable designers to chart system life expectancies, and point out prudent design rules and potential issues that they might run into.

Critical for medical applications, all units in the both series adhere to the ANSI/AAMI ES60601-1 and EN60601-1 3rd standards, which specify Medical Isolation Grade 2MOOP (means of operator protection) at 250 VAC.

For each of the three specified input ranges, there is a unit featuring outputs of ±12 or +24 volts or outputs of ±15 or +30 volts.

Detailed information on all 21 members of the MH3 series can be found in a comprehensive datasheet. 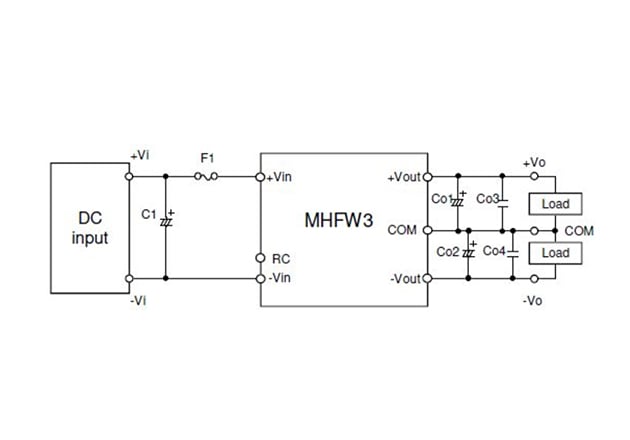 Circuit for application of an MHFW3 DC/DC converter. Image courtesy of COSEL

COSEL MH3 series pins are molded in an epoxy holder, for enhanced reliability. For dependable performance in both medical and industrial applications, the devices are subjected to vibration tests including:

All members of the MH3 series have qualified for the following industrial and medical regulatory approvals: