COSEL’s two versions of its new 80 watt STMGFS80 converters will round out the company’s existing 15 and 30 watt devices. The new unit features the same footprint as its 30 watt predecessor, facilitating easy upgrades. 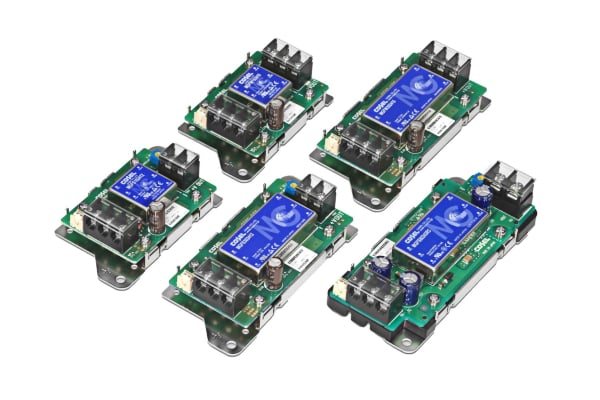 The STMGFS80 is based on the company’s MGFS80 DC/DC converter modules, now assembled onto a carrier board. The new unit includes a potentiometer which is used to make adjustments of the output voltage. It also features terminal blocks, extra capacitors, and an input filter. DIN rail mounting is available as an option.

The STMGFS80 endows the MGFS80 DC/DC converter modules with a rugged mechanical platform and industrial mount packaging. These augmentations, in addition to the other features described, make the STMGFS80 suitable for tough industrial settings.

STMGFS8024 operates from inputs over a 9VDC to 36VDC input range, enabling it to be powered by the 12V and 24V industrial power rails.

Its counterpart, the STMGFS8048, can accept power inputs from 18VDC to 76VDC, allowing it to work with common 24 and 48V systems.

Because in both cases, the highest acceptable input voltage is four times greater than the lowest acceptable voltage, these units can be described as having 4:1 input ranges.

The two models provide a choice of three outputs:

Each of the outputs can be adjusted, ±10%, via the potentiometer included on the motherboard.

Both STMGFS80 versions can be mounted directly onto an equipment chassis. The converter can also be attached to a DIN rail by means of COSEL’s (N2) option. If needed, a plastic cover is available. By Q2 of 2022, the company expects that a combined DIN rail and cover option will be available.

Complete information can be found on the datasheet.

The new converters will find application in the following industries:

The new units adhere to: