The PDC 250-HSA series is aimed at heavy-duty industrial applications. The latest addition to the company’s line of fully encapsulated, convection cooled DC/DC converters, the industrial quality units are cooled by convection cooling made through its heatsink assembly block. This is achieved with no need for either contact with a heat sinking surface or for forced airflow. 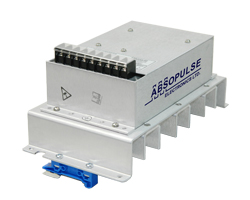 Members of the Series

Output regulation is 1% or better from zero to full load, and across all specified line variation. At full load, converter efficiency is specced at 80%.

The Benefits of Encapsulation

Encapsulation of the converters protects internal components from ambient dirt, dust, pollutants, and moisture. It also assures that any heat generated in the apparatus is dissipated throughout the entire module.

Potting involves filling the unit’s interior with a MIL-grade silicon rubber compound with a UL94V-0 flammability rating. This serves to provide immunity to shock, vibration, and humidity. Because the compound employed is also thermally conductive, it also serves to improve the process of even heat distribution.

The heatsink assembly block, HSA-P59, was designed specifically for the encapsulated module, and is shown under the module in the earlier illustration. It can be mounted either on a chassis or on a DIN-rail, with the mounting clips that are provided. Additionally, it can be mounted even on thermally non-conductive surfaces, such as plastic, wood, or bricks. Absopulse provides a complete dimensional analysis of the heatsink assembly block.

Short-circuit protection on the output

In the event of insufficient cooling, there is thermal shutdown with automatic reset

Members of the PDC 250-HSA-P59 series are suited for operation in extreme environments such as: