The company optimized the R60xxJNx series for EV charging stations and motor drive in home appliances such as refrigerators and air conditioners (ACs).

Some estimates say that about 50% of the total power demand worldwide is used to drive motors, Rohm noted. With the continued spread of electrical appliances in emerging and developing countries, this percentage is forecast to only increase, the company says. 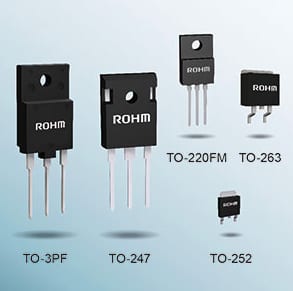 IGBTs are frequently used as switching elements in inverters that drive motors in home appliances including refrigerators and air conditioners.

Recent trends of improving energy savings has inspired the demand for MOSFETs with reduced power consumption during steady state operation. To meet this need, Rohm first launched the PrestoMOS™ series of power MOSFETs in 2012.

According to Rohm, the PrestoMOS series features the industry's fastest reverse recovery time, resulting in lower power consumption. As with its conventional products, this new series employs Rohm's proprietary lifetime control technology to achieve ultra-fast trr. This enables a reduction in the power loss of approximately 58% at light loads compared with IGBT implementations.

(Click on the image of the chart and graph to enlarge)

Additionally, increasing the reference voltage needed to turn on the MOSFET prevents self turn-on, which is one of the primary causes of loss.

Moreover, optimizing the characteristics of the built-in diode allowed Rohm to improve the soft-recovery index that is specific to super junction MOSFETs. The improved soft recovery index reduces noise that can lead to malfunctions.

In relatively low current conditions, the MOSFETs provide advantages such as high switching speed and low conduction loss. For example, in air conditioners, they are more effective than an IGBT in reducing power consumption during steady state operation.

Switching speed increase, self turn-on, and noise generation are conflicting phenomena, thereby making it necessary to optimize circuitry by adjusting the gate resistance and other factors during circuit design. Unlike general-purpose MOSFETs, Rohm's R60xxJNx series takes measures against noise and self turn-on, giving customers a great degree of design freedom.

Optimizing the parasitic capacitance inherent within the MOSFET structure allowed Rohm to reduce the unintended gate voltage during switching by 20%.

Also, the specialized design makes it difficult for self turn-on to occur because they increased the threshold voltage (Vth) necessary for turning ON the MOSFET by 1.5x. This increase expands the loss adjustment range due to gate resistance and other factors. 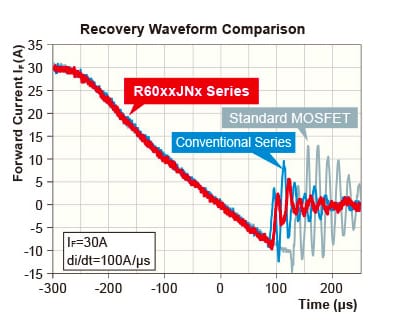 This improved soft recovery index makes it easy for customers to adjust noise such as the noise that results from gate resistance for example.