Custom values are available within a capacitance range of 8,000µF to 20,000µF, with working voltages ranging from 6.3 to 24 WVDC. The company plans to extend the series to higher operating voltages later in the year. Operating life is 2,000 hours @ 125° C.

The PPC is rated for 10g peak for vibration and withstands shocks up to 100 g’s (MIL-STD-202, Method 213, Condition I).  With flat tin-plated copper terminations, it is possible to mount the device off-board or directly to a PCB.  Mounting is by means of 3M double-sided VHB tapeTM, to ensure that the entire capacitor surface is kept rigid.

Developed by Cornell Dubilier, the PPC is the latest leading-edge capacitor development by the company. These designs have been responsive to market demands for capacitors that provide higher performance while breaking away from traditional cylindrical form factors. 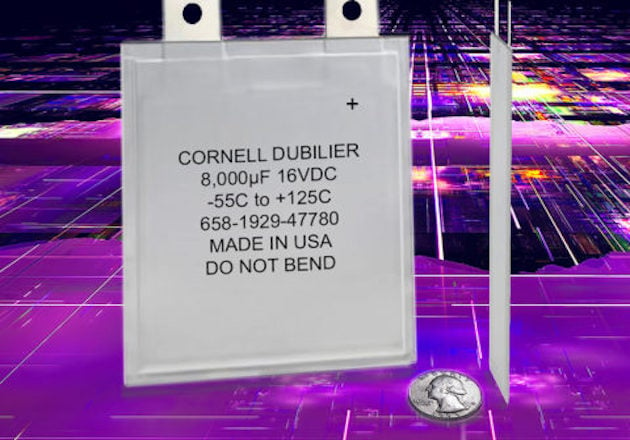 Cornell Dubilier’s roots can be traced back to 1909 when founder William Dubilier first used a glassy mineral called mica to help form a “condenser” (now called a “capacitor”). While the mica capacitor saw limited success for its intended application, it went on to revolutionize radio broadcast communications allowing for better transmission over longer distances. Growth and Prosperity Soon after inventing the mica capacitor, Dubilier started manufacturing capacitors and contributed to World War I by developing a system to detect submarines. The Dubilier Company was the earliest commercial manufacturer of capacitors, and in 1933, merged with Cornell Radio to form Cornell Dubilier Electronics (CDE). Fueled by the rise of radio and television broadcasting, the company experienced phenomenal growth, and by 1966, possessed more than 350 patents in radio and electrical sciences. Over time, the company grew even more to become one of the largest capacitor makers in the world. A Global Leader A privately held, American owned company, Cornell Dubilier Electronics has earned a global reputation for manufacturing quality, high-end capacitors. Almost all of the company’s capacitors are used in demanding industrial applications, separating themselves from the competition.